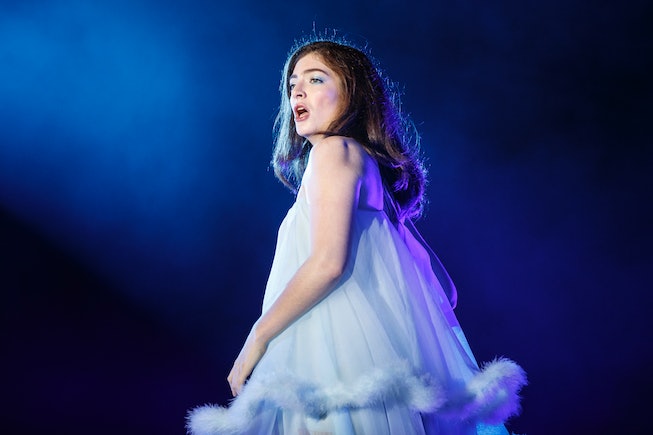 Lorde has blessed us with a new song from her upcoming 12 track, album, Solar Power. The melancholy song, titled, “Stoned At The Nail Salon,” explores the familiar feeling of dissociation and grappling with different versions of oneself.

“This song is sort of a rumination on getting older, settling into domesticity, and questioning if you’ve made the right decisions,” she explained in a press release. “I think lots of people start asking those questions of themselves around my age [24], and it was super comforting to me writing them down, hoping they’d resonate with others too,” she added.

“Stoned At The Nail Salon” was co-written and produced by Jack Antonoff, who also worked on Lorde’s previous single, “Solar Power” and famously produced her Grammy-winning 2017 album, Melodrama. In Lorde’s newsletter — which you can subscribe to on her website — the singer shared a selfie taken during their songwriting process, along with a clip of Antonoff practicing a chord progression.

She told Zane Lowe for Apple Music that in addition to Antonoff, Clairo and Phoebe Bridgers also sing on the track. “This is pretty much all Jack just start playing everything,” she said. “Playing bass, playing beautiful guitar, and then I arranged all the vocals. Had Phoebe, Clairo, and the boys come and sing. But yeah, it's definitely one of the quietest, most introspective, and internal moments on the record.”

“It's a weird song to even talk about,” she continued. “It's about the passage of time, which is a weird thing to even think about and be in conversation with. But thinking about me at 16, my parents getting older, all these big, heavy things really confronting my mortality, I split off when I think about this song, but I am proud of it.

In her newsletter, Lorde talked more about writing the song with Antonoff. “I found this cute pic of us the day we were writing it. It’s pretty cute that we’re gonna perform this on Seth tonight the day it comes out, shoulder to shoulder, two years and change to the day that we wrote it.” As she mentioned, she and Antonoff will perform “Stoned At The Nail Salon,” tonight, July 21st, on Late Night with Seth Meyers.

Lorde is also expected to do a “full takeover” of the talk show, and participate in Meyer’s signature “Day Drinking” segment. Until then you can listen to “Stoned At The Nail Salon” on Apple Music and Spotify, and stay tuned for updates on Solar Power, which is set to be released on August 20, 2021.

To conclude her newsletter, Lorde wrote, “I hope you love this song and this side to the album. And I hope if you’re someone who also has a habit of tiptoeing up to a deep thought, then doubting yourself or dissociating, you know you’re not alone.”

Listen to “Stoned At The Nail Salon” below: