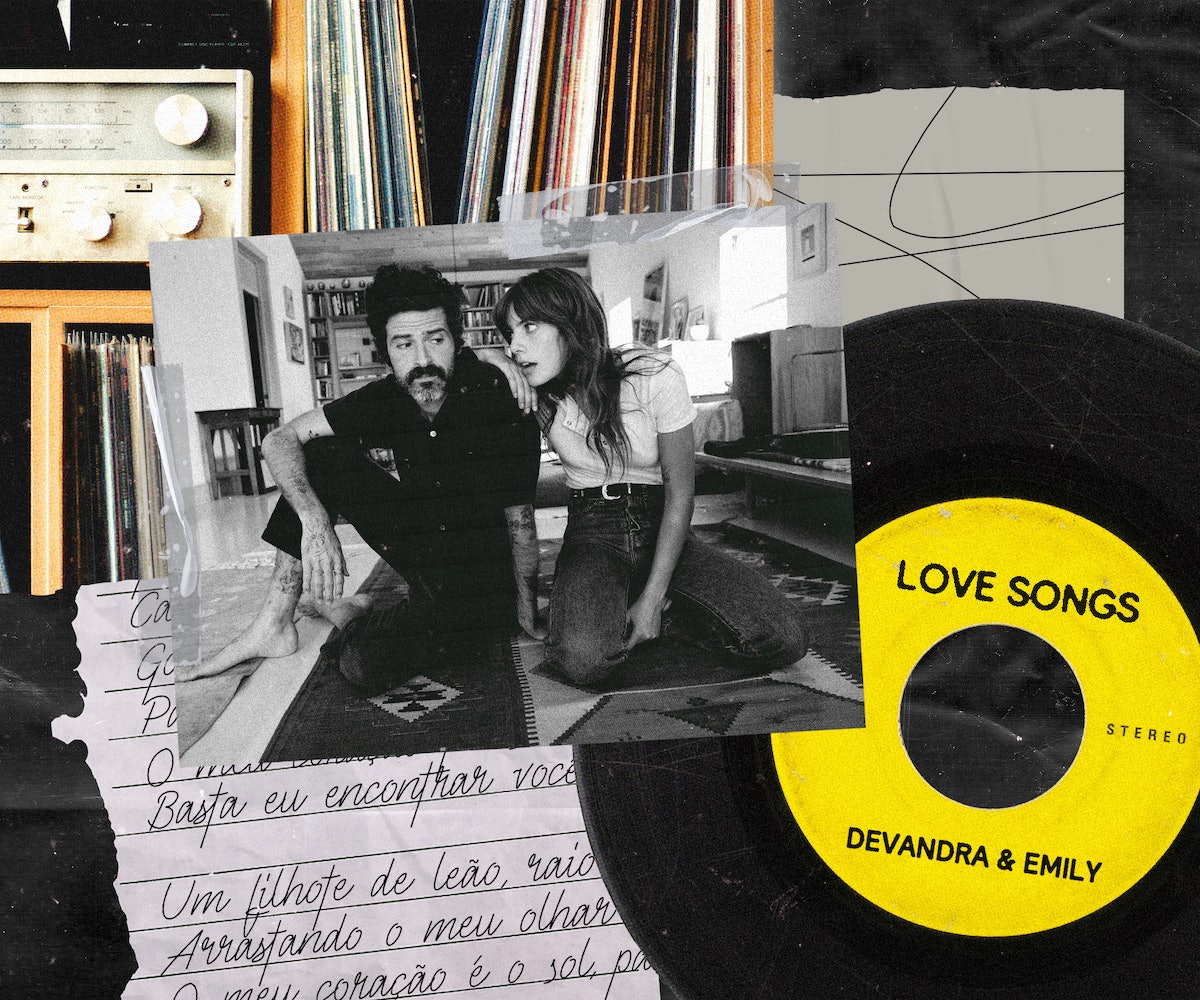 This is Love Songs, a series in which NYLON speaks to the coolest couples out there on how they met, when they fell in love, and the songs that define their relationship.

It started out like the typical day at the local health food store in Los Angeles. Devendra Banhart and Emily Labowe were in parallel check out lines — he was grabbing paper towels, she was stocking up on yogurt and kombucha — when they caught each other’s eye. Labowe wasn’t about to let the moment go to waste. Once she was out of the line, she grabbed a seat outside and pretended to snack in hopes that Banhart had picked up on the same vibes she was feeling. Her plan went off without a hitch.

“I was hoping he would [talk to me]. I sat outside to fake-eat my lunch,” she remembers. “He had told me he had just got back from Japan, and he didn't ask for my number, he just asked for my full name.”

Banhart admits that he may not have felt courageous enough to full-on ask for Labowe’s phone number, but in the spirit of modern romance and armed with her government name, he found her on Instagram and sent her a DM. The flirtations led to their first date, and with frisson in the air, the next logical step was clear: seal the evening with a solid first kiss.

“We were at my house and I had music playing, but I kind of thought, okay, what's the most romantic mood? Oh, ‘Avalon,’” says Banhart. “‘Avalon’ seems like a really cinematic moment for a first kiss. And it worked out that way that. We're having a Dawson's Creek kiss moment and ‘Avalon’ started to play. It was really nice because we were naturally leaning into each other and then that song came on.”

Fast forward four years later, and Banhart and Labowe are in love and soon to be collaborators on a forthcoming clothing capsule. It’s a simple venture — three pieces consisting of a top, bottom, and an overcoat embroidered with Banhart’s designs — but one perfectly within the couple’s creative wheelhouse. From Labowe’s end comes the necessary manufacturing experience from her underwear line, Poppy Undies, and from Banhart’s comes a zest for fashion.

Banhart waxes poetic: “I love fashion because it really can affect how I feel. I put on something, it just doesn't fit right. I just feel pure shit. And I felt something I really like, the material feels good, the cut is nice. It really just actually changes my outlook. It can be this kind of simple, direct form of kind of mood enhancement. It can help you kind of focus a little bit more, get into a little bit more of a work-mode, or it can help you actually feel more comfortable in your own skin. Feel more comforted even. I think it really has a tremendous use.”

The clothing capsule marks the the couple’s first-ever collaboration, and morale is high. “I am so inspired by watching him, his music, and his art,” said Labowe. “I feel so lucky to be able to do something with him.”

“I just Venmo Em 400 bucks to say that,” quips Banhart and Labowe bursts into laughter.

Below the couple breaks down their favorite love songs, from the legendary Brazilian singer-songwriter Caetano Veloso to the best shoegaze tracks to amp up a dreamy mood.

“A classic from the one and only Caetano Veloso. It means “Little Lion” in Portuguese. This song has been with me since I was a teenager, and when we heard it together, Em immediately said ‘Oh wow, this is our song!’”

“The ever mercurial Vitaly Vladasovich Grachev or more simply known as Vitus, caught our attention on Opera #2 with an amazing falsetto, but it was his viral hit 7th element that stole our butts and hearts. It’s catchy and fun and insane in the best way!”

“Ah, the sound of Lomanx, which is of course a combination of luxury and romance. These sleek sounds were the soundtrack to our first kiss.”

“All My Trials” by Nick Drake and Gabrielle Drake

“This is one of the songs we often sing together at home. It’s a heartbreaking song about a mother singing to her children on her deathbed, telling them not to cry too much, telling their trials will be over soon. It’s so beautiful and devastating.”

“This shoegaze classic always puts us into a dreamy mood.”

“The Jandek of romance, Lewis!”