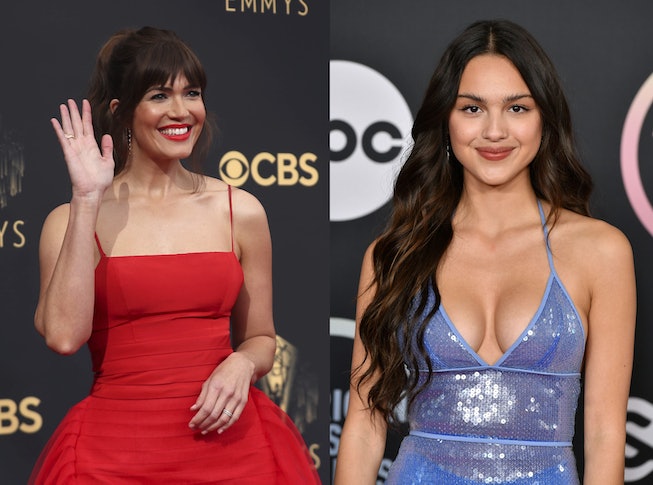 Are celebrities getting better at knowing what’s going to make headline that will get picked up by half a dozen publications? Each week, Lady Gaga is dropping bombs that have landed House of Gucci in the press months after its release and lukewarm critical response. (Last week’s tale? Patrizia Gucci apparently put a hex on Gaga.) Julia Fox and Ye’s romance has already spurned a year’s worth of discourse in a few weeks. Now, Mandy Moore knows the exact combination of words to reach SEO nirvana.

Moore, who’s currently starring in the trauma-porn network TV show This Is Us (which I may or may not have watched two seasons of just to find out how Milo Ventimiglia dies), recently told People she’d like to see A Walk To Remember rebooted, starring none other than Olivia Rodrigo. It’s been 20 years since A Walk To Remember — the devastating film based on the Nicholas Sparks book starring Moore as a terminally ill girl with a voice of gold who falls in love with a boy (Shane West) before her untimely passing to cancer — premiered.

Since nothing is sacred and everything else is getting rebooted, from the mess that is the And Just Like That to a strangely dark Fresh Prince of Belair reboot to a reboot of How I Met Your Father, which at least gives us a chance to see Hilary Duff and Kim Cattrall onscreen again, why shouldn’t the iconic 2002 teen film get its moment in the sun? And who better to star than Olivia Rodrigo, a singer who has made her entire brand the year 2002? Plus, Rodrigo’s pipes could really tackle “Only Hope,” which is perfect for her soprano range.

“I would love that," Moore told People of a reboot, adding that she could envision who would play Jamie, the lead role. “I don’t know, Olivia Rodrigo or something like that," Moore said, adding, "Someone could redo this film." You hear that? That’s the sound of Hollywood producers scrambling to secure funding.

"I would love to see it. It's been long enough that, yeah, I feel like we've earned our place in cinematic history for a reboot at this point," Moore said.

Moore shared her wish for a reboot as part of a bigger interview to celebrate 20 years since the film, where she and West shared behind-the-scenes details of the film, including that they had crushes on each other. Aww. "Somehow, we sort of just had this really natural, effortless chemistry with one another," Moore told People. "And I think that comes across in the film and that's hard to get. You can't really fake that."