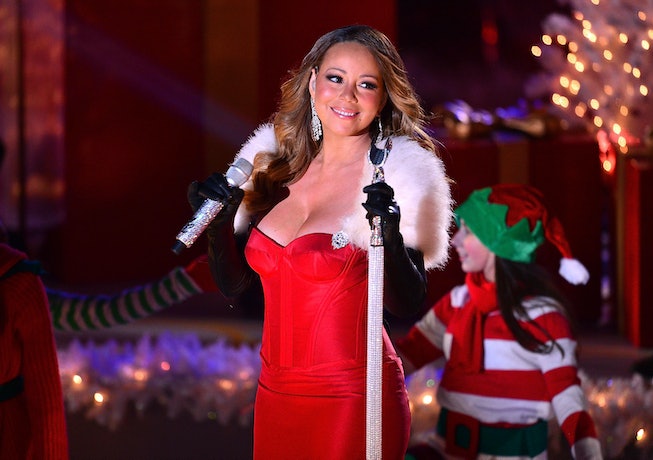 MSCHF, the Brooklyn art troll collective that made Grimes’ Met Gala sword from a melted down AR-15, is back at it with a holiday art prank in honor of Mariah Carey season, known to some as simply “the holiday season.”

Hearkening back to the suspense of buying a pack of Pokémon cards and not knowing if you’re going to get a Charizard or another Oddish, the contents of the Mariah Carey booster packs will be a secret until you rip them open. But they could include anything from Mariah Carey’s Amex Black credit card to a Target receipt to a movie ticket stub for the 2001 universally-panned film Glitter starring Carey. Or maybe you’ll be lucky enough to snatch an Emotional Support Animal card for Carey’s Jack Russel Terrier, Mutley. It’s not all goofy little cards though. You could also, depending on what your definition of “gift” is, get some real gifts, like a $100 Macy’s gift card, $50 to Panda Express, or $25 to Build-A-Bear workshop.

“Riffling through someone else’s wallet combines voyeuristic delight with the thrill of playing a lottery,” writes MSCHF on the site. “Outdated ID photos, taken once at the onset of adulthood, nestle among coupons, receipts, and membership cards. A stranger’s wallet offers a tiny snapshot of their habits, and we flip through it out of curiosity as much as for the chance to lift a rumpled fold of bills.”

They continue: “In this sense, a wallet symbolizes identity beyond literal documents of identification. But that’s boring. Let’s treat the contents of your wallet with the same frivolity as trading cards: we’re swapping the extremely personal with the extremely interchangeable. Whenever you find a wallet on the street, think ‘What did I get!?’ and ‘This could be me!’”

MSCHF is known for kitschy little art pranks designed to go viral, like Lil Nas X’s satan shoes, Axe No. 5, which combined Axe Body Spray and Chanel No. 5., and This Foot Does Not Exist, a bot that texts you computer-generated photographs of feet that do not exist. Boosted Packs is their 56th project. The packs drop on December 2, and will be available in packs of five cards or a box with a set of 50 cards. You can sign up for text alerts on the booster pack website. Here’s hoping someone gets the Mariah Carey New York State ID, though there’s a missed opportunity for the Mariah Carey vax card, IMO.