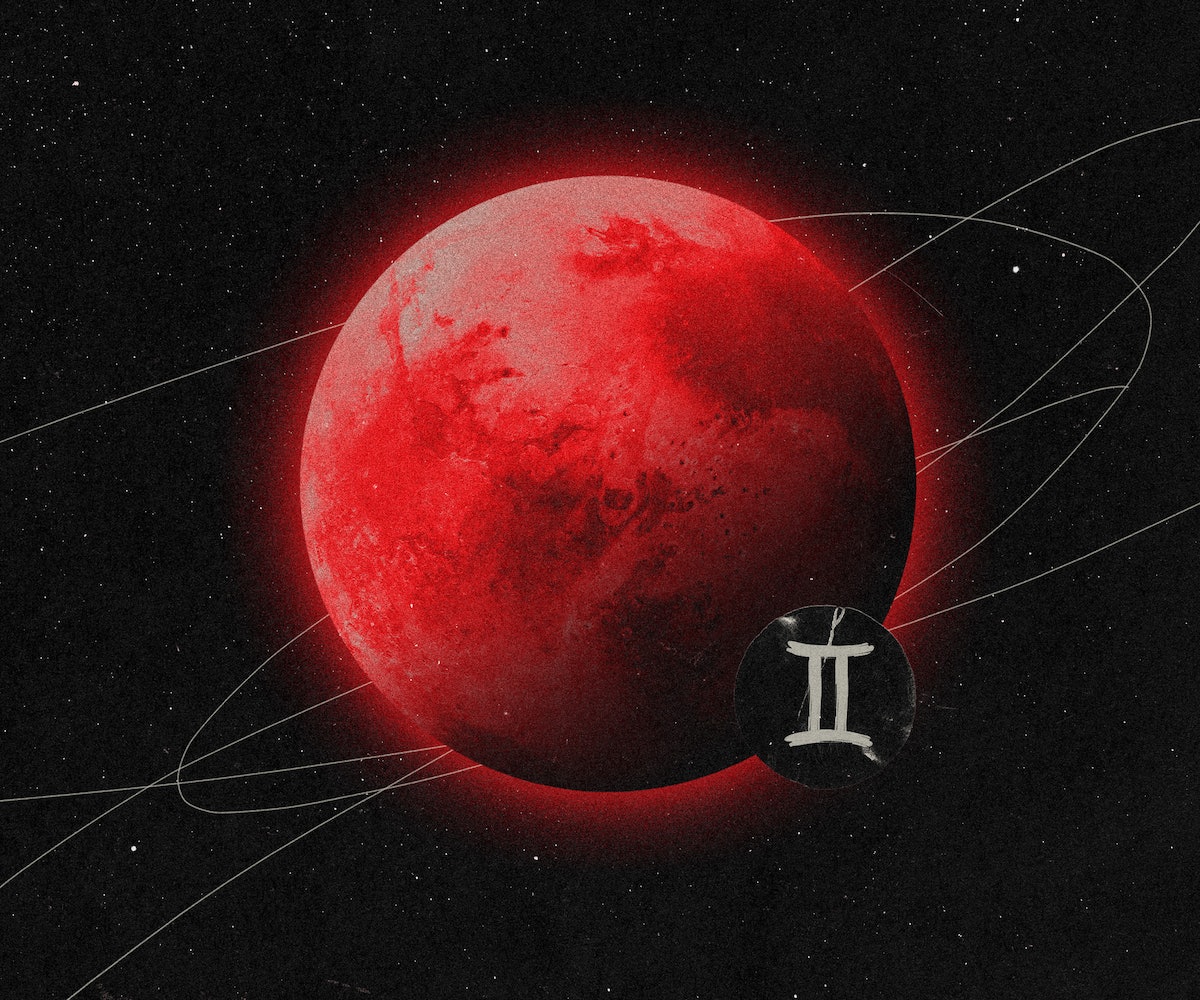 From August 20, 2022 through March 25, 2023, the fire planet Mars will waver for an unusually long period in the air sign Gemini. Mars usually spends about two months in each sign, but, thanks to a retrograde going down October 30, 2022–January 12, 2023, we’re in for an extended journey: one which will likely tap us into the wide variety of our talents, and leave us ambivalent about how to use them. Here’s how Mars in Gemini, and the Mars retrograde, will affect you and the world around you.

Your sun sign may be the protagonist of the chart, but, as evinced by Dorothy of Oz, it’s rarely the hero who drives the plot. Enter Mars to claim the villain edit and set things in motion. If your sun is your identity, then Mars is the raw ego, driving you to evolve, excel, and attack your ambitions. Named for the god of battle and conquest, Mars seeks victory, and thrives in relational conflict and sexual catharsis. Mars rules Aries and Scorpio; its position in your chart, therefore, reveals where your individuality, and your power, are declared. This isn’t always so selfish; sometimes, a warrior is needed to defend the ones they love, or fight for something that matters. Mars leads the charge. Of all the planets, Mars most interfaces with your physical body, as a vessel of creation and destruction.

As Mars moves through the zodiac, it comes into clashes and alliances with other planets, often setting off conflicts with authority (Saturn) or providing motivation for abstract dreams (Neptune). Naturally, it gallops through signs like Aries and Capricorn, inspiring action and leadership; and struggles to find footing in hyper-relational signs like Libra and Pisces. What happens when the prize fighter enters Gemini’s domain?

MARS IN GEMINI: THE LONG HAUL

When the planet of decisive action enters the sign of duality, it feels like every path is suddenly split, like your Link has gone from the linear action of Majora’s Mask to the wide open world of Breath of the Wild. Gemini is a mutable air sign, without identity or set purpose, a channel meant to capture and transmit the culture around it. When Mars enters Gemini, it can explore a vast range of talents, options, and possibilities. But with that choice comes indecision, ambiguity, and paralysis; like scrolling for a streaming movie, never deciding on one, and losing interest along the way.

Gemini rules our direct experience: the people, stimuli, and social noise around us. This is not a sign known for perspective or wisdom. When the ego planet enters such a myopic domain, one’s ideas, however specious, become beliefs, and suddenly worth fighting for. With the United States’ November midterm elections going down during this transit, count on a surge of ignorant political leaders and social media martyrs to take a stand for their points of view, regardless of any basis in reality.

The voting booth, where we are meant to exercise personal choice, will further become a battleground, and, even in states without rabid gerrymandering and racist voter suppression, a general doubt over the point of one’s vote will set in. With so much over-stimulation and doom messaging, this latest era of post-economic meltdown malaise will make everyone wonder what they want to do next, if their choices matter in the big picture, and why they should even bother.

MARS IN GEMINI: THE POINT

As with any Gemini transit, this one has two faces. On one front, you’re in for a further lurch, a sense of confusion regarding your destiny. The radio dial to your calling has snapped; you’re now hearing a blur of frequencies, and can’t find your channel. But with that big-picture uncertainty comes the freedom of experimentation, play, and possibility. In Gemini, Mars has access to more talents than ever. Now is the time to study, train, and take in new inspiration. Cultivate what media you’re exposed to and who your masters and teachers are. Counter the twins’ limited point of view by expanding your range of exposure. Gemini adapts through communication; take this time to play with songwriting, essays, or, most vitally, direct dialogue with others. Seek out collaborators, book club nemeses, and anyone else who can inspire friction through contact. Gemini needs something to react to, as well as someone to channel. On the spiritual front, this is an ideal time to get in contact with your guides, ancestors, and higher powers, and to clear your vessel to best receive them.

You are not supposed to know where you — or your country — are ultimately headed. This is your time out of the world when you can expand your skills, even if you don’t know how they’ll be put to use. Throughout this transit, Jupiter will continue working through Aries, inspiring the next generation of artists and heroes to create. With Mars in Gemini, you have time to come into your powers, even if you’re blind along the way. Train hard now; we’ll need you on the other side.

From October 30, 2022 through January 12, 2023, Mars will station retrograde, furthering Gemini’s inborn ambivalence. Along with the aforementioned election chaos in November, count on all manner of dropped initiatives, pulled projects, and sudden, severe changes of plan, a la the recent shelving of Batgirl. This will not be a time of consistent or dependable leadership; don’t count on anyone to show you a way forward out of this mess.

On a personal level, be wary of any big plans, grand identity signifiers, or declarations of purpose. Any lightning strikes of clarity or direction should be given a few days to integrate; you may find yourself losing steam, or doubling back on yourself, no matter how sure you were just a few days ago. Mars retrogrades are not times for output, but for observation, review, and downloading. Connect with your influences and mull over the path you’d like to take. If David Lynch and Jane Campion can go years between making movies, you can take half a year to think about your life. As the Queen Mary instructs, on The Crown: “To do nothing is the hardest job of all. It will take every ounce of energy you have.” Take your time. Don’t rush to Cloud City just because you think you should. It might be a trap. Complete your training. You’re not ready to face your destiny just yet.

This article was originally published on Aug. 15, 2022