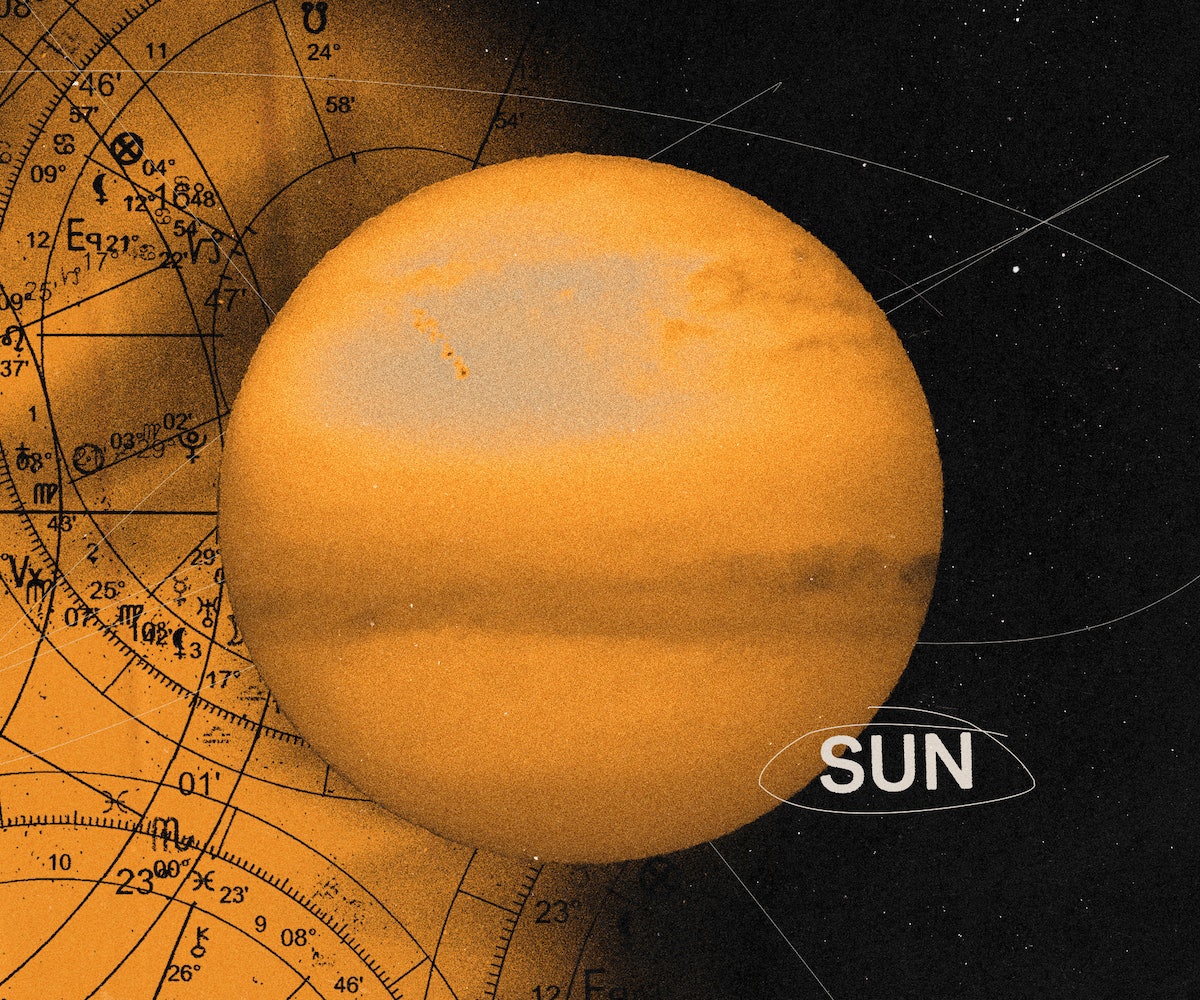 In a cosmos of endless tumult, one constant remains: the sun. Though astrology works on a geocentric presumption that the planets revolve around the earth, the real star of the saga will always be Sol. Though every planet and asteroid in your chart could be considered a main player — with the chart ruler getting top billing — the sun will always be the protagonist. Burning eternally and radiating through the heavens, the sun represents your outward projected self: namely, your identity. Where you shine brightest — and what puts your flames out — comes down to the placement of your sun, and its relationship to the other planets. For insight into the center of your universe, consult our guide below.

The direction of your chart, and therefore your life path, is dictated by your rising sign. Once the stage is set, each planet takes their chosen role: the moon speaks to your inner needs; Mars drives your ambition; Uranus introduces chaos. The sun, then, is the hero of the story, the brilliant, exalted, shimmering self. In his Complete Astrology, Alan Oken describes the sun as the “generator of life; the motivating power behind all activities;” the Orphic Hymns describe it as the “source of existence, pure and fiery bright.”

The sun will speak to your sense of health, vitality, and clarity of selfhood. Nearly every religion in history has worshiped some form of solar deity, from the Egyptian Amun-Ra to the Aztec Quetzalcoatl. Though pop astrology has overemphasized, and oversimplified, the role of the sun, making people forget about the other logistics of their charts, its sign placement asks a massive question: How do you project the light of the divine?

The Orphic Hymns refer to the sun as “the world’s great despot, and o’er all supreme.” In our solar system, there is only one Sol. The sun not only blasts your identity outward, but defines your surroundings based on your ego. Ruling Leo, a powerfully-placed sun can help you realize your inner dignity and regality. But left unchecked, Helios can distort everything and everyone into a narcissistic self-projection; the universe is you. Those with suns in Aries, Taurus and Leo often fail to see outside their own feelings and beliefs. Meanwhile, the sun will often find itself subsumed in Gemini, Scorpio and Pisces, drowned in the noise of others. As for Sagittarius and Aquarius suns…good luck locating them in our galaxy.

House placements deploy your sun to its optimal window of radiance. Those with suns in the third house of self-expression may be able to communicate with anyone; meanwhile, in the 12th house of processing, more subdued personalities unleash their solar rays through artistic release. If you don’t fully identify with your sun’s sign, its setting may indicate your point of divine arrival.

THE SUN & OTHER PLANETS

The sun shines light on any planet it touches, incorporating their gifts into your composite identity. Depending on the nature of the relationship, those planets can expand, exaggerate, or crush your healthy sense of self. Charts with Leo on the ascendant are ruled by the sun, and those born with their sun in Leo will be called to embody its consistency and courage.

Here’s how connections to other planets play out for the sun: through conjunctions (immediate and intense alignment); trines (60 degree, collaborative angle); squares (90 degree challenge from a “backseat driver”); and oppositions (180 degree confrontation, or faceoff). Remember that harsher aspects, like squares and oppositions, often lead to growth, change, and metamorphosis; rarely is there such a thing as a “cursed” placement. And, as Oken warns, “a ‘fine’ aspect does not necessarily make a fine person.”

The sun burns unceasingly, while the moon, itself lifeless, can only reflect the light of Helios. Squares (quarter moons) and oppositions (full moons) expose and illuminate those inner needs, desires and resentments that the outside world cannot always see. How does your inner life conflict with the public image? When the sun and moon are conjunct, your outer shell and juicy core are in harmony, but you’ll have to work to cultivate perspective outside of your sign’s POV.

As the closest planet to Sol, Mercury can never stray more than 28 degrees away, making it the Aaron to the sun’s Moses, or the Ron to Helios’s Harry: a voice and emissary of your purpose. Oken writes that when these two are too close (within eight degrees), “the individual has a difficult time depersonalizing his thoughts so that a wider spectrum of understanding can be made possible.” When in separate signs or houses, the sun and Mercury better lend one another perspective and understanding.

Another close pair, these two can’t go beyond 48 degrees of each other. Where Mercury announces your mission, Venus wears it, staging your arrival so that the world can receive and relish in your gifts. Like Victor Melling in Miss Congeniality, Venus provides the necessary makeover to best suit the sun’s purpose. A Capricorn sun may obsess over traditional success, but find bohemian pleasure through their Sagittarius Venus. An Aries sun may climb tirelessly to accomplish their goals, but their Venus in Pisces will ensure that their gifts serve the people.

The sun is the hero of your chart, and Mars is the warrior. How they align will reveal the intensity of your ambitions, and the way you approach conflict. The two can indicate a constant craving for competition and aggression, perhaps projected from early childhood, that sets you against the world. This can make for a healthy fighting spirit, or cast you as the eternal underdog (or bully). Martian urges are not intrinsically negative; when properly integrated into your identity, they give you something worth battling for. Just make sure you’re not at odds with the people on your side of the ring.

What’s not to love? When the star of our solar system interacts with its biggest planet, expect a spectacle. Jupiter enlivens any planet it meets, but when in contact with the sun, it can make you the life of the party — who may have a hard time calling it a night. As the planet of wisdom, experience and expanding horizons, Jupiter can direct the sun on spiritual and intellectual journeys, which can lead to a life of adventure, aimless wandering, or both. Jupiter will inspire you to fly for the sun. Just make sure your wings don’t sizzle and burn.

The sun is the young hero, and Saturn is the father figure teaching rules and responsibilities necessary to attain mastery. Depending upon its placement, Saturn can act as a stern but supportive Obi Wan to your sun. But harsher placements make Saturn into Darth Vader, the big bad daddy who appears in every lover and employer, ready to crush your independence. Sun-Saturn dynamics often produce the brassiest of Broadway dames, those spirits who have clawed through hardship to prove they’re still standing. Just as often, it leaves you hiding in bed, exhausted and afraid of the world. Embrace their dynamic, learn accountability, and you’ll be the master of your destiny.

The prodigy and revolutionary will inspire your sun with bolts of brilliance. But regardless of the aspect, this is not a gift to be shephered on any linear timeline, or for any traditional form of profit. Uranus acts through chaos, and its gifts, as projected by your sun, can make you into an eccentric genius…and a total mess. Look to Saturn for help reigning this combustive, creative, mad duo into check.

Neptune connects you to the collective imagination; when filtered through the sun, it makes you a creative vessel of the people. But, under the tsunami of Neptune’s interconnected influence, the stable identity of the sun can be drowned, leading to blurred self-definition, weakened vitality, and indifference to one’s personal stake in life. Tether yourself to reality, lest you lose yourself forever in the tide.

What happens when the god of the heavens journeys into the underworld? In The Astrology of Fate, Liz Greene describes how “collective fate intrudes upon the life of the individual,” with sun-Pluto placements, “and may demand great effort and sacrifice,” offering “a renewal of life through seeing life with different eyes.” Essentially, your ego, your above-ground presentation, and your assumed life course are up for constant destruction and recreation. Pluto, the karmic generator, will drag your identity into hell until something of higher service to humanity emerges. Don’t hang on to who you were, and do whatever it takes to ensure that your trips down below have a return ticket.

WORKING WITH THE SUN

The Sun’s day of the week is, obviously, Sunday. Its avatar, Leo, rules the peak of summer, when the download into our bodies is most direct. In The Secrets of Planetary Magic, Christopher Warnock notes that any ritual involving the sun should be aimed towards the “embodiment of health, success and authority.” Intention and invocation with the sun should be motivated towards awakening your immune power and reconnecting you with clarity and divine purpose. The sun is God. So are you.

In his epic pop-mythography project Supergods, Grant Morrison immediately designates Superman as our modern sun god, writing that “everyone suspects the existence of an inner Superman— an angelic, perfect self who personifies only our best moods and deeds.” Morrison’s beloved miniseries All Star Superman literally sends the hero into the sun as he completes his heroic labors. You may feel like a bumbling Clark Kent most of the time, but by accessing the power and placement of your sun, you too can tap into your eternal, all-powerful, superheroic birthright, and face down your greatest villains along the way.