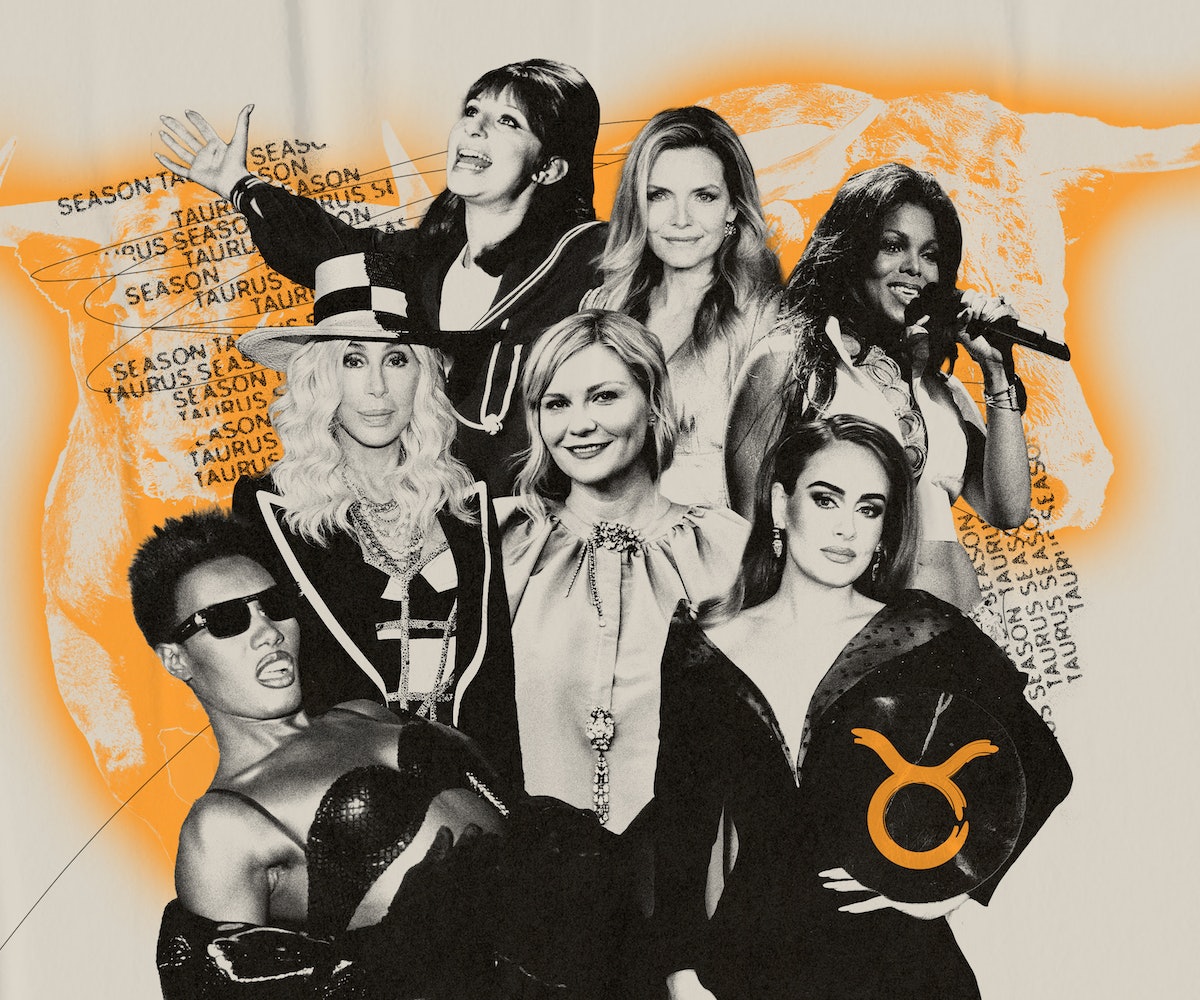 Out of the Piscean womb comes Aries, and with it, the rebirth of spring. Aries brings violence, conquest, and the call to destiny — the stuff kings are made of. But who’s to enjoy the spoils of war, or take repose in the palace, while the emperor marches off again? Who has the grace and the guts to not only command power but enjoy it? Who else but Taurus?

What Aries discovers, Taurus inhabits. “Adam is Aries,” Alan Oken writes, in his Complete Astrology, “the Garden of Eden, Taurus.” Ruled by Mars, Aries is driven by action. Taurus, answering to Venus, is called to embodiment. In the dance of procreation, Aries fulfills the violent masculine work of hunting and fertilizing. Taurus, meanwhile, assumes the part of the grand feminine, languishing in the grass like Kirsten Dunst’s Marie Antoinette, waiting for her fellow Taurus Jamie Dornan to take her in the fields.

Venus was wise in choosing the bull for her avatar. Tilling the earth, bulls brought forth the agricultural revolution, “settling the land that Aries discovers,” as Oken writes. The bull’s horns resemble the fallopian tubes and the crescent moon of the mother goddess. The Taurean liege is a queen above all else, one who not only commands a kingdom but cosmetically embodies its values and ideals. Scorpio brings forth the death principle, the true finality of all things. But Taurus, Scorpio’s polar opposite, is the emissary of the life principle, a generator of sex, desire, vitality, and power. In the words of Grace Jones: “What’s wrong with being a sex machine, darling?”

The great beauties of the Taurus pantheon incarnate this life principle. In Penélope Cruz, Uma Thurman, Christina Hendricks, Ann-Margret, Kehlani, Jessica Lange, and Megan Fox, we witness breathing Aphrodites in full command of their majesty. As Camille Paglia writes in Sexual Personae, “Beauty is power and power is beauty.” The Taurean body answers to a higher authority, a goddess long-worshiped before the scourge of the monotheistic male conqueror, a chthonic force commanding the fertility of the Nile and the fury of the quaking earth.

But can a talent like Taurus really stay satisfied as something to be adored, and nothing more? “Do for me, die for me, lift me, carry me,” Barbra Streisand purrs to Omar Sharif, in Funny Girl. Streisand’s Fanny Brice has just given up her showgirl stardom for the chance at love, matrimony, and wads of cash with her fine-ass Aries man. But could Barbra really just sit and putter? Don’t fall for the act. Like a true bottom, when Taurus is on her back, she’s still calling the shots. Earth signs get off on control, and Taurus was meant to be the boss. “I’m not stubborn,” the cabaret supergoddess Justin Vivian Bond says, onstage. “I’m patient. I’ll wait for you to realize you’re wrong.” When Nora Ephron died, her producer Don Lee turned to Mike Nichols and asked, tearfully: “Who is going to tell us what to do?”

If Aries is a newborn, grabbing at life, Taurus is a toddler, hoarding their toys as a means of self-definition.

As the empress of the zodiac, Taurus lives by godly standards — for herself, her surroundings, and her creative work. This is the diva sign to rule them all, which features Streisand, Grace Jones, Janet Jackson, Cher, Ella Fitzgerald, Adele, Christine Baranski, both Hepburns, and even Liberace. “Do you ever worry about being able to meet your audience’s expectations?”a hanger-on asks Grace Jones, in the documentary Bloodlight and Bami. Her response? “I have much higher expectations than they do.” The performance will be immaculate, and so will the after-party, as evinced by Jones’ tour rider, which calls for champagne, orchids, and oysters. But to ensure perfection, Taurus can be ruthless. Bea Arthur ruled over the Golden Girls set, firing directors on the spot, even though, as an actor and not a producer, she had no such prerogative. Adele canceled her Las Vegas residency because, due to COVID conditions, “it would have been a really half-assed show. I can’t do that.”

For Taurus, mi casa es mi casa, a principle demonstrated in the house of Woodcock in Phantom Thread. “I cannot start my day with a confrontation,” the couturier Reynolds Woodcock wails, in response to his new paramour Alma (Vicky Krieps) eating her danish too loudly. If Aries is a newborn, grabbing at life, Taurus is a toddler, hoarding their toys as a means of self-definition. To share, or compromise, or lose, represents a profound, and, of course, seductive threat to an ego constructed by Apollonian standards. Enter Taurus’ polar opposite, Scorpio, which introduces chaos and codependency, shaking up Taurus’ inclination for total control. Inevitably, Alma regains power by poisoning Reynolds and nursing him back to health. “I want you flat on your back,” she says. “Helpless, tender, open, with only me to help.” To break the indomitable bull from its fixed superiority, a little chaos may be necessary.

Taureans are visionaries, able to project their inborn sense of style and beauty out into the world. The great Taurean directors, among them Jane Campion, Sofia Coppola, Lena Dunham, Lars von Trier, and Wes Anderson, have created entire universes. But when auteurs are left without accountability, they can become tyrants, Pharaohs enslaving the masses for the sake of a perfect ideal. “This is not a democracy, it’s a cheerocracy,” Kirsten Dunst gently reminds her subordinates, in Bring It On. “I’m sorry, but I’m overruling you.” No sign has more rulers in its pantheon than the bull, among them many large-scale engineers of destruction, idealists-turned-fascists who will not compromise their beliefs, even at the cost of millions of lives: Saddam Hussein, Idi Amin, Hosni Mubarak, Pol Pot, Harry Truman, and Adolf Hitler. And don’t forget Mark Zuckerberg, building a digital pyramid that will bury us all.

In the cinematic imagination, the great bull-goddess actresses dramatize the danger of a woman directing her own libido. As the Countess Olenska in The Age of Innocence, Michelle Pfeiffer decimates Gilded Age high society with a red dress and the blush of her cheeks. In Notes on a Scandal, Cate Blanchett plays a walking time-bomb, a beleagured high school teacher who sleeps with her 15-year-old student. “This voice inside me kept saying, ‘Why shouldn’t you be bad? Why shouldn’t you transgress?’” Of course, for the sign of individual agency, the Taurean claim to bodily autonomy will always threaten the matrix, as evinced by the undefeatable Lena Dunham and Janet Jackson.

In unleashing the primal power within, and, more provocatively, wielding it, the Taurus fully inhabits herself. Makeover montages are the province of Scorpio; for the Taurus woman, it’s not a story of metamorphosis so much as of becoming. In Moonstruck, Cher starts out as a cynical, graying widow. But once exposed to the advances of Nicolas Cage, she awakens: Her hair expands, her lips redden, and she arrives into her natural, divine presence. Uma Thurman as the Bride, Mary McDonnell as Laura Roslin, Cate Blanchett as Lady Galadriel: These aren’t Jared Leto gigs, where an actor “transforms” through prosthetics and affectation. The Taurus woman, if given the chance at camp and grandeur, only reveals what she has always been. Michelle Pfeiffer doesn’t play Catwoman in Batman Returns; she unleashes her. “The proportioning of drag is an aggression,” says the drag immortal Charlene Incarnate, in the documentary Wig. “It is a heightened femininity, because femininity is the aggression.” When Charlene takes the stage, she doesn’t get into character; she claims her birthright.

Taureans know what it is to be deemed sacred and profane, to be worshiped on an altar and then locked away in a labyrinth. Ultimately, they must learn not to give a sh*t about what anyone else thinks, and trust their divine taste. As the party wench Patsy Stone on Absolutely Fabulous, Joanna Lumley immortalizes the Taurean point of view: “Whatever I choose is cool because I am cool.” Like Blanchett’s demented high-society hag wandering the streets with smeared mascara in Blue Jasmine, like Cher turning up to the Oscars in her “serious actor dress,” like Lena Dunham filming sex scenes with Patrick Wilson, Taurus refuses to disappear just because her sexuality and power make the rest of us uncomfortable. As Justin Vivian Bond says, “Glamour is resistance.” There will be no comeback for this diva, not when she never backs down in the first place.