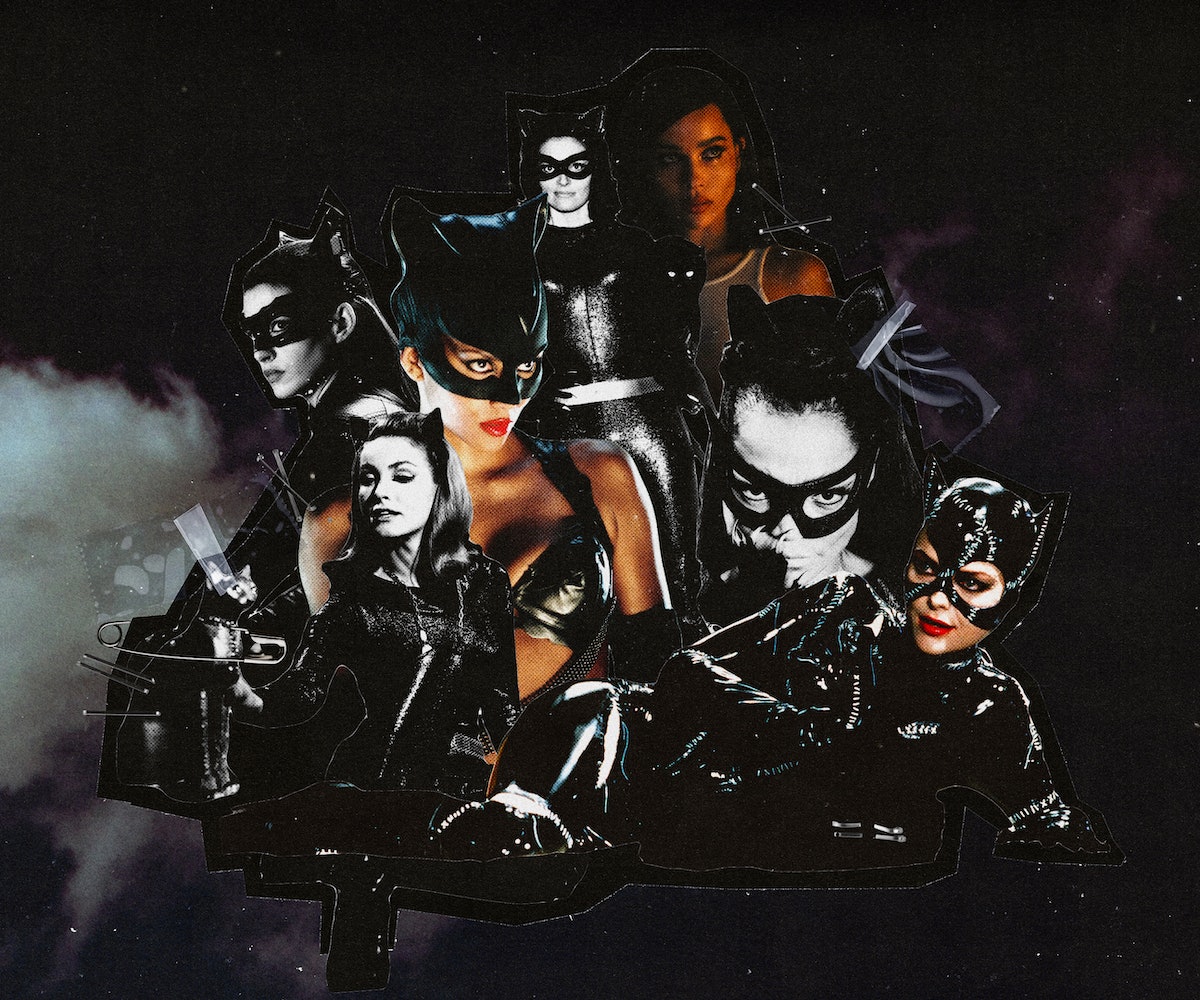 Like the halftime diva at the Superbowl, Catwoman tends to be the main attraction of most Batman movies. Intractable, incorrigible, and ever-alluring, Gotham’s great siren always provides a break from the grim, aggro proceedings. As embodied by seven actresses over 55 years onscreen, Catwoman’s identity has proven mercurial: Is she Eartha Kitt’s white-collar material girl; Michelle Pfeiffer’s goth Lilith; or Zoë Kravitz’s slick cat burglar, as seen in the latest iteration The Batman?

“Cats are autocrats of naked self-interest,” critic Camille Paglia writes in Sexual Personae. “They are both amoral and immoral, consciously breaking rules.” Like her archetypal totem, Catwoman can never be caught, grasped, or controlled. And though her shape shifts from villain to anti-hero, the fundamental rules always apply: Catwoman answers to no man, be it pig or bat. She never hands herself over at the end of the movie. In the realm of superhero cinema, few such femme powerhouses exist, and with such a stacked pantheon of screen legends having claimed her whip, it’s nearly impossible to compare renditions.

The recurring popularity of the feline femme owes to her mythic roots, from the goddess Bast to the black cats of modern superstition, avatars of woman’s demonic sexuality. With such primeval symbology at stake, perhaps Catwoman is best understood through further ancient archetypes — namely, the elements of astrology. Which sign best captures the indelible, elusive seductress? Is she a cardinal sign (Aries, Cancer, Libra, Capricorn), launching her plan for world domination; a fixed sign (Taurus, Leo, Scorpio, Aquarius), luxuriating in repose; or a mutable sign (Gemini, Virgo, Sagittarius, Pisces), changing form to face new threats? And based on your sun sign, who’s your Catwoman?

For the girlies and gay boys of the 1966, no Batman, no President of the United States, no god could compare with Julie Newmar in a catsuit. A true Leo knows that she doesn’t need to do much but share her divine radiance; Newmar didn’t really have to interface with the rest of the cast, or even the plot, to make her mark. This version of Selina Kyle was her own protagonist, making Adam West seem like a very game guest star on his own show. It was Newmar’s idea to strap Catwoman’s golden belt to her hips, rather than her waist, carving an immortal hourglass silhouette, which Anne Hathaway would honor in 2012’s The Dark Knight Rises. Like fellow Leo Kim Cattral on Sex and the City, Newmar was on a show of her own, and had her eyes on her immortal legacy.

She can do accents! Taking over the cat ears from Newmar in the 1966 Batman movie, Meriwether displayed the great adaptive powers of her mutable sign. Gemini doesn’t need a long study to attain command: Throw the girl in a camp spectacular, and watch her instantly master the lexicon. Newmar exuded Leonine theatricality to its fullest, starring in her own vehicle, not fully interacting with the rest of the show. Meriwether, meanwhile, was able to channel Gemini’s relational talents to match and foil the reigning bat Adam West (himself a Virgo, a fellow mutable sign).

For Capricorn, it’s all about the money. Eartha Kitt could barely bother to fuss with Adam West — not when an infinitude of jewels, furs, and treasures called her name. With her henchmen Manx and Angora at her side, Kitt threatened all of Gotham from her lair of gaudy purchases, a Capricorn taking the city for all it’s worth. It’s the imperative for the goat, and all cardinal signs, to drive the plot, and Kitt didn’t waste time. All Newmar had to do was purr to claim her stage; Kitt, meanwhile, came here to start sh*t up, bursting onto the scene, breaking into vaults, and stealing the show along the way. Kitt’s Catwoman always had a plan — and you could count on her to talk about it all night.

Michael Keaton would be the second Virgo Batman in a row, after Adam West, a mutable caped crusader who could perfectly sub for his Cat companion. He gets the assignment: Taurus is the sign of ownership, and from Michelle Pfeiffer’s first demented entrance as a gaslit Selina Kyle, Batman Returns becomes Catwoman Begins. This earth sign pairing proves to be the most viscerally sexy of them all; you can feel every scratch in the rubber as the two pounce on each other. Taurus is ruled by Venus, the evening and morning star, and as Pfeiffer breaks down, she lights up every aspect of the archetype: gliding down the stairs of the masquerade as Aphrodite incarnate and crowning herself queen of hell, a gothic Persephone who can never die. Taurus doesn’t care for competition. Good luck trying to top this one.

Like Newmar before her, Halle Berry benefits from Leo’s myopic worldview: so concerned is she with her performance that she may not notice the movie caving in around her. Catwoman is one of the great unmitigated disasters in all of history (and arguably a camp masterpiece), but Berry seems largely unfazed. After immortalizing her B.A.P.S wardrobe and a 007 bathing suit, she knew her assignment was as much sartorial and dramatic — not just anybody could pull off this look. A true Leo pro, Berry hits her marks, serving whip and stiletto with ease while the rest of the green-screen sh*tshow goes down. And like the Leo Mae West, eating up the spotlight at her own obscenity trial, Berry rode the Catwoman disaster all the way to the Razzies, proudly claiming her Worst Actress statue. If Leo is in, she’s in all the way!

Where Pfeiffer’s Catwoman descends into the underworld, Hathaway’s Selina Kyle rises from it; a lowly cat burglar who sees Gotham’s fall coming from a mile away. “There’s a storm coming,” she purrs into Christian Bale’s ears, reminding the self-righteous Aquarius of the pain and fear he’s blind to from his tower of lofty ideals. Scorpio is the truth-teller, the snake in the garden of Eden, the messenger at the gates of the apocalypse. Hathaway’s Kyle is torn between two worlds: Batman’s police state and Bane’s libertarian kangaroo court. While Batman indulges in high-stakes sacrifices for the soul of America (or whatever), Hathaway’s Selina must choose her place on the ground, and in doing so, come to her higher calling. Leave it to Scorpio to purr life back into a sexless trilogy.

Sagittarius: Zoë Kravitz in The Batman (2022)

The Sagittarius style icon matches well with Taurus men: from the vantage of Page Six, Kravitz and Channing Tatum balance out the bull’s practicality and the centaur’s daring. Meanwhile in Gotham, Kravitz’s Selina Kyle dances in perfect step with Robert Pattinson’s moody, broody bull-headed Brucey. Taurus demands total control, making Kravitz’s cat a perfect foil for this bat: Every time he has her in grasp, she goes rogue, diving off rooftops and into chaos. And yet, Taurean practicality can be an essential counter to Sagittarius’s half-cocked plans; and this Batman checks Kravitz’s cat from flying too far off the handle. True to the breed, Kravitz’s Catwoman benefits from Sagittarius’s mutability, shifting through states of languor, aggression, seduction, and benevolence, with one constant for all centaurs: she never stops in place, and she’s always on the move.