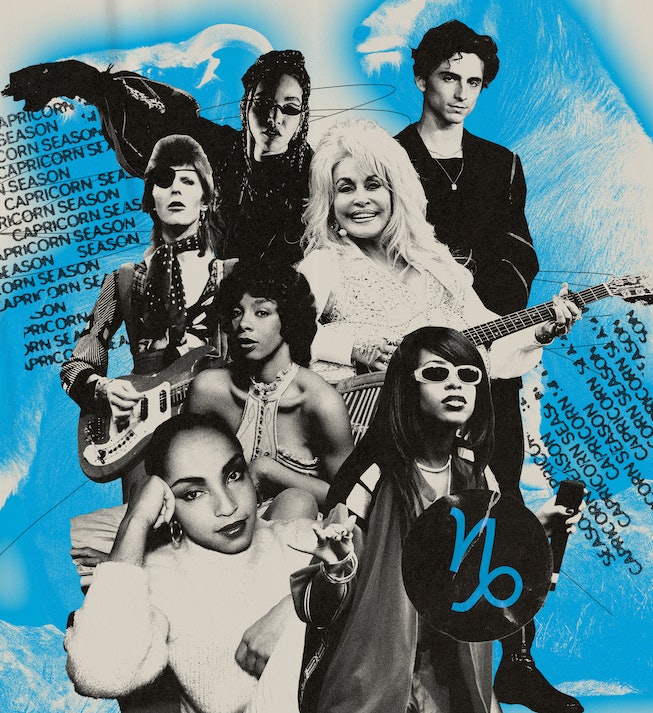 Winter has come at last, promising bitter, bracing devastation. This is not a time for imagination, but for bare survival, grit, and stamina. Sagittarius season brought you face to face with Mother Ayahuasca; now comes the rule of Father Time. Only the strong will survive, which means that, like it or not, the Capricorns are here to stay.

The winter signs of astrology think in collective terms — if we’re to get through the brutal cold (or, in the southern hemisphere, the vicious wildfires), we’ll have to band together. Aquarius and Pisces seek to build a better world, where we’re all socially and spiritually connected. But while the children of the future envision a new paradigm, someone’s got to put food on the table. Capricorn is eager to play breadwinner and girlboss, securing and safeguarding power. But with great power comes great responsibility. Will yours be used for the common good, or consolidated, hoarded, and wielded for terror? Will you choose the path of Martin Luther King, Jr., or ride to space on a giant phallus with Jeff Bezos?

Few understand this conflict better than Paul Atreides, the hero of Dune, as portrayed by the Capricorn Timothée Chalamet, blasting through the messiah-to-tyrant pipeline with élan. Only Chalamet, dripping in imperial elegance and cosmic allure, could embody the beloved dominator of the universe. Cast away on the Planet Arrakis, a Capricornian desert hellscape, the luminous chosen one has a chance to prove his mettle. If he can endure here, he can rule anywhere.

And make no mistake: With this sign, world domination is at stake, one way or another. If you’re not on top, then you’re a loser. Capricorns need to be behind the wheel, whether they’re running a fascist regime or booking the Fire Island timeshare. Capricorn’s ruler is Saturn, who, in Greek mythology, so feared that his children would topple him, that he devoured them alive. Of course, the prophecy would come true, with Zeus and the Olympians defeating their father. Saturn, in astrology, represents age, time, authority, and the institutions which rule over us. Crushed under its weight, Capricorn is locked in a lifelong, internalized Succession: Destroy your father, claim your power, and become the Man, or avoid responsibility, and the possibility of ever realizing your own potential.

At least Capricorn embraces power outright, like its icons Tiffany Pollard and Dame Shirley Bassey, never feigning meekness. You think Yzma herself, Earth Kitt, is going to compromise for anyone? Asked on a late night show about the meaning of her name, Aaliyah swifty responded: “It means the highest, the most exalted one. The best.” Capricorns envision their reigns to span seasons and ages, recruiting their skills for survival to play a long game, hence the enduring and epochal legacies of David Bowie, Donna Summer, and Betty White. Leos may measure success in validation, and Sagittarians in stimulation, but when you’re charting a career over decades and lifetimes, you don’t need instant gratification. Dolly Parton and Ricky Martin don’t care that you’ve written them off as old-fashioned and kitschy; they know you’ll come around eventually, and, even if you don’t, they’ll just outlive you anyway.

Those Capricorns who don’t embrace authority will romanticize their place under its boot. Beware the twee Capricorn, taking cues from their mascot Zooey Deschanel, playing the role of an adorable misfit: deep within, they’re seething, ready to blow like Carrie White on prom night (as immortalized by Capricorn Sissy Spacek). When absolute power is at stake, every relationship is hierarchical. “Some of them want to use you,” bellowed the Capricorn Annie Lennox, “some of them want to get used by you.” For a relationship to be equitable, those with heavy Capricorn placements must be given freedom to assert their ambitions. “I am too intelligent, too demanding, and too resourceful for anyone to be able to take charge of me entirely,” Simone de Beauvoir said, “No one knows me or loves me completely.” Parton has largely kept her husband out of the public eye, ensuring a balance of her public and private lives, and over fifty years of matrimonial stability.

This isn’t to say that Capricorns must be made of steel. The five-season trajectory of Insecure has followed its creator Issa Rae, and its protagonist, Issa Dee, from outsider status to moguldom. For Capricorns, the struggle, and the striving, are often more rewarding than the actual reward. Embodying Capricorn’s masculine rigor, its divas claim a warrior femininity, cracking open the molten heart under the tectonic shell. “Womanhood was a difficult thing to get a grip on in those hills,” Parton said of her upbringing in the Smoky Mountains of Tennessee, “unless you were a man.” FKA Twigs, nicknamed for the loud cracking of her bones, rides the dissonance between angelic vocals, longing lyrics, and hard, muscular choreography. Like her fellow winter majesty Lennox, Twigs adorns herself in beauty as armor, a wardrobe designed for regality over desirability, and mastery through subtlety. For Capricorns like Parton and David Bowie, gender and sexuality are but further toys for play, weapons to sharpen.

The complex reckoning of femininity with strength is best lived through the battles of the canonical Capricorn and titular star of Buffy the Vampire Slayer. Imbued at age 16 with superhuman strength, Buffy goes from teenage girl to force of nature, a necessary good required to beat back the ever-impending forces of darkness. To embrace her calling, Buffy must cast away the dreams of a suburban mall blonde, and realize that she’s above other mortals. Buffy’s foil, the bad-girl Slayer Faith (immortalized in platform boots by the Capricorn Eliza Dushku), has no problem with total supremacy, regardless of the consequences.

“You’re not seeing the big picture, B. Something made us different,” says Faith. “We’re warriors. We’re built to kill.”

“To kill demons,” answers Buffy. “It does not mean that we get to pass judgment on people like we’re better than everybody else!”

Faith disagrees: “We are better!”

By the end of the saga, both women cast aside their egocentric delusions — Buffy’s cravings for a “normal” life and Faith’s toxic individualism — and work together to share their power with generations of young women to come. Beyond the fight to survive, Capricorn is called to make something bigger, far beyond itself, with the strength to last forever. “Make your choice,” Buffy says to her new army of Slayers, “are you ready to be strong?”

“White supremacy is going to fall,” Indya Moore said, glamorously, in what should have been a banal red carpet interview. “And, we’re gonna decolonize…everything.” Moore, like fellow Capricorn Jamie Clayton, made history as a trans woman leading a TV series. Parton created Dollywood, bringing employment and pride to a depressed region of the country. De Beauvoir published The Second Sex in 1949, and no amount of gaslighting has undone its impact. Greta Thunberg will shame the systems of power until they surrender. You know you’ve got it, too, something special that needs to be launched into the world. If you weren’t so obsessed with being a loser, a loner or a malcontent of a broken bureaucracy, what would you do? What would you build to last?

This article was originally published on Dec. 21, 2021