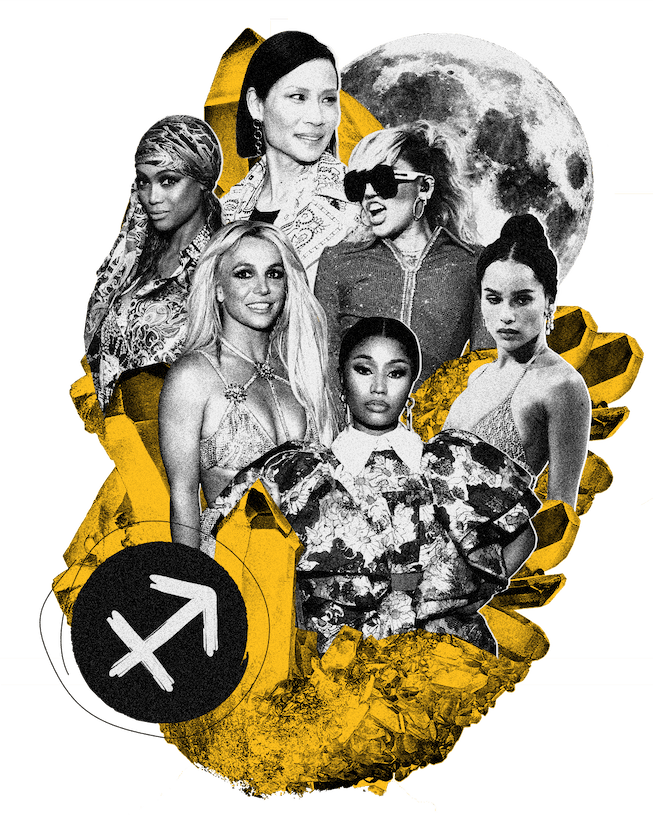 The tab of acid drops with Scorpio. In that first, bracing ego release, you face the outdated shell which must be discarded for a new life. After the fire, and the tears, and the realization of how you’ve held back your power, you’re ready to go global; now you’ve got ideas, and in this manic spree, there’s no holding back. Are you ready to change the world? Certainly. Are you a little tweaked out? Definitely. Welcome to Sagittarius season.

Scorpio forces a reckoning in the domain of relationships. How do the ones you love change you? As you join your beloved under the chuppah, or inherit your dead parent’s estate, your childhood is officially over. Now you must claim a new position, and confront the power dynamics in your way. When that battle is done, Sagittarius rings in your new freedom. You’ve left your childhood bedroom, or the drab relationship that’s held you down for years. Now comes the college years, and with them, the desire to learn, explore, and get freaky with people you’ll never see again.

Sagittarius marks the final sign of autumn. Winter is indeed coming, which Capricorn will remind us of ad nauseam, but before you have to give into the grind, Sagittarius lets you kick back in your dorm room, smoke a joint, and dream big. If Capricorn is the Girlboss, Sagittarius is the Cliff Girl at the youth hostel in Amsterdam, deciding who she wants to be. “I’m like a bird,” the Sagittarius Nelly Furtado declared, forever and all time. “I don’t know where my home is, I don’t know where my soul is.” Signified by the galloping centaur, Sagittarius aims its arrow ever forward, like Lucy Liu firing her bow in Charlie’s Angels. This one’s for the teddy bear. A new year is coming. Why not believe anything is possible?

If you are going to aim high, nothing must stand in your way. “I don’t need nobody telling me just what I want to do about my destiny,” Britney Spears exclaimed, immortal. Wherever Sagittarius occurs in your chart, it demands expansion without limits. Inertia is anathema to the Sagittarian conquest: The frontier of new lovers, new ideas, and new futures must be infinite. Give Julie Delpy a romantic encounter with a stranger in Before Sunrise, or Jennifer Connelly a quest into the Goblin City in Labyrinth, and they won’t blink twice. But ask a Sagittarius for a vow of monogamy, and they’ll shudder in fear. That’s not to say that the centaur is destined to be alone, rather that they have to live and love on their own terms. If the new Batman, as played by the Taurus Robert Pattinson, wants to get with the Sagittarius Zoe Kravitz’s Catwoman, he’ll have to keep up, and learn to break his own rules.

“If Capricorn is the Girlboss, Sagittarius is the Cliff Girl at the youth hostel in Amsterdam, deciding who she wants to be.”

With Nicki Minaj, Tina Turner, Britney Spears, Christina Aguilera, and Bette Midler in its pantheon, Sagittarius may be the definitive diva sign — with Taurus at a close second. Perhaps these legends came to answer the prayers of exhausted record executives, so bored of building images, brands, and personalities for braindead Disney Channel stars. When Nicki busts through the door, her plans for world domination well under way, all you have to do is sign the check. Anything is possible in the creative imagination of a Sagittarius, and, even if it guarantees a crash in flames, flying too close to the sun is always worth it.

With no concern for practicality, propriety or even good taste, Sagittarius can go all the way. Too jacked up for subtlety, they hit the mark on the head, making themselves even bigger targets in the process. Upon release, the videos for Britney’s “Hit Me Baby One More Time,” Christina’s “Dirrty,” Miley’s “Wrecking Ball,” and Nicki’s “Anaconda” were so void of tact as to be immediately outrageous, inflammatory, and, ultimately, iconic. If Sagittarius isn’t pushing or provocating, it’s stagnating, and that’s never an option. Try to moralize Miley, and she’ll slide down a 30-foot replica of her own tongue. Make Anna Nicole Smith into a lesson, and she’ll make herself into a reality show star. Try to cancel them, and you’ll only make them stronger.

Eager to blow up every assumption of our so-called civilization, Sagittarius takes a big swing with every single action. The political is always personal for this sign, with the highest of ideals at stake in every decision. A fire sign engaged with the biggest picture possible, Sagittarius can combine Aries’ warrior drive with Leo’s regality, and make individual stands into crucibles for social change. When threatened by misogynist, corporatist abuse from their record labels, JoJo, and later Taylor Swift, would re-record their earlier albums to reclaim ownership and agency. Sinead O’Connor obliterated a future of mass popularity when she ripped up a picture of Pope John Paul II on Saturday Night Live, in defiance of the Church’s long history of child abuse. And as for Jane Fonda...where to begin?

However, unable to stand still in one place for long, the Sagittarian warrior struggles to gain perspective from their actions, or to understand consequences. This is a spirit of propulsion and possibility, not accountability. You want Nicki to escalate the stunts, to go where no one has gone before. You don’t want her advice about the long-term anatomical effects of vaccination. Let Alyssa Milano blow the door open, then bring in someone else to handle the discourse.

Assign Sagittarius a mission, a fight worth fighting for, and they’ll be your greatest captain, Winston Churchill fighting for freedom. But let them win, give them too much power, and you’re stuck with Joseph Stalin — or Tyra Banks. Building her demented playhouse in the adolescent mania of early reality TV, Tyra inflicted countless traumas on the wards of America’s Next Top Model. At its highest vibration, Sagittarius, and its ruling planet Jupiter, synthesizes lived experience into wisdom. But without context or perspective, that experience is warped into the juvenile idealism of a college student at a protest. Do you really want Tyra teaching you a lesson?

The brave weren’t meant to govern, but to lead, and go down glorious. Leave the accounting to the cowards, and the Capricorns. Sagittarius may come off as messy, volatile, and doomed to crash hard, but that’s because few of us have the guts to leap into the unknown. “I’m a girl from a cotton field,” Tina Turner said, “who pulled myself above what was taught to me.” To slam it on the stage with the power, precision, and magnitude of Britney and Tina, you have to leave the old world, and the little people who occupy it, far behind. For both women, those little people proved to be the most dangerous.

But once you’ve crossed over, once you’ve chosen an incandescent life, there’s no going back. For Sagittarius, eternal life awaits in the future, and their captors, inevitably, must fall behind in the past. No matter what you’ve been through, or where you’ve come from, Sagittarius has only one question: What’s next?

NEXT UP
Astrology
February 2023’s Full Snow Moon in Leo Embraces The Real You
Astrology
How to Use Astrology to Access Past Lives
Astrology
Your February 2023 Horoscope Is A Breath Of Fresh Air
Culture
The Cutest Couples At The 2023 Grammys
Style + Culture, delivered straight to your inbox.

This article was originally published on November 18, 2021