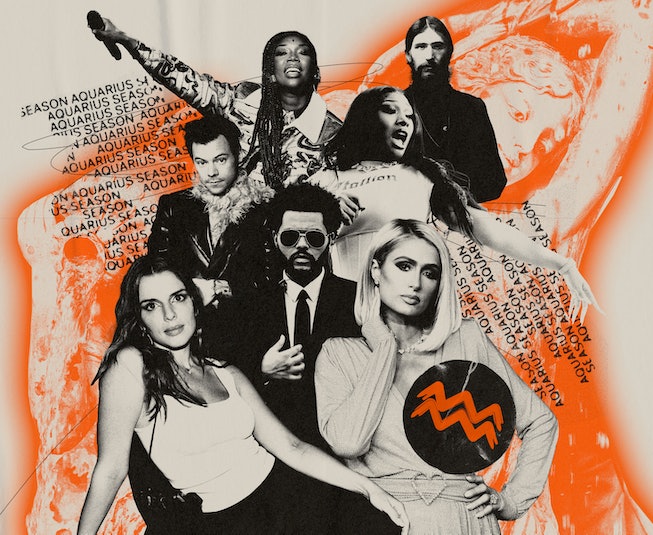 “Something’s crossed over in me,” Thelma says, to her best friend Louise. Days ago, she was a repressed diner waitress, terrorized into passivity by her loser husband. Now, she’s an outlaw on the road, eviscerating abusers, robbing convenience stores and f*cking Brad Pitt in motel rooms. “I can’t go back. I just couldn’t live.” As played by the amazon and Aquarius Geena Davis, Thelma has awakened to a frightening and dazzling open road, beyond the rules and limits of the patriarchy. But to leave her own world behind, Thelma will have to drive off a cliff, out of the grasp of the law, and into the unknown. “Let’s not get caught,” she tells her fellow air sign Susan Sarandon. “Let’s keep drivin’. The call of Aquarius has finally been answered. Only the future remains in sight.

Firing out of Capricorn country, a rigid surveillance state based on survival and capital, Aquarius careens into the nirvana of Pisces, where all limits are subsumed by the collective oneness. Hold on there, slick. If humanity is going to leap from Pontius Pilate to Jesus Christ, from the T-800 to the T-1000, we’ll need a plan. If Pisces promises a flood of consciousness, then the water-bearer must construct the levees. Aquarius must wield the technology to deliver the future with the personal detachment to handle its radioactive contents.

Aquarius, like Capricorn, is traditionally ruled by Saturn, the planet of structure and order, thought to be the last heavenly body in our solar system. But the 1781 discovery of Uranus blasted open the known limits of the cosmos. Uranus would come to symbolize change and revolution, sharing the rulership of Aquarius. The final air sign then serves both masters — tradition and upheaval — as it works towards the practical, structural implementation of change. Its gaze is fixed through the looking glass and into the future, interfacing with new mediums and movements that will speed us to the event horizon.

“I wanted to create a prophet,” the cinematic visionary and Tarot master Alejandro Jodorowsky said, in the documentary Jodorowsky’s Dune. In the 70s, Jodorowsky assembled a team of artists to create “something sacred, free…to change the public’s perceptions,” an adaptation of Dune that would feature Salvador Dali, Mick Jagger and the music of Pink Floyd, “and change the young minds of all the world.” Inevitably, the conservative minds of Hollywood fired down his masterpiece before it could be brought to fruition. But for Aquarius, the purity of ideation is of greater value than the necessities of the present.

Like Brandy, experimenting with her genre years before the next generation would pick up her work, Jodorowsky wanted to leave a drop in the ocean, and let it reverberate into the future. His team of “spiritual warriors” would include fellow Aquarius H.R. Giger, and would go on to win an Oscar for crafting the indelible Freudian nightmare of Alien, the dripping depths of which come from Jodorowsky’s imaginings of Geidi Prime, the Harkonnen homeworld. “From this supposed failure,” Jodorowsky says, “came a lot of creation!” Aquarius doesn’t want your validation. It wants to build a spaceship.

Jodorowsky’s inability to compromise would be considered a triumph among his water-bearing peers, to whom the pursuit of the highest ideals is all that matters. Air signs are disinterested in the politics of morality, and Aquarius especially will not be won over by sentiments of love or guilt. Aquarius needs a revolution, an ethos to serve. Oprah, Ellen, and — God help us — Sarah Palin, all vibrate at their highest frequency as the outlier who came up. But once they’ve leaned into their comfy couches in hell, the mavericks lose the mission. How does the outsider know when they’ve become an overlord? How do you break it to Elizabeth Holmes and Ronald Reagan that they’re not necessarily part of the solution?

Aquarius shouldn’t play into the all-too-human traps of ego-indulgence. They’re best served working subtly, f*cking up the power hierarchy in bizarre and original ways. Was the joke of The Simple Life on Paris Hilton, or was she laughing at George Bush’s “real America” all along? Keep accusing Yoko Ono of dissolving The Beatles, while she uses the Lennon estate to support Alice Walker and the anti-fracking movement. Mozart, Rosa Parks, and Virginia Woolf didn’t come here to make friends.

Aquarius is here to f*ck the power, which is often best achieved by literally f*cking the power. “They didn’t quit, they wanted his head,” Boney M. sings of Grigori Rasputin, the self-proclaimed holy man and sex symbol who came to covertly control Russia. Like Rasputin partying with the Czarina, and Zsa Zsa Gabor riding high with Conrad Hilton, Julia Fox indulges at Kanye’s side, checking her makeup while we write think-pieces. Hilton, Ono, and Fox trigger in the masses the same rage which led to Rasputin’s infamous death: by taking selfies at the peak of the pyramid, they make you realize the artifice of its height, and how far down you are from the top.

Like Rasputin partying with the Czarina, and Zsa Zsa Gabor riding high with Conrad Hilton, Julia Fox indulges at Kanye’s side, checking her makeup while we write think-pieces.

Aquarius knows that in the future, we’ll all be equals, essential parts of the same world clique. This inability to adhere to the accepted principles of the day is essential to Aquarius. But life and relationships inevitably require compromise, which can’t always be answered with Ayn Rand quotes and academic theory. This reckoning between the ideal and the real plays out every time Saturn returns to Aquarius, otherwise known as the Culture Wars: the explosive early ’60s, the “porn wars” of the early ’90s, and the current battlefield over cancellation and so-called personal “freedom.” Aquarian eras hash out the messiness of collective shifts in consciousness. How do we relate to each other in a new global paradigm? What are the rules of engagement in a digital polis? How far can we go into the future without losing a grip on the present?

Having to be in the moment repulses Aquarians; they’d rather compose sonatas in their infinite dreamscapes than talk about your feelings. Christina Ricci honors her sign in her immortal portrayal of Wednesday Addams, the proud deviant who sets fire to the summer camp. “I’m not in a bad mood,” she deadpans, “this is just me.” But for all the ways Wednesday couldn’t care less about fitting in, Ricci’s Misty Quigley, on YellowJackets, reveals the water-bearer’s inverse desire to so desperately be of use to the group. When Misty leads, her vision keeps the team alive. But her attempts to connect veer off the rails very fast, often into Misery territory.

Wednesday Addams would likely find a peer in The Weeknd, the dark prince of pop, ever crooning through dungeons of despair and dissociation. “If it hurts to breathe, open a window,” he yelps, “your mind wants to leave but you can’t go.” Like Lewis Carroll thrown too far into his Wonderland, Aquarius can get lost in orbit, far away from the rich solar embodiment of its polar opposite, Leo. The ubiquity of Twitter, ketamine, and hyperpop speaks to the addled desires of an Aquarian generation at their Saturn Return: What does it take to feel when everything has been broken, deconstructed, and rendered ironic? How do you come back to earth?

But if Aquarius can download out of the simulation and back into their bodies, then the vision can be real. Even the most benign jiggle of Megan Thee Stallion’s thigh mid-twerk will ripple through the sexual imagination, just as her ostensibly silly “Hot Girl Summer” has pollenated infinite playlists, mood boards, and marketing plans in every corner of the land. While the masses toast to Megan’s zeitgeist-altering turns-of-phrase, she’s already moved on. After graduating with a bachelor’s degree in health administration last December, the rapper declared: “I’m gonna open an assisted living facility and use the money that I make from rapping to open it. Then I’m gonna let my classmates run it.”

Why not? Aquarius hot boy Paul Newman’s salad dressings have subverted the corporatist profit model straight out of the grocery store, with all post-tax profits raising over $570 million for charity to date. Davis, awakened by the feminist promise of Thelma & Louise, and disappointed by the misogynist industry that received it, opened a research institute on gender in media in her own name. FDR gave us the new deal. When money, class, and hierarchy have been demolished, the last currency for trade will be originality. Aquarius is already there, in the mutant nation where everyone’s a hot freak from the not-so-distant future. Are you ready to log in?