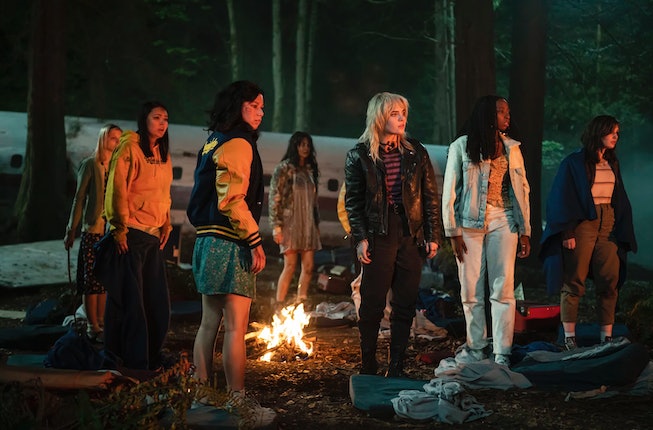 Which girl would you be? That’s the essential question, and addicting allure of Yellowjackets, Showtime’s surprise hit of 2022. It’s 1996, and a New Jersey high school soccer team flies to the national championships. When the plane crashes, the surviving teenagers must fend for themselves in the Canadian Rockies. As the show flashes forward to present day, where a scant few of the original team remain alive, it becomes clear that not everybody is going to make it out of the woods alive…and that quite a few of the cast are on the menu for dinner.

The best episodes of Yellowjackets force the teen girls to make choices — about surviving, escaping, and leading. As we encounter the survivors in the years before and after the crash, we must reckon with the show’s core truth: Trauma doesn’t change who you are, it just brings out who you always were. As the soccer team fights for their lives, their root characteristics emerge, defining each character’s odds of enduring and dealing. And what better way of understanding one’s core attributes than through astrology? To determine how you’d really cope in the wilderness, we’ve matched the teammates to their signs. Who’s your player, and how do you think she’ll fare?

Tawny’s shady private investigator displays all the essentials for an Aries: ruthless determination, a drive to succeed at any cost, and the ability to outlive and outlast any competitor. While the Yellowjackets could at least count on one another to survive, Jessica must rely on her own wit and cunning to endure imprisonment in Misty’s Misery roach motel. Aries never gives up and never compromises, even in the face of a delusional psychopath. This ought to end well.

Shauna’s Scorpionic suspicions of Adam inevitably turn out to be misplaced. Sometimes, a hot idiot is just a hot idiot. Enjoy the ride! Repping the sign of fertility and luxury, as ruled by the goddess of love Venus, Adam joins a litany of moderately useful but extremely hot Taurean men, including Henry Cavill, Channing Tatum, Jamie Dornan, Richard Madden, and Noah Centineo. In a kinky twist of roles, the Taurus “artist,” exhibiting a devil-may-care attitude rare for his sign, would fall for a Scorpio “housewife,” playing the role of subdued and repressed. Sparks fly as chaos ensues, and Adam fulfills Shauna’s fantasy of escape. Don’t hitch your ride on a pretty face.

It’s not that Gemini doesn’t mean well. It’s just that, with such an immediate frame of reference, they tend to act on impulse, and by the time consequences wash up, they’ve already moved onto the next project. Misty usually has good intentions, or at least a heart full of love, and benefits from Gemini’s versatile toolbox of skills (she’s practically a one-woman hospital staff). But with no moral underpinning to her actions, this “poodle-haired bitch” can’t understand the harm she’s doing. When will the most trigger-happy of signs learn that just because you see a boner, doesn’t mean you have to grab it.

No matter how hard the front, the zodiac’s most sensitive sign always gives in when love is on the line. Natalie may embrace the lone wolf persona, but she’s a fool for love, and can’t help but want to nurture those around her. Though the other survivors may act like they’ve moved on (except Misty), Natalie can’t drown out her heart, hunting down old diaries and reliving every heartbreak. In the role of hunter, she honors the sign of nourishment, helping keep her friends alive. But without any support in return, she falls apart. But there’s a reason Cancers are so tenacious; they’re gripping onto who matters most. Natalie won’t be going down without a fight.

When the king of the zodiac channels their natural grace and regality to inspire others, anything is possible. As team captain, Jackie helps bring this ragtag group together, and, in the initial weeks in the wilderness, puts her leadership skills to use just to keep everyone going. But Leo, ever-myopic, refuses to be outshone, and as Jackie becomes redundant in the new social order, her craving for attention endangers her authority. How many people will she take down with her before it's over?

When you’re the lone viable mate for a coven of bacchantes-in-training, you better play things close to the chest. At the start of the saga, Travis embraces Virgo’s calling, to draw boundaries and keep himself safe from the emotional compromises relationships demand. When that hard armor, so necessary to the sign, falls just a little, it’s open season, and Travis becomes a commodity worth killing for. The archetypal virgin retains selfhood, never compromising what is his, no matter the financial, sexual, and social demands of the day. Budge one inch and indulge Jackie’s mind games, and you’re on a fast track to being the main course at the weenie roast.

Jackie can’t have everything. In the first days of the crash, Van acts as a counter to the team leader, challenging the assumed power dynamics of the group. But as Van gets closer to Tai, she cedes independence and gains unconditional love, direction and (albeit crappy) protection. Libra knows it can’t get anywhere without people, and while Jackie languishes in her self-imposed suffering, Van learns that compromise, Libra’s greatest art, can pay off. By pledging allegiance to her lover, Van earns eternal loyalty, and a mate who doesn’t wince at her wolf-gnarled visage. That’s commitment.

On an otherwise banal night of teen revelry, the ostensibly meek Shauna convinces her best friend’s boyfriend to pull over, have sex with her, and tell her he loves her, even if he doesn’t mean it. “If you come inside me, I will raise the baby out of spite and train it to become a killing machine that eventually hunts you down.” This level of intensity can only belong to a Scorpio, the sign fixated on death, sex, and metamorphosis. Nothing is chill for these people. Shauna may play the role of aloof housewife, but show her a garden rabbit, and it’s time to kill. All Scorpios must learn the hard way: you’re going to have to seize power eventually. Why play it small?

Shoot for the stars, girl! It’ll probably all work out! Count on that signature Sagittarian courage, stupidity, and sheer chutzpah to venture into the unknown, fly into the horizon, and to crash in flames. With an arrow pointed ever forward, the Sagittarian imperative is to launch, no matter how close you fly to the sun. Do Sinead O’Connor, Miley Cyrus, or Nicki Minaj know where they’re headed? Hell no! Laura Lee’s sense of higher faith helps her get through the early chapters of the wilderness saga. Though it leads her to die in a burst of flames, it may have spared her from worse suffering still to come.

No one dares question Taissa’s ruthless ambition, from the soccer field to the Senate chambers. And despite her creepy connection to spirits and ghouls, Taissa always keeps her eyes on the real, tangible, and winnable. Enter Capricorn, the ultimate survivor, armed with the grit and stamina to make it through the coldest of winters. Leave it to Tai to walk away from a wolf pack with all her limbs intact. Perhaps some flexibility (and a little leeway to Lottie’s visions) would help Tai deal, but what Capricorn wants to break course or show weakness? Forget Jackie; this girl knows how to make it through!

Aquarius steps away from the rest of humanity to view things in a zoomed-out lens. They’re not here for interpersonal drama, instead honing their view on the far future. This is the queer sign, the revolutionary, the outsider who sees the world differently. Poor Coach Ben. All manner of contributing factors — his age, his orientation, his sudden disability — have set him apart from the rest of the tribe. He has the perspective and experience to know how things are going to go down. But will anybody ever listen? The Capricorns will make their plans and seize control. At least Aquarians don’t mind being alone. And if you want to get them to open up, just sneak shrooms into their soup.

Just when you get used to one fish swimming downwards, that uphill climber crawls in for an ambush. Lottie’s profound psychic sensitivity suits the sign of borderless empathic consciousness and spiritual channeling. But it’s her instant switch, from basketcase to cannibal queen, that seals her fate among the two-sided fish. Whatever she’s feeling next week, just be sure to stay out of her way.

NEXT UP
Culture
Phoebe Dynevor Will Not Return for Bridgerton Season 3
Culture
Succession Season 4 Trailer Explodes With Family Drama
Astrology
February 2023’s Full Snow Moon in Leo Embraces The Real You
Astrology
How to Use Astrology to Access Past Lives
Style + Culture, delivered straight to your inbox.