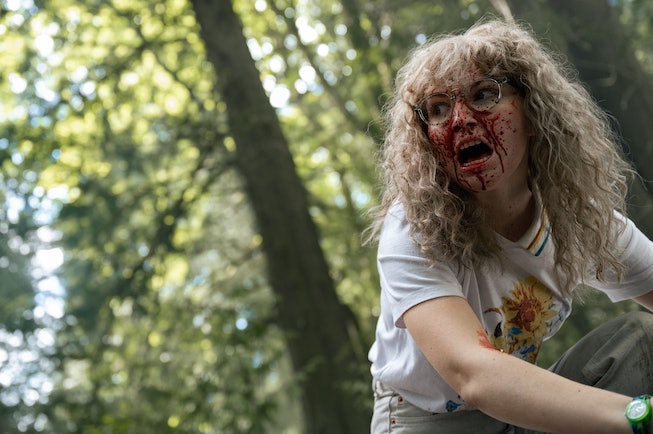 Warning: Mild spoilers for the first eight episodes of Yellowjackets ahead.

Since its debut in mid-November of last year, Showtime drama Yellowjackets (one of my Top 10 TV Shows of 2021) has gone from “that series a few critics can’t stop raving about on Twitter” to a bona fide word-of-mouth sensation, steadily building its audience with each new episode. (Referring to it as a “hotshot out of a cannon,” Showtime’s President of Entertainment noted that the series had “grown each week on streaming by double-digit percentages.”) After a year where two of television’s biggest water-cooler hits both aired on HBO (the Hawaiian-set summer catnip of The White Lotus; the continued excellence of pitch-black comedy Succession), it’s been refreshing to see one of the underdog networks take up some of the market share.

But how does a show featuring, amongst other things, human faces being ripped to shreds by starving wolves, fugued-out senator candidates devouring dirt in the middle of the night, and eventually, some form of cannibalism (possibly of the newborn variety) become such a hit?

Created by married duo Ashley Lyle and Bart Nickerson, Yellowjackets is a story told on two timelines. In the first, set in 1996, we have the show’s namesake: a talented New Jersey high school varsity soccer team who, while on a private plane traveling to their nationals tournament, crash and land in the barren wilderness of Canada; for the next 19 months, they’ll have to fight to survive before finally being rescued. The second timeline, set 25 years later in our present day, picks up with the surviving members of the squad, following them in their hapless attempts to adjust to life in the civilized world. The split timeline proves to be an ideal framing device, allowing for compelling exploration of the ever-changing dynamics of female friendship and the metastasizing burden of trauma and grief — especially when you can never be honest about it.

The casting is also a marvel. Not only has the series blessed us with fascinatingly unpredictable roles for beloved actresses like Christina Ricci, Juliette Lewis, and Melanie Lynskey, but it’s also found eerily perfect matches for their teenage counterparts. Sophie Thatcher taps into her inner-Ursula to somehow steal Lewis’ voice, while, in another project, Sophie Nélisse could have easily played Lynskey’s daughter. Ditto Jasmin Savoy Brown and Tawny Cypress, who both play Taissa, the aforementioned senator candidate, as a wound-up ball of ruthless determination. It’s unsettling how much mileage both actresses get out of a simple glare.

The pilot, directed by cult auteur Karyn Kusama, deserves all the credit for setting everything into motion, capturing some of the same female menace that made her Jennifer’s Body such an underrated feminist classic. Its brief flashes of terror — an unidentified girl running through snow-covered woods until she falls into a manmade booby-trap, impaling herself on a series of stakes; a bloodied corpse being dragged through the wilderness, hung up by its feet, and then drained of its blood after someone slits its throat — teased enough to sustain viewers’ interests in the show’s central mystery (how did these girls survive for so long?) for the last two months. Impressively, it’s done so even as certain promised elements of the story have gone largely ignored. (Concrete details about the girls’ full flip to barbarity and the cannibalism that ensued have so far only been hinted at, usually by someone other than the Yellowjackets themselves.)

Then again, maybe the mystery was never the point of the story to begin with. With only two episodes left, more and more viewers are beginning to resign themselves to the very real possibility that the rapidly-approaching finale (airing January 16) might leave some of the most compelling questions unanswered. The early order of a second season — and the confirmation that Lyle and Nickerson had always pitched Yellowjackets with a five-season storyline — do nothing to quell these concerns, yet tuning in every Sunday is still the highlight of my week.

Rather, what’s possibly enrapturing viewers is a genuine interest in these characters — more specifically, in these women — acting out in ways that complicate and challenge traditional notions of femininity. After all, Yellowjackets started with the women. Not with a mystery. Back in 2017, Warner Bros. announced plans to develop an all-female version of Lord of the Flies, immediately inciting a wave of internet-based backlash. Many balked at the suggestion, insisting that William Golding’s 1954 story of teenage tyranny would never work with a group of women, who’d naturally be less inclined to succumb to such antics. For Lyle and Nickerson, however, this belief that the capacity for savagery was inherently gendered felt unfounded. In fact, women might fare even worse (hence the cannibalism). From there, the pair created Yellowjackets.

Though it’s not the sole reason for the show’s existence — inspiration was also likely drawn from the 1972 tragedy of Uruguayan Air Force Flight 571 — this fundamental interest in exploring a different side of womanhood feels essential to Yellowjackets’ addicting appeal. The women of Yellowjackets are refreshingly conniving, delightfully unhinged. They commit adultery under their own roofs and blackmail their bratty children into silence. They “borrow” guns from the officers they’re casually sleeping with and excitedly snort spilt cocaine from the dirty carpeted floors of cheap motels. If you aren’t careful, they might even drug you with stolen medication from their place of employment, right before tying you up in their basement and holding you hostage Misery-style. Week after week, the women of Yellowjackets continue to surprise. I almost feel compelled to tune in and see what these delinquents will do next.

Of course, sure, the mystery is still a key part of the allure. Yellowjackets (much like Succession last year) is one of few shows I’ve refused to screen in advance. Debating with my friends whether, say, the charming but clearly deceptive Adam (Peter Gadiot) is actually the blackmailer giving all the adult Yellowjackets hell or possibly even the “wilderness baby” come back to fulfill some Oedipus-like sexual fantasy, has been just as vital to the overall viewing experience as watching the episodes themselves. Even if I won’t find out about its true meanings until season three, yes, I am still quite interested in the story behind that strange symbol that was seen in the woods and was later spotted at the supposed “suicide” site of Travis (Kevin Alves), one of the only men to be stranded with the soccer team. Also, how does Jackie (Ella Purnell) die? Is she dead? Don’t even get me started on the debate over whether Lottie is actually clairvoyant or just suffering without her medication. And, oh yeah, when are we going to find out who gets eaten? Next week? The week after? Maybe in the finale of season five? All I know is, either way, we’ll keep watching regardless. Now, has anyone seen my fentanyl-filled chocolates?

Yellowjackets airs every Sunday on Showtime.