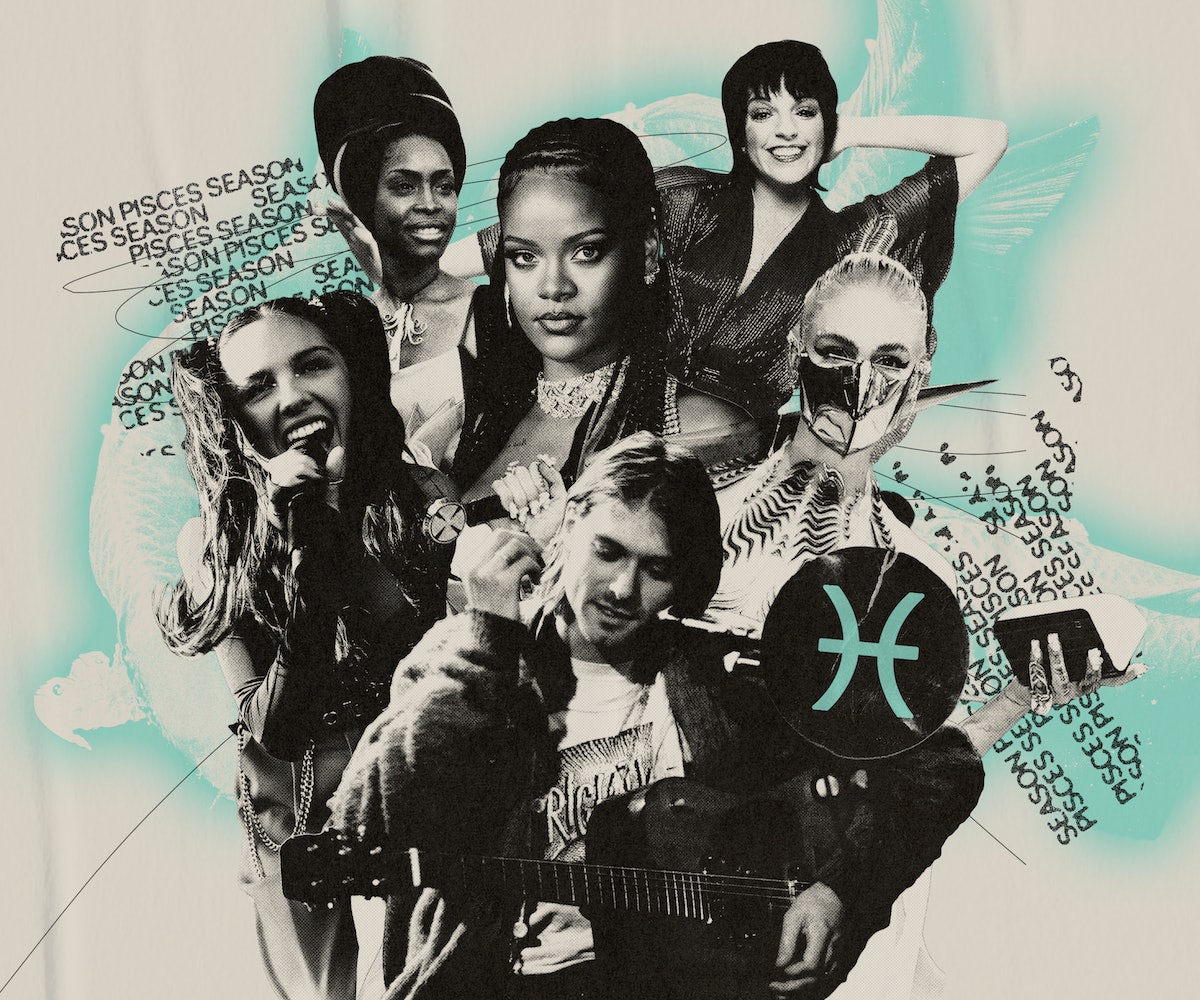 Before the rebirth of spring comes the pileup of black ice and old history. As the snow thaws at a new dawn, so melts down every frozen remnant of the past: the pain, the gifts, and the power. Cancer season brought Jack and Rose together on the Titanic; Scorpio introduced an iceberg into the proceedings; Pisces plunges us into the sea where lost souls await among the buried sapphires.

Pisces not only finishes the winter, but closes out the entire zodiac, collecting all the lessons and experiences of the other eleven signs. Unlike fellow water signs Cancer and Scorpio, Pisces has no shell or defense, making it the most empathic — and endangered — of signs. Ruled by Neptune, planet of higher, or altered consciousness, and Jupiter, planet of expansion, Pisces can ride the invisible channels like a wave. But this is a deluge with no floodgates, making it a daily battle for Pisces to keep its feet bound to the earth.

Aries season has it easy; arriving at the spring equinox, Nowruz, and Passover, it’s all light and liberation. But to step into the sun, we first must unbind in the shadows. Pisces completes its work in the darkroom, the studio, the basement, the sarcophagus, the shadow realm where egos can be dissolved and generations of karma can be healed. This is the sign of Jesus Christ — did you think it would be a breezy assignment?

If the Piscean cannot find a creative release, they’ll be consigned to the fate of Erykah Badu’s Bag Lady, breaking her back under too much history. Badu’s home and studio have become mythic incubators, where rappers and luminaries gather to make art and babies. Meanwhile, the quantum Piscean Grimes completed her breakout masterpiece, Visions, on a three-week bender, not sleeping or eating, locked away in a windowless hovel. It all goes down in the liminal realm.

But when Pisces doesn’t find a means to channel the frequencies, the waters stagnate with bitterness and remorse. The basement studio becomes the catacombs of the Phantom, where the litany of Pisces serial killers, including Richard Ramirez, John Wayne Gacy, and Aileen Wournos can stash their bodies. Without levees to disperse the flooding, the horrors of the past seep into the radioactive present, and former victims can’t awaken to their own perpetrations. Without balance or accountability, Pisces spins out their traumas at an oceanic scale, rampaging without end like Harvey Weinstein.

Is that it, then? Release or destroy? At the end of a karmic cycle, Pisces bears the burden of our somatic and invisible traumas, making it the domain of great healers and great sufferers. The legends of the tribe have battled, if not overcome, lifetimes of addiction, affliction, and sacrifice: Liza Minnelli, Elizabeth Taylor, and Nina Simone collectively have faced a WebMD server of grisly prognoses. After being diagnosed with paralyzing viral encephalitis, Minnelli, in an act of camp glory, literally danced her way back to strength, just like Taylor, who literally broke her back filming National Velvet. The sign of karmic reconciliation delivers life as a package deal; with the gifts come the hardships, often concurrently.

Unlike its polar opposite Virgo, a sign in constant pursuit of perfection, the two fish can only coexist in a state of messy contradiction: triumph and tragedy, loss and ecstasy, sacrifice and victory. Rihanna has never lied about her vulnerabilities or the relationships which have damaged her as she has exposed histories of intimate partner violence with Chris Brown, and financial swindling from her father and former accountant. A sense of pyrrhic awakening permeates her music videos, from “We Found Love” to “Needed Me” to “B*tch Better Have My Money,” their protagonist armed, perhaps too late, with firearms and clarity. In affirming her humanity, Rihanna has evolved from a packaged pop product to a wise master, a ruler who governs from lived experience. Let Beyoncé claim godhood; Rihanna will remain here on earth, smoking a blunt, and making sense of the pain.

“Happiness comes from drugs, not relationships,” said Erykah Badu. For Pisces, the high is indistinguishable. Though the tempestuous affairs of Elizabeth Taylor and Drew Barrymore would become their own tabloid cottage industries, the highs, and heartbreaks, were always real for the women at the eye of the storm. For a Pisces, love is the most dangerous lure. By design, Pisces seeks communion, to enter an ocean where each of us is but a mere drop, to share its gifts infinitely among the masses. But if you’re going to dissolve your ego, what is the sacrifice in service of, or whom? Will this love shape a divine unity, a higher composite being, or have you just given up your entire identity to some loser in finance? No wonder Pisceans have a reputation for last-minute about-faces, ghosting into the dead of night. Without any real security in self, escape is the only option.

So much karmic weight, under such a deluge of emotional intensity. Is doom the destiny for every Pisces? Must every generation watch its chosen one die young, enervated, and abused, like Karen Carpenter or Kurt Cobain? With great talent comes great vulnerability. And to be clear, this is the kingdom of the greatest talents: Albert Einstein, Alexander McQueen, Walter Mercado, and Nina Simone weren’t exactly blips. But if the Christ narrative carries with it sacrifice and betrayal, so does it ensure a resurrection. Dare to consign Liza Minnelli, Catherine O’Hara, and Drew Barrymore to obscurity. They’ll be back.

For Pisces, a static ego is like a straightjacket. Its savviest icons have embraced multivalence, unburdening themselves from the manacles of fixed identity. Why restrict yourself to an image, a brand or a set course when you could be everything? By turning down the role of Sidney Prescott and instead demanding the opening slay in Scream, Barrymore set in motion the stab that changed cinema. It was Barrymore, as a producer and curator, who secured funding for Donnie Darko and clenched the casting of Demi Moore in Charlie’s Angels: Full Throttle. Rihanna doesn’t need to shill out concert tours to ensure world domination; she can just launch a billion-dollar beauty empire that changes the world.

Like Badu, the musician, actress, Reiki master and doula, Grimes demonstrates the great possibilities of blasting down all the dams at once, to see what comes in with the current. But to wield such multivalent talent is to be exposed to danger, and to walk alone (often with swords and lightsabers). Pisces needs freedom to rebel, to defy, to define itself in opposition. By learning to play at least five instruments, directing many of her own high-concept videos, and asserting authority over her musical catalog, Grimes has demonstrated the benefits of well-served rebellion, of swimming upstream to defy the expectations of a misogynist industry. “I don’t wanna be just the face of this thing I built,” Grimes said. “I want to be the one who built it.”

Though space and freedom is essential to the Pisces individual, the power they channel is universal, ever-sustainable and all-powerful. “I see a whole big picture,” Badu said. “I see freedom for the slaves and the slave masters. For everybody.” This is the Voltron mind, a Cerebro machine that can link all mutants on earth, or in the words of Dune’s Lady Jessica: “A mind powerful enough to bridge space and time, past and future, who can help us into a better future.” Over the rainbow and upon the ocean floor, there won’t be any other zodiac signs, or even selves. Everything will be liquid consciousness.

So build your Pisces a playroom, a darkroom, a door, a vessel, a dam to finally channel the infinite spectrum of pain and possibility. Something profound is coming through. You just have to find the right frequency.

NEXT UP
Culture
The 2023 Oscar Nominations Full List Is Here
Astrology
February 2023’s Full Snow Moon in Leo Embraces The Real You
Astrology
How to Use Astrology to Access Past Lives
Astrology
Your February 2023 Horoscope Is A Breath Of Fresh Air
Style + Culture, delivered straight to your inbox.