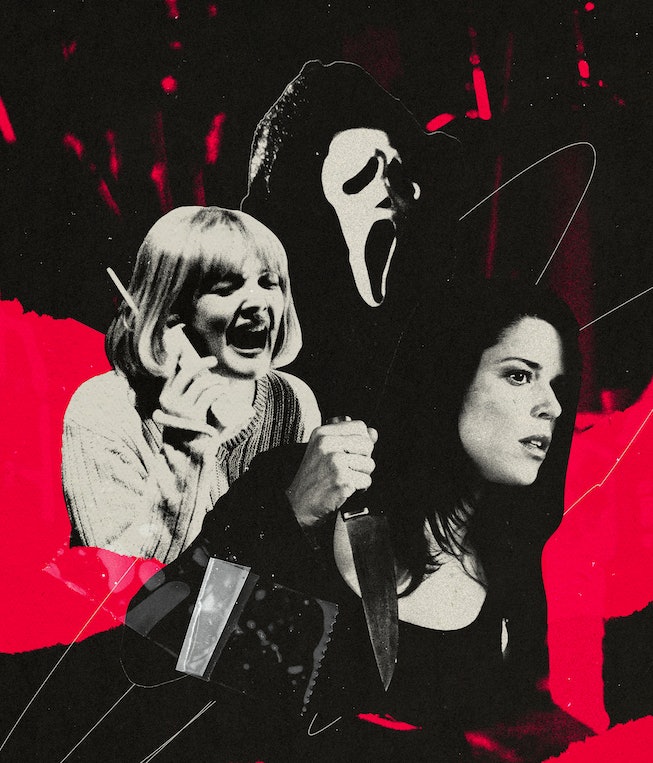 Racing towards the event horizon of Y2K, the late 90s synthesized the preceding decades at an uncanny rate. For every battlefield of the early-90s culture wars came a new mode of deconstruction: Sex and the City rose from the ashes of the Camille Paglia’s nuclear blast zone; South Park roasted the last dregs of Tipper Gore propriety; and Britney Spears would go where anti-porn feminists could never follow. But how could pop-postmodernity make sense of the murder decade, the era of O.J. Simpson and JonBenét Ramsey, of Jeffrey Dahmer’s arrest and Hard Copy, when a high-profile court case could far outshine a major motion picture?

Enter 1996’s Scream, the slasher masterpiece that awakened horror for a new century, all premised around a conservative Mortal Kombat nightmare: What if scary movies really could make killers out of teenagers? Released just months before Buffy the Vampire Slayer would premiere on the WB, Scream portrayed its porn-addled teenagers as too smart for their own good, aware of their own clichés even as they were being stabbed to death.

The killers of Scream, and its brilliant sequels, wanted to claim the glory of their favorite murderers, whether they originated in real life or on the screen. Their foil then would have to be incorruptible and immune to the lure of celebrity bloodshed. And so, through four chapters of the Scream saga, Neve Campbell’s hard, honest, hopeful Sidney Prescott would triumph over the bloodiest stabs at fame, curtailing the rise of those who equated a killing spree with a celebrity sex tape. Her only equal was her opposite, the opportunistic and ambitious Gail Weathers (Courtney Cox), a camera-ready Lois Lane as deeply enthralled by the screen as the killers she was covering. Sidney’s purity, and Gail’s compromise, would ensure a moral arena far more complex than the routine and binaristic good versus evil of Halloween.

Every great horror franchise has its Final Girl, the sole survivor lucky or plucky enough to outrace death. But none can compare to Campbell’s Sidney, whose unflapping sanity brutally reflects the funhouse mirror of our fame-warped reality. Enduring through one consistent cinematic canon (with no reboots, unlike the Alien, Halloween and Terminator sagas), Sidney has evolved from a survivor of high school tragedy to a force of nature, a counterbalance to the mass delusion of the cultural moment. With each sequel and the escalating bloodbaths that ensue, Sidney’s survival becomes ostensibly more ridiculous: Who could possibly endure all of this? But as the movies progress, Sidney’s life becomes our own, one where the savagery of celebrity pervades everything. The whole world is Woodsboro. And without Sidney, the nightmare is never over.

Before Campbell and fellow survivors Courtney Cox and David Arquette return for the new Scream on January 14, we revisit Sidney and Gail’s journey through the first four entries in the Ghostface Saga.

Welcome to Woodsboro, California, a perfect microcosm of a small-town America that never existed, where a Party of Five actress would soon have to run, fight, and stab her way to survival. With the opening murder of Drew Barrymore, the film’s biggest name and assumed protagonist, so died the archetype of the virginal blonde babysitter, outrunning her masked attacker. The real Final Girls of this franchise would have to be savvy to the rules of a postmodern massacre, and to killers who desired global fame as much as they did raw carnage. For Sidney Prescott and Gail Weathers to be the last ones standing, they’d have to be smart.

From the start, Sidney is in on the joke. “Do you like scary movies?” asks a raspy voice on the phone receiver. “What’s the point?” she responds dryly. “They’re all the same. Some stupid killer stalking some big-breasted girl who can’t act who is always running up the stairs when she should be running out the front door. It’s insulting.” As Sidney inevitably finds herself cast in the role she finds so demeaning, she must contend with the cliches of her gender, and the genre. To beat the game, she’ll have to play by its rules.

By the time Billy and Stu (Skeet Ulrich and Matthew Lillard) launch into their dramatic monologues detailing their grand plan at Billy’s house of horrors, Sidney knows that her only way out is an alternate ending of her own devising. “You pansy-ass mamma’s boy,” she says, as she stages a trap for the killers. In the end, Sidney and Gail stand over the body of their attacker, their perfect bangs matted with blood. By the rules of horror, they should both be dead, the virgin who “gave it up” and the reporter who asked too many questions. But Sidney and Gail have opted for reality, once and for all.

“I hate this shit,” Sidney says. She’s trapped in a crashed cop car, crawling over an unconscious Ghostface to get out with her life. This time, the horrors of Sidney’s past have been unleashed in the popular imagination: Gail’s book, The Woodsboro Murders, has been adapted into a horror movie, Stab, which stars Tori Spelling as Sidney. The pigs have taken over the slaughterhouse, as the discourse on murder and movies pervades the halls of Sidney’s college, and leads to a killing at the Stab premiere.

As everyone tries to cash in on the bloodbath business, Sidney finds herself recast from survivor to celebrity, the It Girl of a new massacre. This new arena of fame attracts even the most tawdry of spectators; Gail, repulsed by the tasteless indifference to death, gives up her microphone. But Sidney doesn’t have a choice to walk away from this: rather; she must surrender to her new role, or calling, as the sole voice of sanity in a cartoon reality.

In a theater production of Agamemnon, Sidney plays the seer Cassandra — gifted with perfect foresight of what’s to come, cursed to never be believed. Sidney knows that the so-called masterminds behind these killings aren’t great cinematic intellects, but grieving mothers and lost children. But to survive, she’ll have to use her celebrity as a chess piece, and play the artifice to her advantage. If Sidney has to be the star, she gets the final cut.

In 1999, The Matrix suggested that our reality is a simulation. The following year, Scream 3 made the world into a film set. Scream 2 introduced us to Stab, a movie within a movie; Scream 3 would arrange its killings on the set of Stab III, with the actors reading their own deaths in real time. Gail Weathers feuds with an actress playing Gail Weathers, entangling Courtney Cox and Parker Posey in a legendary duel for camp supremacy. Future award-winning satires like Birdman, and even the latest Matrix entry, would ape Scream 3’s Hollywood meta-commentary, but none could pull off this level of self-awareness.

By now, Sidney’s genuine traumas have been recycled into cultural shlock, campy sets for B-actors to populate. As the “real” world has become a movie of her life, Sidney has largely walked away, choosing seclusion to avoid more exploitation. But as she walks through a studio recreation of her childhood bedroom, Sidney is given a chance, through the cinematic imagination which has so consistently terrorized her, to confront her past and move on. When the killer calls for a final face-off, Sidney doesn’t run but walks in willingly. This time, she gets to end the trilogy on her terms.

Over a decade after the events of Scream 3, “celebrity victim” Sidney Prescott returns to Woodsboro for the book tour of her memoir Out of Darkness. Of course, she should have known how this would go. A new killer is on the loose, “rebooting” the massacre of the original on a new cast of suburban teenagers. By now, Sidney isn’t just the improbable survivor of multiple bloodbaths, or even the protagonist in this killer’s game. As her high school-aged cousin Jill (Emma Roberts) and her friends are preyed on, Sidney must act as mentor, and protector, to a new generation of traumatized women.

But Sidney didn’t realize that the new generation would be more cynical than her own. Predicting the decade to come, this installment’s killers understand that trauma is a commodity worth its weight in gold, that to be a star, as Jill says, “you just gotta have f*cked up sh*t happen to you.” The new killer wants full control of her narrative, to get away with murder and get the credit for surviving it.

Sidney and Gail, having lived through real trauma, have no interest in glamorizing it, and can therefore not be allowed to live in this new world order. In the “Woodsboro Massacre Reboot,” where the Final Girl kills for her shot at fame, Sidney is the real villain, the defector from the script, the nemesis who refuses to die, or, better yet, cash in on surviving. Jill will do anything for the part of lead ingenue, but Sidney understands that some parts choose you. None of the next generation of Woodsboro survives this tragedy. Sidney and Gail, standing over the corpse of yet another failed mastermind, know the truth: To become “victim royalty,” you don’t take the easy route to fame.

When the first Scream premiered, in 1996, it spoke to an era of sensationalized brutality, of tabloid crimes and Hollywood killings. But in 2022, murder has gone highbrow; a killer doesn’t need a movie when they can have an Emmy-winning HBO miniseries. The shimmer reality of Woodsboro continues to refract around us, and the celebrity murderer is as popular, and powerful, as ever.

By now, Sidney and Gail can no longer pretend that they’ll return to normal life when this is all over. A new generation will always fall prey to the seductions of fame and fantasy. Sidney is no longer a survivor, but an anomaly, a relic of a time before reality became a movie, a referendum on the theatrics of pop delusion. The media will kill you if you let it. Perhaps only Sidney can cut the cameras.

NEXT UP
Culture
The 2023 Oscar Nominations Full List Is Here
Culture
The Madonna Biopic Is Being Scrapped
Culture
Kaia Gerber Won’t Stop Until She’s Cast As Patti Smith In A Biopic
Culture
Marie Faustin Loves To Waste Men’s Time
Style + Culture, delivered straight to your inbox.