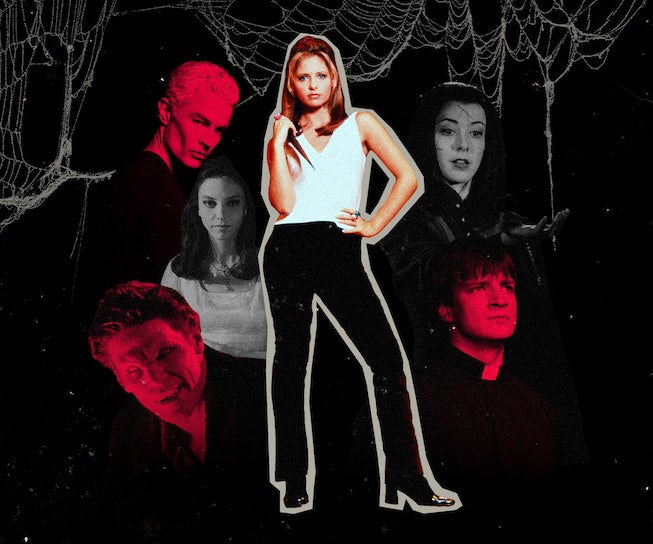 With the Hellmouth positioned directly under Sunnydale High School, the small California town can’t help but be an unfortunate magnet for all types of supernatural freaks. Every good hero needs an adversary, and Sunnydale’s resident Slayer has a continuous stream of Big Bads hellbent on destruction.

Across its seven seasons, Buffy the Vampire Slayer covers the entire spectrum of evil, from the treacherous humans who lust after power to the undead who feed off torture. Buffy has no issue staking a typical fiend from Hell, but the Big Bads of the Buffyverse are a different beast. If Buffy wants to make good on her promise of saving the world, she’s given no choice but to up her Slayer prowess — again and again and again. While the Big Bads are united in their ultimate desire to trigger the apocalypse, the writers of Buffy the Vampire Slayer knew that crafting the ultimate enemy requires more than the desire to kill; the stakes are higher and the hurt is deeper when the Slayer has to go head to head with those once close to her heart.

As the undisputed worst season of Buffy The Vampire Slayer, it’s no surprise that Season 4’s Big Bad, The Initiative, is also a major snooze. This secret U.S. agency wants to study demons for military purposes — as if the military industrial complex hasn’t done enough damage to the world! The agency’s leader and UC Sunnydale professor Dr. Maggie Walsh can’t even control her own creation, Adam, and spends way too much time with Riley Finn, making her mind-numbingly boring by association. Next!

The Mayor is a simple man: All he wants is to become a demon and achieve immortality by any means necessary. With a pleasant, cheery demeanor, The Mayor is perhaps the Buffyverse’s most playful Big Bad, and his road to demonic power is far more campy than spooky. His time as a demon after The Ascension is short-lived, and the mayor gets blown up — along with Sunnydale High — by Giles and Buffy. He’s not all bad, either; he was a father figure to Faith, and God knows she needed the love.

The yin to Buffy’s Yang, Faith is the reckless bad girl our blonde heroine never allows herself to be. “Isn't it crazy how slaying just always makes you hungry and horny?” asks Faith, to which Buffy replies that she sometimes craves non-fat yogurt. Imagine! Faith’s insecurities and dissatisfaction create deep resentments against Buffy, enough for her to defect and go dark. But the only person she hates more than Buffy is herself. In “Who Are You?” Faith — in Buffy’s body — beats down on her own face calling herself "nothing," "disgusting," and a "murderous b*tch," and there’s nothing left to guess.

A sinister misogynist serial killer and a preacher? Men need to remember to pick one battle. Caleb’s evil is haunting in how it sits outside the supernatural; his sermons are chilling, and his brutality holds nothing back. The man not only serves for the First Evil, but he also gouges Xander’s eye out, leaving him traumatized and in need of a humiliating patch. His crimes are many!

Tortured poet turned savage vampire, Spike is responsible for killing two Slayers and terrorizing the whole of Europe prior to the start of the series. When Buffy gets the calling, Spike has his next target locked and loaded, and he proves himself a fearsome enemy. The vampire may have gotten his name from torturing victims with railroad spikes — and wears the trench of his Slayer victim for fun — but with the help of time and an implanted microchip, Spike’s ferocity softens, and his tender heart goes back on his leather sleeve.

As a man in STEM with hate in his heart, Warren Mears’s descent into evil is slow and calculating. Like Caleb, Warren’s sinister impulses make a person’s skin crawl. And ultimately, he wields no supernatural powers; he attacks out of base human desires for power at all costs. He not only murders his ex-girlfriend, but in his hubris, thinks he can also outdo the Slayer. When he fatally shoots Tara instead of Buffy, he incurs the wrath of Dark Willow, who doesn’t have a shred of forgiveness to offer. Warren becomes prey and meets a worthy end — telekinetically flayed alive as Dark Willow dismisses his pleas with a haunting, “bored now.”

Drusilla’s life as a devout and chaste Christian with untapped psychic powers made her a top prize to Angelus. In true psychotic vampire fashion, Angelus tortures her to insanity, kills her entire family in front of her, and finally has her watch as him and Darla have sex in a convent, before siring her. What’s a girl to do but fully embrace being a lunatic? Her frail stature and babbling riddles are a red herring; Drusilla delights in torture, and her visions and hypnosis skills make for a formidable Big Bad. After all, it takes a real sicko to hypnotize a Slayer and slice her throat with a sharp fingernail.

The sweet computer nerd Willow from Season 1 would never dream of telling Buffy "I'm the Slayer now," before throwing her against a wall, but Dark Willow can’t wait to kick every square inch of her righteous friend’s ass. Dark Willow realizes this whole Slaying thing isn’t about doing good — it’s about power. The slow build of tremendous magick is frightening to witness, and once Dark Willow reaches her apotheosis, even the “Chosen One” can’t hold her own against the grieving witch.

Watching Buffy’s first love turn against her is one of the Buffyverse’s lowest moments. After consummating their relationship and experiencing a moment of pure happiness, Angel loses his soul once again, and Angelus’ reign of terror begins anew. He torments Buffy for making him feel love, and her friends are all on the chopping block with her. His long-dormant sadistic streak goes into overdrive — necks are snapped, teenagers are stalked, and hearts are fully shattered.

There’s a crucial moment in Season 5 when Buffy finds out the hot-headed redhead on her case isn’t just some freakishly strong, run-of-the-mill demon — she’s a god. Glory is maniacal and merciless, a total narcissistic Megan Stalter character that’s able to feed on the brains of her victims until all that’s left is lifeless mush. With no empathy for human life and a determination to return to the hell dimension from which she was banished, Glory is Buffy’s ultimate adversary. But a true Slayer knows that death is her gift, and if the ultimate sacrifice is what it takes to save the world (again!), then so be it.