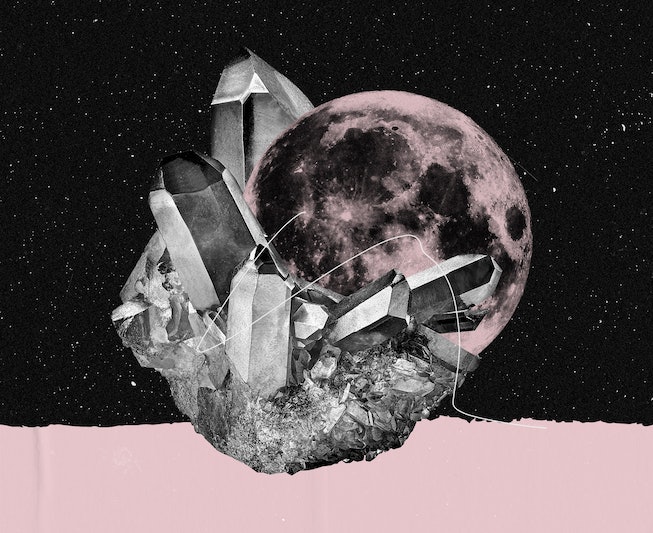 The mainstage for April’s astrology was Pisces, where a historic five-planet stellium unleashed a psychic flood. You were likely inspired, mesmerized, oversaturated, and disenchanted, in rapid succession or all at once. But with the new moon partial solar eclipse in Taurus on April 30, the Piscean waters sink into the bull’s domain, inspiring the flowering of new life. Spring has finally begun in earnest, and after so much time underwater, we get a chance to dig our feet into solid green earth.

Much of May’s action goes down in Aries and Taurus, two signs unconcerned with thinking, feeling, or subtlety. No more walking on eggshells. This month, Aries welcomes Venus on May 1, Jupiter on May 10, and Mars on May 24. It’s entrepreneur season again; after a long winter of delays, variants, and global paralysis, you can get rolling with your goals, regardless of how the rest of the world is melting down. Particularly notable is Jupiter’s entrance into Aries, which lasts through November — but is at its most productive during May, June, and July. The planet of light and expansion is entering the sign of the protagonist; after the ego dissolutions and spiritual reawakenings of the past few months, how has your mission changed? What are you ready to launch? This summer, you’re invited to step into your individual destiny, no longer a dazed new Jedi, but a fully-formed master. Trade in the blue lightsaber for the green and go off.

The Aquarius-Pisces overdrive of the last year has flung us into a digitalized global arena, where streams of stimulation keep us connected to current events, but dislodged from our own bodies. In May, the planets yank us out of the astral plane and back into sensation — which may be a rude awakening. The sun hits the rebel planet Uranus on May 5, followed by a full moon total lunar eclipse in Scorpio on May 16, all triggering bugs in the code to wake us up from our cocoons in the machine city.

Over the last few years, you’ve had to submit control of your destiny to a new and chaotic world order. But when it comes to your body, your relationships and your daily life, how have you drifted from responsibility, ownership, and self-respect? Taurus awakens our libido while its opposite, Scorpio, confronts our fear of the end. Malaise over the world ending is no longer an excuse; all we have is the immediate. What makes you feel alive? And how do you honor it?

All this talk of action and embodiment would be inspiring if it weren’t for May’s Mercury retrograde, which begins in Gemini (May 10–22) and concludes in Taurus (May 22–June 22). It’s always something, isn’t it? In his role as messenger of the gods, Mercury catalyzed divine will into tangible action. If you’re going to leave the house and make sh*t happen, this retrograde will help you learn how to play again in the real world. If your health, finances, or communications feel tangled or crushed, take this time to reset terms and best practices. A long summer awaits, and if you’re to reemerge as an active, creative protagonist, you’ll need to know your limits.

The month ends with promise, as Mars returns to its command center in Aries on May 24 and Venus returns to her harem tent in Taurus on May 28, followed by a new moon in Gemini on the May 30. Double down on what makes you feel strong, sexual, and excited, so that you don’t burn out before the adventure begins.

See where this all lands in your birth chart with NYLON’s May 2022 horoscope, ahead. (Pro-tip: read for your rising sign for the most cosmic accuracy.)

If Aries season 2022 felt like a dissociative fugue, your chance at a rematch has finally arrived. Three power players roll into Aries in May: Venus (May 2), Jupiter (May 10) and Mars (May 24). Most exciting of all is Jupiter’s return to Aries for the first time since 2011; a mighty summer of action is upon you. With the planet of light, wisdom and greatness firing direct in your sign through July, you’re ready to build, grow and create. But beware of launching too many projects at once, or veering too fast from eagerness to mania. Mars hits the fantasy planet Neptune on May 18, followed by the launch of Gemini season on May 20. With so much manic excitement surging in all at once, you don’t want to lose your grip on the steering wheel.

The hand of fate is on you this month, with several cataclysmic, combustive transits in a row. This is a once-in-a-lifetime year for Taureans, and May presents even climactic choices for a Felicity season finale. The month starts off explosively, with the sun hitting Uranus, the bringer of upheaval, on May 5, and the sun hitting the north node on May 13. Words like “destiny” and “choice” come up with these transits. Whatever’s been building under the surface is ready to emerge. The full moon total lunar eclipse in Scorpio on May 16 promises to lay everything out — the fears, traumas, and buried ambitions — so that you can choose your path forward. As Mercury retrogrades into Taurus from May 22–June 2, you'll have a chance to put the pieces together after a marathon of revelations. There’s certainly no going back now, but that doesn’t mean you can’t stop and say goodbye.

Yes, there is a Mercury retrograde in your sign starting May 10. With Mercury sliding back in Gemini through May 22, and continuing into Taurus, and finally going direct June 3rd, don’t overload yourself. This retrograde will certainly be a pain in the ass, but there’s plenty of bright spots worth looking out for: Mars hits Neptune in your career arena on May 18, blasting open new imaginative possibilities just in time for Gemini season May 20. On May 21, Mercury comes into a cazimi, or conjunction, with the sun, helping to clarify what’s coming through the channels. And in the final, darkest days of the Mercury retrograde, a new moon in Gemini on May 30 returns you to your voice. Stay alert and take care of yourself, lest you miss the month’s rewards.

With Venus, Jupiter, and Mars entering Aries in May and lighting up your tenth house of career, there’s a tremendous bank of fuel to tap into. This spring’s eclipses go down in Taurus on April 30, in your eleventh house of audience and impact, and Scorpio on May 16 in your fifth house of creative expression. We know you’re motivated, but what drives you? The eclipses awaken the deeper inspiration, meaning, and ethos of what you’re putting out into the world, so that it’s not just empty ambition. Connect with the mentors, artists, and collaborators to expand your worldview.

Taurus rules your tenth house, the seat of the king’s throne, where you bring your dreams and ambitions to fruition. This month’s transits call for decisive action regarding the big picture. Moving through Taurus, the sun hits Uranus, planet of revolution on May 5, and then the door to destiny, the north node on May 13, followed by the full moon total lunar eclipse in Scorpio in your fourth house of home and rootedness on May 16. Bravery will be rewarded this month, especially in the face of confrontation. Act decisively. Mercury retrogrades into Taurus from May 22 through the month, giving you time to slow down and hash out the big decisions you’ve just made. But one way or another, the train has already left the station. See you on the other side.

This month’s Mercury retrograde, which rages from May 10 through June 2, will go down in your career arena. You may feel like you’re working tirelessly, with no reward in sight. Have faith that your efforts are leading to new seeds of connection and opportunity, even if the payoff feels delayed. With Venus and Mars burning through Pisces, in your seventh house of visibility, and the sun lighting up Gemini, in your tenth house of career, you are best deployed when you’re out, around, and getting noticed. Focus on output and on taking chances. By the time of the Gemini new moon on May 30, you’ll begin to see the fruit of your labors.

April’s Pisces pile-up went down in your sixth house of the body and limits, inspiring a creative self-definition of your sexual, artistic, and physical boundaries. On May 10, Jupiter sets up shop in Aries, setting the spotlight on your seventh house of public visibility for the whole summer. After so many months of meditating and contemplating, it’s finally time to strike. Embrace connection — and even confrontation. Every impact will inspire kinetic energy and propel your momentum. The full moon total lunar eclipse in Scorpio on May 16 goes down in your second house of self-worth. Embrace the makeover! Let yourself be seen in a whole new way.

April’s Piscean pile-up awakened your fifth house of creative expression, and May’s big transits go down in Taurus, your polar opposite sign, which gives form to your inner chaos. With the sun hitting the north node in Taurus on May 13, and the full moon total lunar eclipse in Scorpio on May 16, you’ll feel like Peter Parker waking up after the spider-bite, renewed and ready to soar. You’re ready to act in the world, but to do that, you’d have to surrender control of how you’re seen. Taurus rules your seventh house of relationships: Turn to those you trust for guidance, strength, and tutelage. You’ve never been more powerful, which means you’ve never been more vulnerable.

April ended with an eclipse in Taurus, in your sixth house of physical health. May 16 brings on another, this time in Scorpio, in your twelfth house of mental health. The focus for May is balance: What are the returns for your work? Where are you pushing yourself too hard? What are your limits? Taurus season brings up questions of worth and ownership. The momentum, inspiration and support is there and ready to be cultivated. It’s on you to set the terms for a success that can be sustained in the long-term.

To shake yourself out of the existential malaise, get back to the basics. With Venus, Mars, and Jupiter entering Aries in your fourth house of subconscious inspiration, you’re called to revisit the ancestral, spiritual, and creative influences that feed your inner children. Don’t worry too much about who you are, but rather where you come from, and what’s at the core of your ambition. Taurus season awakens a rush of fertile power in your fifth house of play, pleasure, and creativity; see what blooms this spring before you try to brand it.

What’s long felt diffuse, blurry, or unattainable begins to take form — and it may scare you. As the sun moves through Taurus, in your fourth house of subconscious roots and inspirations, it awakens physical and material desires you thought you didn’t deserve. With Jupiter, Mars, and Venus entering Aries, in your third house of self-expression, you can experiment with new means of declaring what you want. This is a transformative month, in which your wallflower identity may be challenged for the sake of new connection and opportunities. The full moon total lunar eclipse in Scorpio on May 16 goes down in your tenth house of grand ambition. It’s time to confront your fears of claiming power.

April unleashed a historic, five-planet deluge in Pisces. The stream of awakening continues, with Venus and Mars sticking around in Pisces for most of the month. May offers chances to synthesize all the new downloads, as Jupiter enters Aries for the summer in your second house of self-worth. Think about how you want to wear and represent all the internal changes you’ve completed recently. The asteroid Vesta enters Pisces on May 24, inspiring renewed and organized ownership of your body and ritual life, followed by a Gemini new moon in your fourth house of home and rootedness on May 30. Bring form and order to your physical reality, so that your inner richness can bloom all around you.