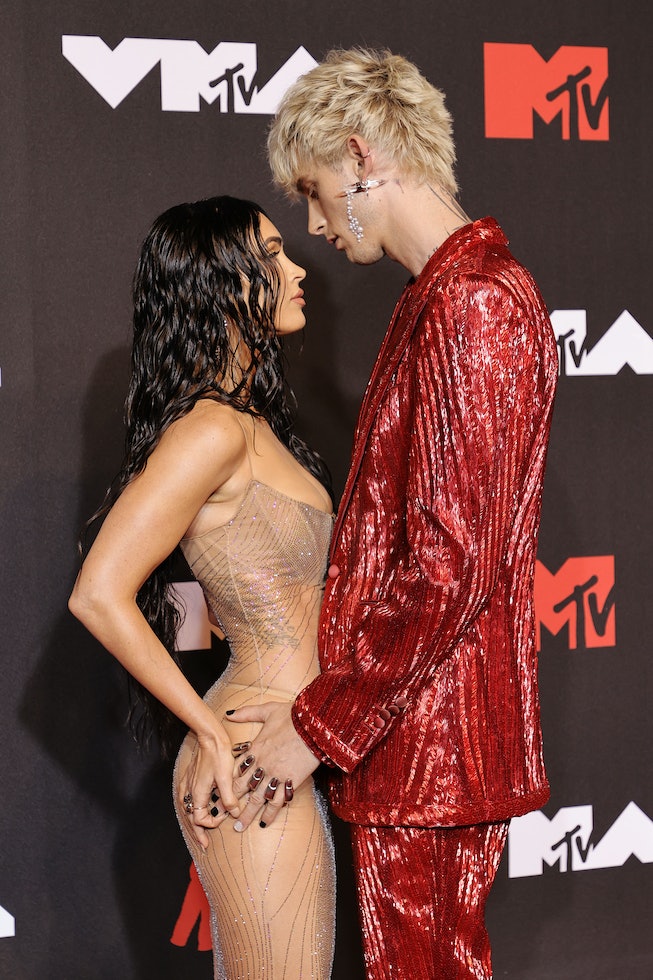 Megan Fox and Machine Gun Kelly, a goth couple who are rabidly obsessed with each other, did a wildly sensual photoshoot for the cover of British GQ that sent shockwaves through the pop culture realm. The internet reacted as it usually does: First, we were all simultaneously entranced and perplexed over the photos, which show MGK and Fox touching lips but not kissing, Fox holding a gun to MGK’s crotch, what looks like MGK sucking the blood out of Fox’s neck Edward Cullen-style, and the two putting fingers up to each other’s mouths.

But then a tiny — crucial — line caught our eye. About a third of the way through the article, Megan shares the story of when MGK and Fox first met, at a GQ party (convenient!) in Los Angeles. “I don’t remember your face... And I definitely would have remembered his face,” Megan said in the interview. “I just remember this tall, blond, ghostly creature and I looked up and I was like, ‘You smell like weed.’ He looked down at me and he was like, ‘I am weed.’ Then, I swear to God, he disappeared like a ninja in a smoke bomb.’”

Let me repeat: “He looked down at me and he was like, ‘I am weed.’” Later, the line reappears, in a text MGK sends to her in their early communication: “He sent her a couple of text messages, one that said, ‘I am weed,’ and another that repeated his filthy first line of dialogue to her, as if he couldn’t believe he’d said these dumb things to Megan Fox the first two times they interacted.”

“I am weed” has now eclipsed everything. It’s a line so funny, so lame, so iconic that it wipes away even Fox’s Tumblr poetry Instagram captions about MGK that read things like “the tale of two outcasts and star crossed lovers caught in the throes of a torrid solar flare of a romance.” (You can read all of the over-the-top, totally in love things they’ve said to each other here.) For a man in his 30s to hear one of the hottest woman on earth say, “you smell like weed,” and to look down at her and say, “I am weed,” is an absolutely bananas meet-cute.

That being said, I’m also not surprised it worked. When you’re hot, you can get away with a lot, and people like to have things to figure out. If someone said that to me, I’d immediately take it to the group chat(s), and while it is stupid, I’d enjoy how perplexingly stupid it is. Because Real Love isn’t Titanic or The Notebook; it’s people gushing over the dumb, uncool things their crushes say.

Since MGK’s current role in celebrity culture is that of a pop-punk sex god — as Fox notes, they have “the kind of sex that would make Lucifer clutch his rosary” — it’s actually refreshing to see him as just another clown who said the right thing at the right time to the right woman. “I am weed” brings MGK and Fox’s outcast, “twin flame,” “ecstasy and agony,” Twilight-esque romance down a notch in a way that makes them more relatable. Like it or not, she’s not the first among us to have fallen for a line like, “I am weed.” And she certainly won’t be the last after this interview.