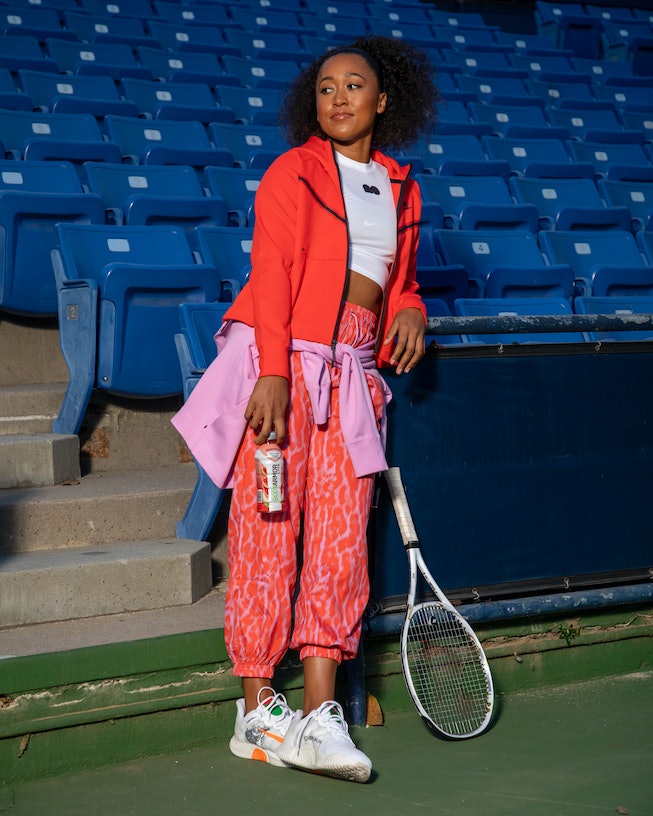 Naomi Osaka is the ultimate cool girl of tennis. The 23-year-old player, who turned pro the same year she could get a learner’s permit, rose to fame in 2018 after beating Serena Williams in the final of the U.S. Open and becoming the first Japanese player to win a Grand Slam singles title. This week, Osaka joins the ranks of other professional athletes who have given back to the communities that fostered their talents, like LeBron James and Kobe Bryant, in Akron and Philadelphia, respectively. Osaka, who was born in Japan and moved to New York at the age of three, learned to hit balls on public courts in Queens, the same borough that is home to the U.S. Open, which she’d go on to win twice. Now, along with BODYARMOR, and her sister Mari, Osaka is refurbishing those same courts on which she learned to play.

Osaka is also changing the conversation around mental health in sports, being open about experiencing depression, and has stood up for racial justice, attending marches in Minneapolis to protest the murder of George Floyd. In other realms, she just did a super cute collaboration with Levi’s that includes a denim-constructed kimono and recently got in on the NFT game. She’s better, and it’s all for the greater good. NYLON caught up with the tennis star over email in advance of the unveiling of the new courts to chat about working with BODYARMOR, collaborating with her sister, and never forgetting your roots.

Along with BODYARMOR, you are refurbishing the courts you grew up learning to play tennis. How did this project get started? Why was this important for you to do?

I really value my relationship with BODYARMOR, as from day one its always been a conversation and I have always felt heard by the brand when I came up with thoughts and ideas for how we would work together. We had been talking for over a year now about how we could do something impactful with our partnership. The more we spoke and brainstormed, the more we realized how important the Queens community was to both of us. For me, I started my tennis career here, and I’ve been lucky enough to win the U.S. Open a couple of times, which is based here. For BODYARMOR, and I can let you speak to them directly on it, the brand was founded in Queens and the founder was born and raised here. So as you can see, there are a lot of reasons that we wanted to give back to this community that we both have such deep roots in.

Can you talk a little bit about how public spaces like public tennis courts and parks have contributed to where you are today?

Growing up playing as a kid my dad would take Mari and I to public courts all the time. If we were home we would practice on these courts, when traveling we would find parks and other courts to play at. Growing up it’s not like we went to country clubs and private courts, so parks (especially Detective Keith L. Williams Park) and public spaces are a staple when you play sports. I am pretty sure if you ask any kid some of their best memories growing up took place at a park, so ensuring that this future generation has that great experience is important to me.

That’s also one of the reasons I created the Play Academy which is an initiative that gives back to under-served communities and helps try to keep young people active and playing sports.

You’re working with your sister Mari on the design. Can you tell me a little bit about the design of the courts and what inspired it?

My sister Mari is so artistic and talented and she knows I am a big fan of her art and her aesthetic. It was really special to be able to collaborate with her on this design because we actually both grew up playing on these courts and they are so familiar to us both. The design itself is a combination of colors, symbols, and even places that are inspirational to both of us as well. You’ll see a few specific locations referenced here like LA, Haiti and Osaka — those three are super important for different reasons. There are also some symbols and icons that inspire me, like music which is a huge part of my life, so you’ll see a music note, a trophy, and symbols of peace, things that just resonate and make me happy. The colors are bright, and we used some of my favorites, like blues and purples, and Mari also worked with one of our favorite graffiti artists, MASTERPIECE NYC, which is so cool. There are also a few Easter eggs if you look hard enough, but I won’t tell you where they are.

The last time I played on the courts, was a little bittersweet as I actually didn’t know it was going to be my last time. We had trained that day and then I learned we had to move. So I really didn’t have a moment where I said, “This is going to be my last time here.” The first time I stepped on the courts I was in awe as I remember thinking that there were so many courts, so many players, and so many people walking by. It was exciting and also overwhelming. There was so much happening all around me.

The U.S. Open is also in Queens. How aware of that were you when you were a kid, and do you think that event's proximity to where you grew up influenced you becoming a player?

We loved going to watch the qualifying of the U.S. Open every year. That was something we looked forward to. It was definitely something that as a kid and I set as a goal for myself and secretly wished I would be able to play in the future.

Professional athletes giving back to the communities where they grew up is, fortunately, a common thing. Was there anyone in particular who inspired you to want to give back in this way?

What a great question, I hadn’t thought about it before you asked but it’s ironic that the same person that introduced me to the BODYARMOR family, Kobe, is also the reason I strive to always try and give back to future athletes and kids. He is the reason I work so closely with the brand and he was someone who always put family and community first. A great example to help lead where I always want to go in life.

NEXT UP
Fashion
How to Shop Telfar's Rainbow Shopping Bag Drop Before It’s Gone
Life
Read An Exclusive Excerpt From I’ve Had To Think Up A Way To Survive: On Trauma, Persistence, and Dolly Parton
Life
Chloë Grace Moretz Spoke Out Against 'Family Guy' Meme Mocking Her Body
Life
Paul Mescal Is A Single Dad In Emotional Aftersun Trailer