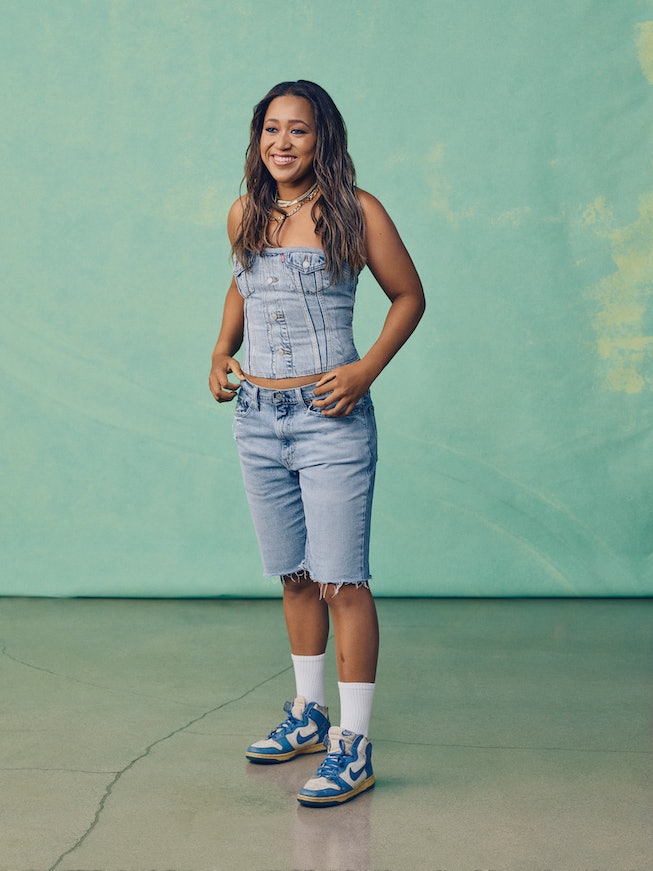 I’m not entirely sure how Naomi Osaka is fitting all of these fashion collabs into her schedule, but she’s clearly making it work. In a profile story for The New York Times, the tennis champ revealed that she has a collaboration with Levi’s on the way, complete with lace-up denim corsets and crystal-fringed shorts, according to the renderings acquired by the news outlet.

Osaka has worked with Levi’s before, starring in its Beauty Of Becoming campaign earlier this year and another for the 501 Originals launch, but this will be her first capsule collection for the denim brand.

“As a little kid, I would watch America’s Next Top Model and Project Runway, and those were sort of scratching the surface of what goes on behind the scenes,” Osaka told The New York Times, adding that her sister Mari has been helping her with sketches.

Osaka has had her plate full with fashion partnerships for some time. In addition to her work with Levi’s, she’s also dropped collabs with Frankies Bikinis, Adeam, and Nike. Plus, she’s slated to co-chair the upcoming 2021 Met Gala in September alongside Billie Eilish, Amanda Gorman, and Timothée Chalamet.

“She’s the first professional tennis player we’ve worked with,” Jen Sey, brand president of Levi’s, told The New York Times. “But for us, she rises above that. She’s such a powerful voice, the way she’s encouraged others to speak out about equality. She’s outspoken. That’s what we like about her. There’s no point in partnering with someone if you’re just going to tell them what to do.”

If you’re looking to add some fun denim staples to your closet, check out what to expect from (and how to cop) the collection, below.

What is the Levi’s x Naomi Osaka collection?

Made from upcycled denim, Osaka’s limited-edition capsule collection is definitely one you want to snag. The collab features pieces that are both sporty yet stylish and adds a dash of the star athlete’s heritage.

The collection, priced between $150 and $380, includes four distinct and versatile pieces: the reimagined Denim Kimono (featuring a matching denim belt), Lace-Up Shorts (adjustable on the back), Crystal Fringe Shorts (with crystal draped on the sides), and a fitted Trucker Jacket Bustier.

How and when can you buy the Levi’s x Naomi Osaka collection?

The Levi’s & Naomi Osaka collection will drop on Tuesday, Aug. 24, at select Levi’s stores and on the Levi’s app.

You can view the campaign images, starring Osaka herself, for the upcoming collection in more detail, below.

This article was originally published on May 19, 2021