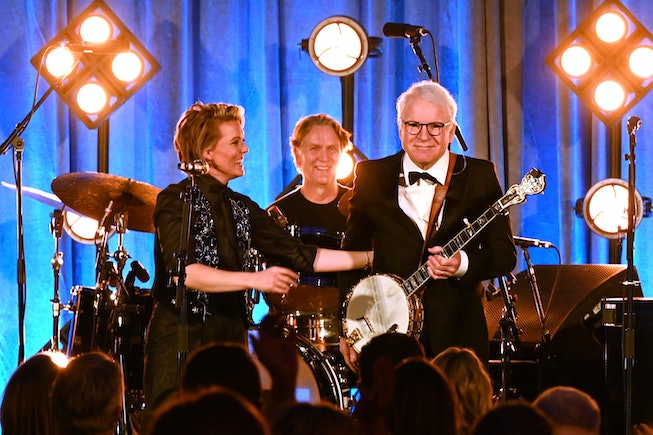 THE VIBE: “Congratulations on being rich enough to attend the Natural History Museum Gala, but not famous enough to attend the Met Gala,” Jimmy Fallon joked at the opening of his set — a sentiment that captures the wholesome rubbernecking of a night where people were equally out to support the museum as they were to see the stars. Fallon hosted the annual American Museum of Natural History Gala, where hoardes of Manhattanites with deep pockets (four Saturday Night Live tickets went for $45,000) ate pear cake and roast chicken from chef Marcus Samuelsson of Red Rooster underneath a 94-foot-long, 21,000-pound model of a blue whale suspended from the ceiling.

But before dinner, guests mingled in the foyer drinking Prosecco and eating tiny bites with hints of truffle. I spoke to a woman on the museum’s Junior Council for young patrons, carrying an acrylic Edie Parker clutch with an opalescent whale resembling the gigantic whale appended from the ceiling in the Hall of Ocean Life. She grew up on the Upper West Side and the museum is one of her favorite places in the world. “The Upper West Side is such a cultural epicenter,” she told me. “It’s hard to know whose here,” the woman’s boyfriend said. “Because it’s actors and then random billionaires from companies we’ve never heard of who maybe grew up on the Upper West Side and love the museum.” They were particularly excited to have spotted Lorne Michaels at the bar. “He was just standing there,” she said.

At an event where 95 percent of the guests are benefactors and five percent are celebrities, there’s going to be a lot of rubbernecking. At my table, a reporter from People tapped my arm to alert me to the fact that Alec Baldwin was hobbling past our table to go to the bathroom, looking worse for wear, before showing me a selfie she took with Steve Martin. “Alec Baldwin isn’t talking to anyone tonight,” a writer from The Hollywood Reporter chimed in. “I’m surprised he’s here.”

Fallon took the stage, singing a rendition of “Silent Night” in the style of Bruce Springsteen, Bob Dylan, and Mick Jagger, before cracking more jokes at the expense of the monied audience, including a jab about how people on the Upper West Side only “pretend to be upset when Republicans win,” and about how all the museum knows about one of its skeletons is that Pete Davidson dated her, the latter joke receiving a bigger laugh than the former.

Guests raised a whopping $2.5 million, with donors holding glowsticks to donate tens of thousands of dollars to go towards the museum’s educational programs. Carlile performed a solid 30-minute set including crowd-pleasing covers like David Bowie’s “Space Oddity,” and Radiohead’s “Creep,” which middle-aged women in fur, sequins, and kitten heels swayed to, glowsticks in the air like lighters at a rock concert. At one point, Steve Martin joined Carlile, playing the banjo. The evening ended with pretzels and hot chocolate, where the SNL cast congregated in a small circle and Baldwin posed for a photo with a fan. I walked by Michael Longfellow on the phone with presumably an Uber driver. Finally, no more table assignments to prevent anyone from catching a glimpse of the stars.

BEST DRESSED: Jenna Lyons, wearing a spandex turtleneck she apparently couldn’t get out of. “I went to an event tonight and my friend Sarah zipped up my latex bodysuit, but I got out of the cab and I didn’t ask her for help unzipping me, and now I can’t get out of it,” Lyons said in an Instagram video Thursday night. “I literally can’t reach. I can’t believe this is happening.”