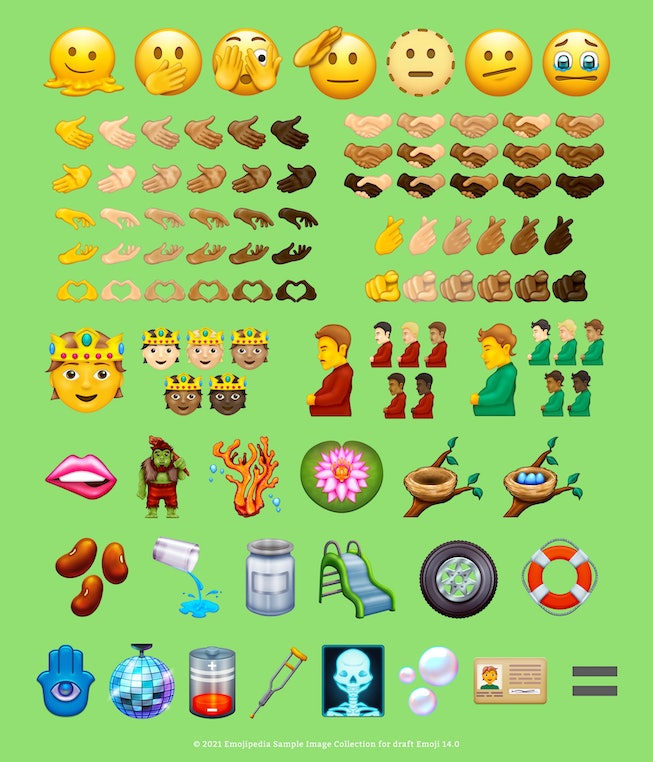 There are a few constants in life. The sun will always rise in the east and set in the west, gravity will continue to do its thing, and there will always be a fresh crop of outrageous and beautiful emojis to step up our non-verbal communication game. As the Unicode Consortium prep to rollout the Emoji 14.0 update this September, the company is teasing what could be the latest updates to come to our phones.

Naturally, the next generation of emoji are keeping up with the times and offering a new slew of gender neutral options. Users now have the option of using a pregnant man emoji, or a non-binary pregnant person emoji should they ever need to use it. Additionally, there’s a whole new category of dancing emoji across the gender spectrum — we as a society refuse to be limited to the salsa dancing emoji, disco emoji, or a duo go-go dancing emoji! The new update could very well include a flamenco dancing emoji and a disco skate-dancing emoji. Say it with us: Representation matters!

In smiley face news, the update may bring a melting smiley face into the mix, which is crucial for sending out a vibe check to the group chat. There’s also a smiley face peeking through closed hands (perfect for train wreck dramas!) and a dissociative smiley with dotted lines for a border that’s ideal for when you’re in a liminal space.

It wouldn’t be an emoji update without new hand gestures either, and the Unicode Consortium are offering up snapping fingers, shaking hands, and the cutest new option, a hands making a heart. The new offerings are available in the classic six skin tone shades, with the shaking hands being offered in mixed skin tones for that extra dose of solidarity.

Lastly, there’s a mix of totally random but lovely objects that could come to fruition, from the perverted (a biting lip, if you can believe it!) to the ephemeral (iridescent bubbles floating into the unknown). Send a lifebuoy to a friend in need or drop a hamsa for extra protection against the haters. There’s also a gorgeous coral emoji to remind you that they won’t be around for long thanks to climate change. How fun is that?

NEXT UP
The Art Issue 2022
True Life: My Partner Is Obsessed With NFTs
Culture
“Goblin Mode” Is The Word Of The Year
Culture
An Exhaustive Breakdown Of The Balenciaga Controversy
Culture
Spotify Wrapped Is The Only Social Media That Doesn’t Lie