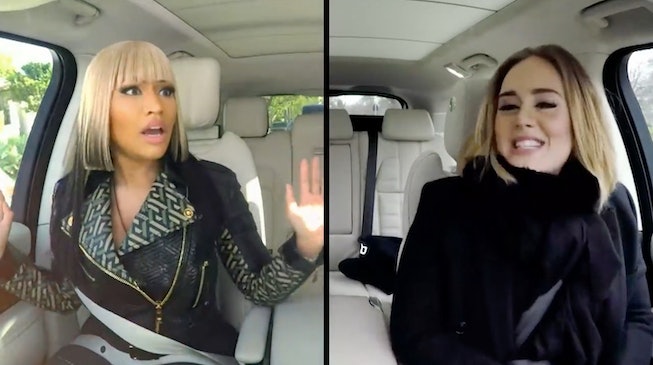 After a two-year hiatus, James Corden’s popular Carpool Karaoke series is back. The segment, which is sort of a smooth brain hybrid between Cash Cab and Tiny Desk Concert, has always been a highlight of The Late Late Show With James Corden, offering semi-regular viral clips of your favorite singers proving they don’t need a studio to sound really, really good.

The first carpool karaoke guest since 2020 was Nicki Minaj, who got the segment rebooted with a series of perfect performances across a generous 17 minutes— including a little homage to Adele on Wednesday night.

Minaj started out singing “Anaconda,” before starting to talk to Corden in a British accent, to which he responded that she sounded like Adele and asked her to do an impression. “I go viral for almost everything,” Minaj said in an exaggerated British accent, referencing the meme of Adele ignoring the camera while siting front row at a Lakers game. “People pay for these viral moments.”

A few years ago, Adele performed Minaj’s iconic “Monster” verse on Carpool Karaoke. When Corden asked Minaj what she thought about it, Minaj responded: “I just loved it. She made me so, so happy. She embodies Nicki Minaj,” she said, before launching into her own rendition of “Monster.” The show then showed a split screen of Minaj and Adele both rapping to “Monster” in unison, which I’d pay good money to see live. Watching Nicki perform alongside Adele renewed my confidence in Adele’s performance — the two are so in sync, proving just how deep of a Minaj stan Adele really is.

“She just naturally has that thing, you know what I mean? But it’s different because she’s singing these sad songs, so you don’t expect it from her,” Minaj told Corden.

Then, Corden and Minaj sang a verse of “Someone Like You,” at which point I badly wanted Corden to stop singing and let Nicki do her thing, which, even from the brief chorus, sounded phenomenal.

Later on Carpool Karaoke, Minaj performed versions of “Starships,” “Super Bass,” and “Do We Have A Problem?” After explaining she can write most of her raps in a couple of hours, she also free-styled while Corden messily beatboxed. “You did good though,” she assured him. “On the white scale, it wasn’t that white.”