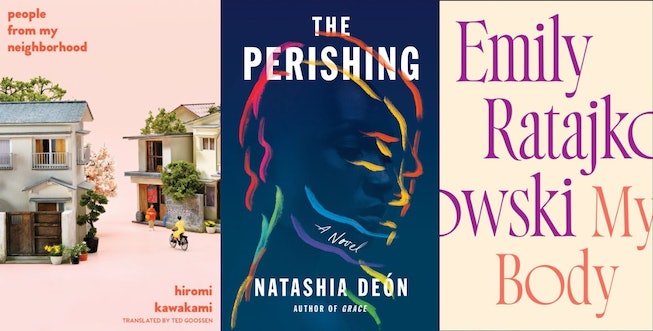 It’s officially getting too cold to wear even sweater vests and pleated skirts. The AC units are back in basements and it’s time to start sleeping in sweatpants again. I even turned my heater on for the first time. (Don’t tell my roommates.) All of this to say it’s getting to be peak cozy season, a time when people will start using rain as an excuse not to hang out and when eating soup in bed doesn’t even sound like a bummer, just comforting.

Most crucially: It’s a good time to read a bunch of books before the Christmas commercial book dump, a time when all the mediocre politician memoirs are released (remember former Governor Cuomo’s horribly timed “leadership” memoir release months before his ousting?) in hopes people will spend $37 because they don’t know what else to get their boyfriend’s mom. (I did, in fact, buy not one but two copies of the Obama memoir in 2020).

During this time, when bookstores sell what turn out to be glorified doorstops, it becomes harder to find books with more staying power, books from smaller presses, and perhaps most importantly, books that don’t have ghostwriters. Ahead, find the 10 best books to ease you into the holiday rush and fill some void you can’t quite pinpoint — including everything from Emrata’s tell-all memoir to an cyberpunk, Africanfuturist thriller.

Hiromi Kawakami writes 26 “palm of the hand” stories, or small fictions, that hit a mythical, macabre tone, about everyone living in a neighborhood, from a schoolgirl who keeps doll’s brains in a desk drawer to a child who lives under a white cloth under a tree.

Anyone who says they aren’t at least curious about Emrata’s memoir is lying! Remember her incredible lucid New York Magazine essay? In My Body, a memoir in essays, she chronicles moments from her life while investigating fetishization of women’s bodies and female beauty, contempt for women’s sexuality and the underbelly of the modeling profession.

The Underneath by Melody Flynn, Two Dollar Radio - November 16

This literary thriller about a former journalist dealing with issues around motherhood rents a remote cabin for the summer and accidentally uncovers in the attic crawlspace something terrible that happened to its owners....DUN DUN! Spooky!

Win Me Something by Kyle Lucia Wu, Tin House - November 2

Come to read about a live-in nanny deal with the antics of a rich family in Tribeca, stay for the nuanced exploration of identity in Wu’s novel about a biracial Chinese girl who grew up straddled between Asian and white identities in this coming-of-age story about belonging.

In this wry debut novel, a 20-year-old med student returns to her father’s home in Istanbul to grieve his passing. She watches a lot of Turkish soap operas with her grandma and seeks medicine for headaches but instead becomes obsessed with curing her self-diagnosed chronic illnesses through ancient medicine.

In this novel, a man found guilty of a minor offense serves his one year of community service punishment by reading to older adults and people who are disabled. He’s 35, gets his license taken away and exists kind of aimlessly in Cuernavaca, Mexico until he unexpectedly finds purpose serving his punishment.

Can I Mix You A Drink: Cocktails From My Life and Career, by T-Pain and Maxwell Britten, Penguin Random House - November 2

Honsetly, T-Pain is such a sweetie and I can’t get enough of his funny, unpretentious takes on cocktails, which include the “Booty Werk,” a citrus Ciroc, Red Bull, heavy cream concotion and “Red Cup,” which combines blueberry vodka, White Claw, creme de cassis, lemon juice and blackberry sorbet. Not only would I let T-Pain buy me a drank, but he can certainly mix me one too.

In this mystical novel, a woman wakes up on the streets of 1930s Los Angeles with no recollection of how she got there goes on to be the first Black journalist at the Los Angeles Times. After a series of strange interactions, she eventually begins to believe she may be an immortal sent to Earth for a very important reason and she sets out to investigate the mystery of her existence.

This chilling, cyberpunk, dystopian Africanfuturist science fiction novel takes place in a not-so-future Nigeria and follows a woman with some machine body parts who refers to herself as “Artificial Organism.” One day, she goes to the market and everything goes wrong. She finds herself on the run across the deserts of Northern Nigera with a herdsman, while a transfixed nation watches her escape via livestream.

Back to Japan: The Life and Art of Master Kimono Painter Kunihiko Moriguchi by Marc Petitjean, Other Press - November 9

This book is an intimate biography of the iconic Japanese textile artist and kimono painter Kunihiko Moriguchi written by filmmaker Marc Petitjean, who got close to the artist while making a documentary about him. The book retraces the painter’s life from a childhood during military conflict to making his way to being one of japan’s most influential working artists.