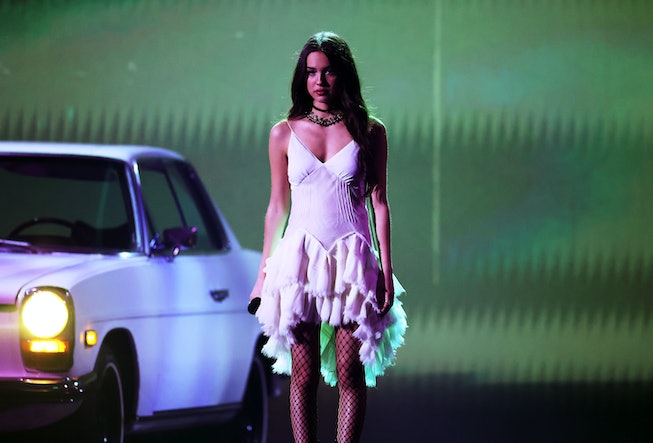 The 2022 Grammys were always going to be huge for Olivia Rodrigo. Following the wild success of her debut record Sour, Rodrigo is not only nominated across the board for awards including best new artist, record of the year, song of the year, and album of the year, but she also set the tone of the evening with one of the first performances of the night. There was only one option for taking the Grammys stage: her breakthrough single “drivers license.”

Rodrigo’s set reflected the suburbs in her lyrics: neat rows of houses lined with cars, trees, and butterflies. Dressed in her very best pop-punk uniform — fishnet stockings, Doc Martens boots, a black choker, and a flouncy white Givenchy dress — Rodrigo sang her heart out for the Las Vegas crowd.

Once again we were pulled into the emotional world of first loves and heartbreaks, red lights and stop signs... you get the picture. Rodrigo’s performance was a touching tribute to “drivers license,” which arrived in early 2021 and promptly debuted at No. 1 on the Billboard Hot 100, spending a whopping eight weeks on top of the chart.

NEXT UP
Culture
Who Won At The 2023 Grammys
Culture
The Cutest Couples At The 2023 Grammys
Entertainment
Beyoncé Is Now The Most Awarded Artist In Grammy History
Culture
Spice Girls May Reunite For King Charles’ Coronation
Style + Culture, delivered straight to your inbox.