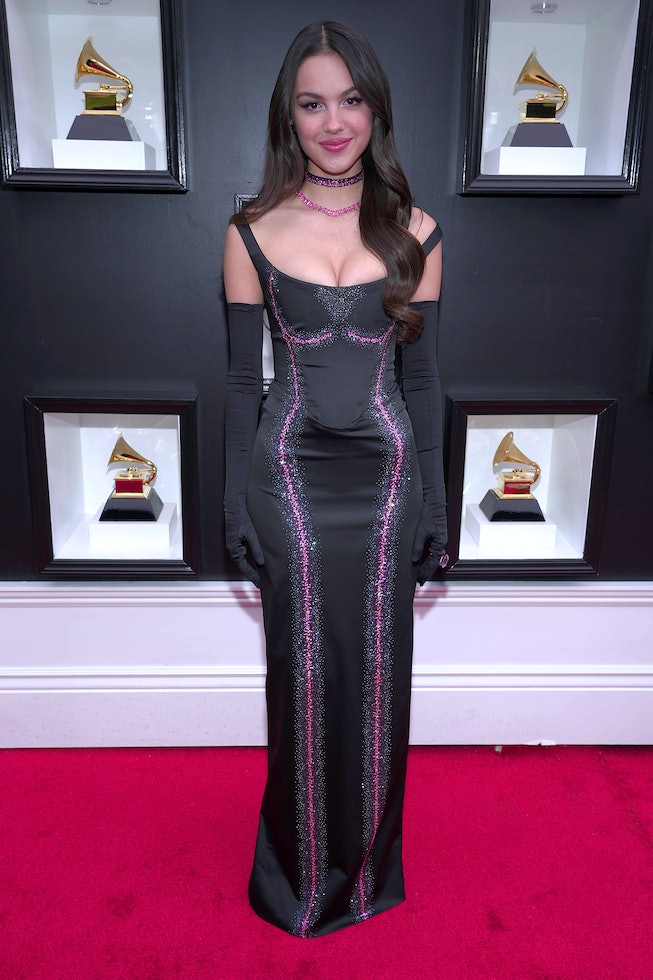 Perhaps no one is set to have a bigger Grammys night than Olivia Rodrigo, who made her debut on the red carpet in a ‘90s-inspired, black form-fitting Vivienne Westwood gown, complete with sparkly hot pink boning (in the form of Swarovski crystals) and black opera gloves. She kept her beauty fairly minimal with her hair down and — as expected from the star who helped to revive Y2K aesthetics in 2021 — topped off the whole goth-leaning look with a black choker and a hot pink Swarovski crystal choker.

Rodrigo released her debut album Sour in 2021. Thanks to the release of her wildly successful first single, “Drivers License,” which went viral on TikTok and broke records upon its release, the 19-year-old actress and songwriter has only become exponentially more well-known. She recently released Driving Home 2 U, her Disney+ music film about the making of Sour, and is kicking off her very first tour in support of the record in April.

Of finding such incredible success in music, Rodrigo told NYLON in a 2021 interview, “I've always been on [TV] shows, doing something in the public eye, but it's really awesome, now, to be recognized for my music, something so much more indicative of who I really am as a person. I feel a lot more seen. I feel really understood when people come up to me and they're like, ‘Oh, I love your song’ because it's an extension of my heart.”

Rodrigo will also make her stage debut at the 2022 Grammys where she’ll likely be performing a song from Sour. In the meantime, check out the details of her 2022 Grammys red carpet look from every angle, below.