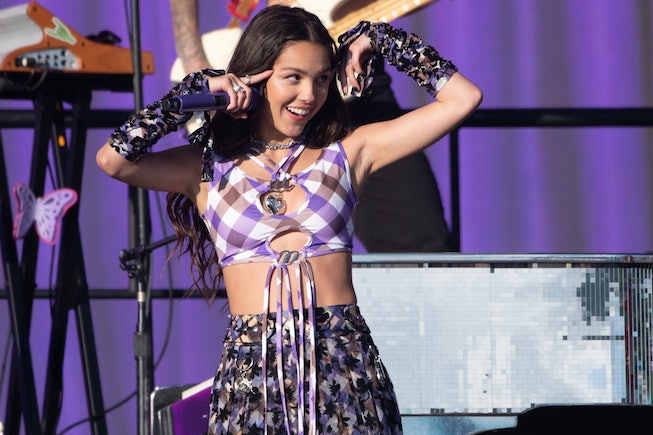 Olivia Rodrigo is the Y2K resurgence personified, from her newsboy caps to her butterfly clips, miniskirts and bedazzled tanks to her music that’s helped to usher in the pop-punk revival. So it only makes sense that the Gen Z princess of pop-punk would dip into the canon of 2002 pop songs to cover, particularly to keep things interesting during her whopping 48-date 2022 SOUR tour.

Rodrigo most recently covered t.A.T.u’s “All The Things She Said,” as captured by a fan and posted to the @oliver4evr TikTok. For the uninitiated, t.A.Tu. was a 2000s-era Russian duo composed of Lena Katina and Julia Volkova most famous for the single, which has since become an unlikely cult queer anthem.

The pop song has a lot of the same elements as Rodrigo’s SOUR, with a driving, repetitive chorus that’s best sang in a scream. Rodrigo sings in her signature snarl, but with an added breathiness that could just as easily be purposeful as it could be chocked up to a lack of diaphragmatic support. Regardless, not all fans were digging it. “im still confused if this is a prank, or people genuinly [sic] find this good,” one commenter wrote, while another wrote, “why is she singing in cursive?” Another commenter wrote, apparently commenting on her sexuality: “is there something you would like to share with the class Olivia? 🤨”

Rodrigo has been covering a handful of 2000s-era songs on her tour. Part of smattering of covers can probably be attributed to Rodrigo having one 34-minute album and an entire set to fill, but her selection of songs to cover also does wonders in terms of telegraphing her taste and influences.

On the first night of her SOUR tour, Rodrigo covered her greatest inspiration Avril Lavigne’s “Complicated,” along with Veruca Salt’s 1994 punk hit “Seether.” Elsewhere on her tour, she’s covered No Doubt’s “I’m Just A Girl,” and “The One That Got Away” by Katy Perry, which could have easily been on SOUR.

Most recently, Rodrigo performed a cover of Lily Allen’s “F*ck You,” which she sang alongside Allen at Glastonbury last weekend, which she dedicated to the five Supreme Court justices “who’ve showed us that, at the end of the day, they truly don’t give a sh*t about freedom.”

Watch Rodrigo and Allen say “f*ck you” to the Supreme Court, below.