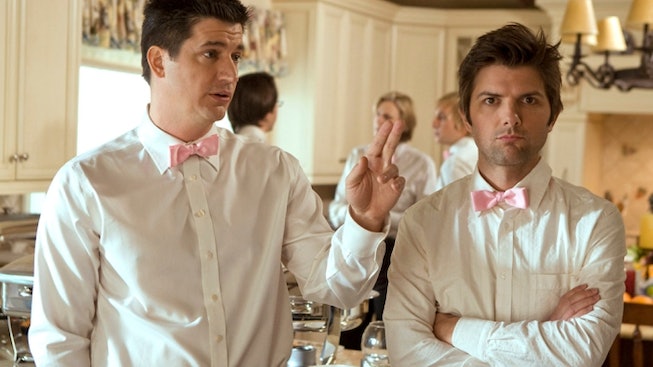 Party Down was Starz’ show before its time. Now, it’s getting another chance. Joining the endless parade of reboots — from Gossip Girl to Saved By The Bell— is the comedy about a Los Angeles catering team of actors searching for their big break. Now, it has been officially ordered as a series for Starz, as reported by Variety on November 16. Development of the revival has been in the works since March.

The show only lasted on Starz for two seasons from 2008-2009, but has since gained a cult following. It’s a show that, unlike many reboots, actually makes sense to bring back. Not only are its stars famous in their own right now, but it’s an example of mid-2000s TV that wasn’t appreciated in its time, that ended too soon. We don’t know many details yet, but here’s what we know about the Party Down revival so far. In the meantime, you can get up to speed on the original series on Starz.

One of the fun things about Party Down is that so many members of the original cast have catapulted into fame since. It’s like a time capsule capturing the early, still relatively unknown talent of some of TV’s best comedy actors. Adam Scott, Jane Lynch, Ken Marino, Martin Starr, Ryan Hansen and Megan Mullally, who all starred in the original series, have all signed on to return.

You won’t see one familiar face we all love

Lizzy Caplan, who played struggling comedian Casey Klein, is not expected to return due to scheduling conflicts. Caplan has been working a lot lately — starring recently in Inside Job, Netflix’s animated show about wild conspiracy theories. (You can read her interview with NYLON on the series here.) She also recently landed leads in a Fatal Attraction series and Fleishman Is in Trouble, the adaptation of the popular 2019 divorce novel.

It’s going to be a limited series

We love a show that knows its limits (ahem, this is a subtweet to the HBO execs who made Big Little Lies Season 2 happen) — and with reboots, less is often more. The show is set to have six episodes, which we’re guessing will be 30 minutes long, like the original series.

The creators are coming back

Along with many of the series’ stars, also returning are its creators and executive producers Rob Thomas, John Enbom, Sexiest Man Alive Paul Rudd, and Dan Etheridge. It’s always a good sign when everyone’s down to return to the party.

They know they’re giving the fans a treat

Again, we love a show that is self-aware. Reboots are nothing if not in service to the fans, and Starz’ execs seem to welcome this rule. “After more than 10 years, we’re excited to have the cast, many of whom are now hugely popular award-winning stars, return to don their pink bowties and head back to the party,” Jeffrey Hirsch, president and CEO at Starz said in a statement. “The fan demand for a Party Down revival is clear and we look forward to what Rob, Paul, John, Dan and now Adam will do as they bring this special project and these hilarious characters back to life.”