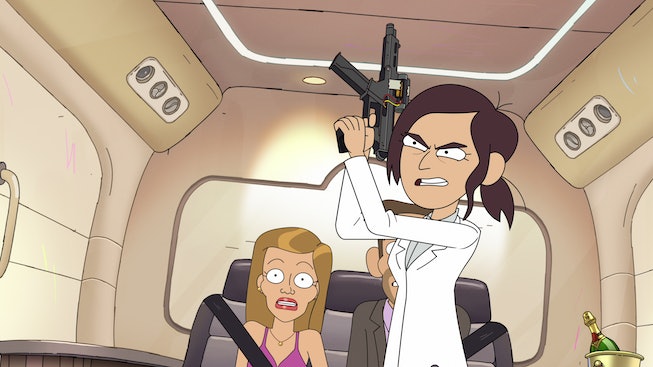 In Inside Job, every conspiracy theory is true. The world is run by a shadow administration called Cognito, Inc., a place where the Dow Jones operates by blood sacrificers, the weather is controlled by Gerald from the accounting department, and the president of the United States is being replaced with a robot.

The show is so dense with conspiracy theories it’s like an encyclopedia of the unhinged, if everything from your Facebook newsfeed or an InfoWars segment was animated. In the first episode, it references everything from the staged moon landing to my personal favorite conspiracy theory: that Avril Lavigne croaked in 2003 and was replaced by a look-a-like named Melissa, which explains the misguided Harajuku era.

Lizzy Caplan stars as Reagan, the type-A, MIT grad at 13, savant who wants to run Cognito, Inc. but after her leadership is questioned, she’s paired with a Yes Man former frat boy (who sings Dave Matthews to himself, no less) who lands the job because of his firm handshake. There’s tension between how absurd the world is (7-Elevens are called 9-Elevens) and how mundane its problems are: women being underestimated in the workplace, budget cuts, and employees sucking up to the boss because they’re afraid of getting fired.

The show was made at a time when conspiracy theories are more dangerous than ever — when they’re having real world implications, particularly when it comes to vaccinations. But, like spending time on the Internet, a show like Inside Job both raises our blood pressure and works to expunge our conspiratorial anxieties. What if shadow administration employees take selfies in front of the moon landing set? What if the president is actually a robot? What else is going on behind the scenes that we don’t realize?

“Part of the job is looking at conspiracy theories that were not so heavy and were not so serious and were not so scary,” Caplan tells NYLON. “There are more and more people who are talking about conspiracy theories, maybe more than ever before. It doesn’t feel so niche, so maybe that’s the public service of this show — just reminding us of a time where they were niche and maybe reserved for a guy who lives in a cabin in the woods alone and not half the population.”

Caplan spoke to NYLON about her voiceover acting experience, her favorite conspiracy theories, and what’s so tantalizing about them.

Inside Job premieres on Netflix on October 22.

Can you talk a little bit about how your involvement in Inside Job came about? What drew you to the script?

I was sent the script and this is a very fascinating tale: I read it. I loved it. And then I spoke to Shion [Takeuchi, Inside Job creator] and I loved her, and that was it. It seemed pretty cut and dry. Show up, it’s animated, so it takes less time to create, or at least my portion of it. In and out, easy. It ended up being something quite different, in that it ended up being a bit of a lifeline because it’s something we were able to do throughout, no matter where everyone was in the world, so I’m very grateful that at the time. I made a casual decision to do this thing that ended up taking up a lot more of my life in a really positive way.

Obviously this show centers around conspiracy theories. Why are they so tantalizing, especially right now ?

Especially the fun ones! I do think the ones we tackle in the show are more of the vintage variety. They’re fun. It’s fun to think about this stuff. So many conspiracy theories are the opposite of fun and really dark and upsetting, especially now — it’s like the majority of them now are the opposite of a good time. But I think that it probably boils down to human beings grasping for control because we really don’t like feeling that things are random and sometimes sh*t just happens. There's no reason behind it and I think for our human brains that can be difficult for us to digest sometimes.

Do you have any favorite conspiracy theories from the show?

People really believe the lizard people one, which is just delightful to me. That’s the kind of conspiracy theory I can get behind: that there are lizard people.

The ones that feel the lease rooted in truth.

Exactly. There are some really bonkers ones out in the world, for sure.

I was really impressed that the show included the Avril Lavigne conspiracy theory.

The random celebrity conspiracy theories are great. I saw one that I hadn’t seen the other day that’s not in the show, but that Prince Charles is a vampire?

I’ve seen that one! Maybe for another season.

I mean, it would work beautifully.

How do you as an actor balance the absurdity of so much of the show with Regan’s desire for the world to be a better place, which is a vulnerable, sweet, not absurd thing.

Agreed. I think that you can probably find people that feel that way in every job. Shion really identifies with that part of Reagan, that she’s on the one hand super cynical, judgmental towards people, at times eye-rolly, but the other side is that she really believes the world should and can be a better place. I don’t think we see a lot of characters holding both of these things within them and I think I follow under that umbrella as well. I think with a lot of characters, especially animated characters, you're sort of stuck with archetypes or tropes and anybody can only be one thing and I don't agree with that. I think that anyone can be multiple things.

Totally and that’s what I like about the show. It’s so high-level absurd in so many ways, but you have these characters dealing with regular office dynamics and regular human things amidst all this craziness.

Totally. That was her original idea and why she wanted to make this. The reason why conspiracy theories are so absurd is that it would require all these real people to be on the same page and that’s just not human behavior. It would be impossible to cover up. For the moon landing to be fake, so many people would have to be in on it and nobody could open their mouths, and that’s not how we do as humans.

Right, people are more inclined to want to tell all of the secrets.

Obviously you have so much more freedom in an animated show these days. With the budgets that live action shows are now getting, you can kind of create a world just as fantastical as an animated show if you have enough time and enough money, but in an animated show you can take it as far as you want to take it. There are no limits in an animated show and it can be the most ridiculous premise. Anything you think of you can draw, so I think it lends itself well to something like this. If the show goes on and on, I foresee it becoming more and more absurd and higher concept, just because, as you said, the medium affords us that.

And what about you as an actor? What’s attractive to you about it or what’s hard about it?

Really anything I can do at home in pajamas works very well for me, like I’m not over that yet. I will continue seeking out things I can do at home in my pajamas. But it’s a totally different muscle and one I really haven’t exercised much at all before this. It’s a totally new skillset and because we did this over such a long period of time, I definitely felt the muscle strengthening throughout and I feel like I understand more what it is certainly than when I first started. It should be obvious I guess, but it’s a completely different thing, because you don’t have the luxury of using your expression and your body and everything I’ve realized I rely heavily on in live action, more than I even realized. It’s figuring out a way to convey all of that emotion with just your voice. There’s a reason why the people who are sort of in all the shows and work constantly in this voiceover world is because they are amazing at it and it is a skillset that not everyone has. You’re definitely not born with it, I don’t think. You really have to hone the skill.

Why is the world especially ripe for a show like this right now?

I think conspiracy theories are now taking on a whole different lore, unfortunately. It’s depressing where the modern conspiracy theories are going. There are quite a few of them that are not funny at all and will never be funny. There are some really dark ones that even down the line in many years, I don’t foresee them becoming fodder for comedy. They’re being used to divide us as people and lead people down strange rabbit holes and it's dark, and what can we do with things that are dark? We can make art out of them.

And for me, part of the job is looking at conspiracy theories that were not so heavy and were not so serious and were not so scary. Of course, there are more and more people who are talking about conspiracy theories, maybe more than ever before. It doesn’t feel so niche, so maybe that’s the public service of this show — just reminding us of a time where they were niche and maybe reserved for a guy who lives in a cabin in the woods alone and not half the population. But we work with what we’re given at any given time.