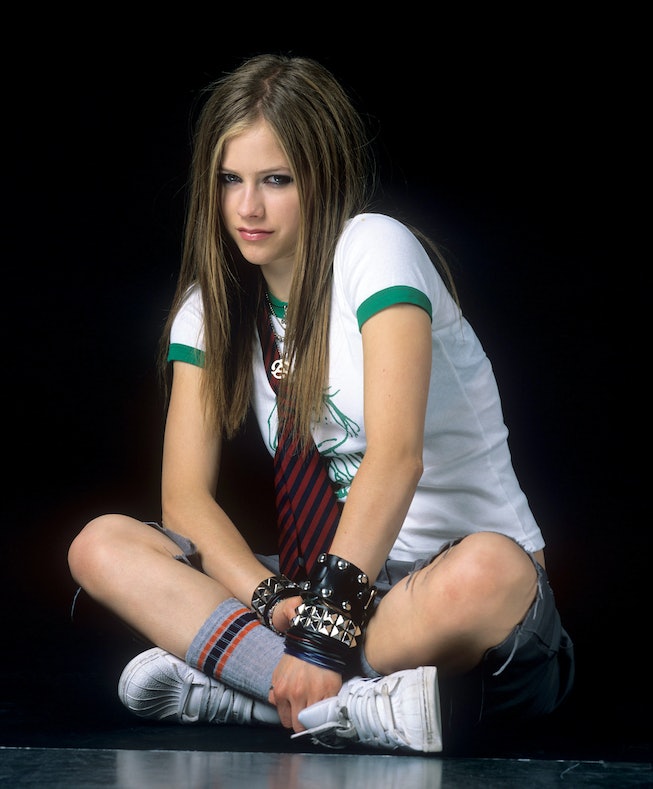 In the year 2002, culture at large experienced a paradigm shift. A petite Canadian with a penchant for wearing loose neckties sang her heart out about how much fake people suck, beginning a decades-long career that forever shifted the course of pop-punk as a genre. "Complicated" brought Avril Lavigne to the global stage, and since the release of her debut record Let Go, she's churned out one anthemic song after another for an impressive discography that still resonates today. Maybe it's her passion and authenticity? Maybe it's how her catchy lyrics double as inspiration for a life lived with no regrets? Or maybe, just maybe, it’s astrology?

The celestial bodies illuminate so much of our lives: our strengths and weaknesses, how we love, fight, and communicate, and for today, which Avril song represents us best. Is your sign built to weather the emotional storm of "My Happy Ending," or is it of a more steadfast nature like "Nobody's Fool," unwavering in its beliefs? Avril herself is a Libra with stelliums (astrological speak for a cluster of planets in one sign) in both Scorpio and Sagittarius, making her a sweet spitfire who still retains an air of mystery even after decades in the spotlight.

I may not be a professional astrologer (for that there's NYLON's resident astrologer, David Odyssey) but I did live through the era in which tweens wore neckties to school out of reverence to Avril, and that has to count for something. Find out which Avril song represents your zodiac sign, below.

Only an Aries would be so bold as to announce to their crush that not only do they not like their girlfriend, but that everyone else also knows, and they couldn’t care less. Represented by the ram, the first sign of the zodiac has can come off as fiery and brash. In some circles, we call that going after what you want!

The bull is Taurus’ glyph for a reason. As much as Venus-ruled Taureans obsess over beauty and having things just right, they’re not budging about things they care about without an extremely good, well-argued reason. This stubbornness can be annoying, sure, but for the most part, it’s about knowing who they are and having a backbone. They are, like the song suggests, nobody’s fool.

Astrology is a nuanced, helpful reflection of events and personalities, and in no way do I mean to be reductive when I say that realizing the opening lyric to “Smile” was “You know that I'm a crazy b*tch / I do what I want when I feel like it,” made me laugh out loud and go, “Yeah, that’s Gemini.” Gemini gets a lot of hate for being two-faced, but it’s only because as a mutable air sign, they know how to adapt to any situation. Geminis are indeed gossips, but that’s just their way of disseminating information. Live a little!

Where do I begin with Cancers? This water sign has a reputation for oscillating between being maternal and passive-aggressive, and I already know this description is hurting their feelings. A chorus that opens with the lyrics “Isn't anyone tryin' to find me? / Won't somebody come take me home?” feels deeply in line with the crab’s battle for survival, even when no known enemies are in sight.

Leo’s ruling planet is the sun, which totally checks out for the sign that most often mistakes itself for the center of the universe. Leos love to shine, and the best part is that they can also turn it around and be the best hype person you ever imagined. It’s all about respect and loyalty for the lion, and “He Wasn’t” is exactly what not to do if you want to stay in Leo’s warm embrace.

As a detail-oriented earth sign, Virgo is the master of minutia and systems. That’s great if you’re working with a content management system, but not the best when it comes to expressing emotions. Virgos tend to live in their heads more often than not, and what better Avril song is there to represent the sign than a sleeper track about keeping it all inside for the sake of self-preservation?

“What The Hell” literally opens with the lyric “You say that I’m messing with your head / All cuz I was making out with your friend” — this is textbook Libra behavior, people! This social butterfly air sign is a master at bending the world in its favor under the guise of “creating harmony,” and most of the time, you won’t know it even happened. In their quest for justice, Libra can end up rationalizing morally gray behaviors, for example, making out with your friend. And with Venus, the planet of love and beauty, as Libra’s ruler, you know this sign will always look sweet when inadvertently ruining your life.

Everyone has an opinion on Scorpios. They’re scary! They’re mysterious! They’re seductive! And I’m here to say that, yeah, this is mostly correct. As a fixed water sign, Scorpio only knows how to operate at a high emotional intensity. If you’re intimidated, that’s on you. Step up your integrity if you want to hang! Even as they live, laugh, and love, Scorpios are still intuitive, forever on the quest for the truth. And may God have mercy on the soul who decides to lie to a Scorpio! If you ever hear a Scorpio say “all this time you were pretending” it’s best to say your goodbyes to this world.

No one brings the party quite like a Sagittarius. The final fire sign of the zodiac is ruled by Jupiter, the planet of good fortune and great vibes, so everything it does goes big. Sensitive types might have an issue with how Sagittarius says it like it is (or how they can’t help but stir the pot), but ultimately Sagittarius couldn’t care less. An Avril song about having a bad attitude and refusing to shut up while also throwing a middle finger to the sky gets the Sagittarian seal of approval.

Capricorn is often labeled as being boring, careerist, and annoyingly industrious, which isn’t entirely wrong. Capricorn is as achievement-oriented as it gets, but that’s because this earth sign craves security above all else. Do some Capricorns dream of world domination? Of course! But most of them are simply trying to keep their head above water by virtue of collecting accolades and bossing around everyone in their life.

As the oldest air sign, Aquarius operates on a different frequency than the rest of the zodiac. It sees the bigger picture in life, which in turn imbues the sign with a refreshing sense of originality. Aquarians start trends, and then the world follows suit. This, of course, disrupts Aquarius’ delicate sensibilities. If something they enjoy becomes too mainstream, you can bet an Aquarius will annoyingly soliloquize about how no one understands them. (I’m an Aquarius and therefore allowed to say this! It’s called being self-aware.) As a sign that appreciates authenticity above all, just know that if an Aquarius catches you acting like you’re somebody else, they will call you a fool to your face.

As the final water sign and oldest sign in the zodiac, Pisces has the type of intuition that feels straight-up prophetic. When they’re not feeling completely tortured by the weight of their emotions, Pisces views life in abstract, non-linear terms. (If you’ve ever tried to schedule something with a Pisces, you know this unique pain well.) Pisces’ vision allows it to see the full potential of the titular “sk8r boi,” one beyond his baggy clothes and his preferred mode of transportation. “Too bad that you couldn't see / See the man that boy could be / There is more that meets the eye / I see the soul that is inside,” is classic Pisces thinking.

NEXT UP
Culture
Aly & AJ's "With Love From" Video Is A Postcard Of Melancholy
Culture
Heaven By Marc Jacobs Releases Ethereal Cocteau Twins Collaboration
Astrology
Your December 2022 Horoscope Fuels The Reboot
Ask A Witch
Ask A Witch: How To Survive The Holidays With Hoodoo Magic