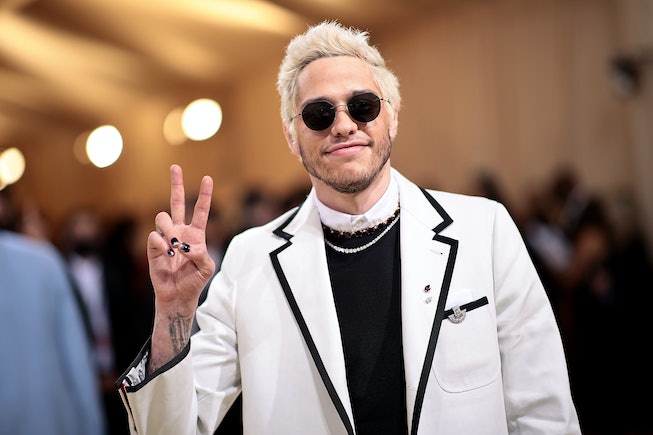 In between trolling Kanye West and developing yet another comedy series based on his life, Pete Davidson is planning to take a quick trip to space.

Kim Kardashian’s boyfriend will join the crew of Jeff Bezos’ next Blue Origin flight, set for March 23, in what is the company’s fourth human spaceflight. It’s safe to say that Davidson has milked being a celebrity for all its worth, from having the chance to date Ariana Grande and Kardashian to now leaving planet Earth. Pete is an “honorary guest” on the flight, so he doesn’t have to pay an undisclosed amount that likely totals hundreds of thousands, while all the other passengers will. I don’t know about you but if I paid $250 thousand dollars for a space flight and Pete Davidson was on it, I might ask for a refund.

Joining Pete will be fellow rich people including Party America CEO Marty Allen, philanthropist and real estate mogul Marc Hagle and his wife, Sharon Hagle, a University of North Carolina professor, and the president of Commercial Space Technologies. What do we think they’re going to talk about?

Davidson joins a motley crew of celebrities and rich people who have also been on Bezos’ flights, including Bezos and his brother, William Shatner and, for some reason, Good Morning America host Michael Strahan.

You can imagine how silly Davidson is going to behave in space, but luckily, Saturday Night Live already beat you to the punch. In an episode hosted by Elon Musk, the comedian played his recurring doofus character Chad, who goes to Mars on a SpaceX mission and is tasked with saving the lives of his fellow Mars colonizers. When Musk tells him he’s not going to survive the mission, he says “okay,” with his signature shrug.

All this is to say that the only celebrity I want to see going into space is Kim Cattrall, who in June, had rumors surface that she was going to be traveling to space aboard a NASA flight after photos of her looking chic in an astronaut suit surfaced on Twitter. Sadly, there are no plans for Cattrall to go to space. She did however attend NASA’s Space Camp in Huntsville, Alabama in 2013, where she picked up some astronaut skills.

Anyway, Pete’s spaceflight leaves at 8:30am on March 23. Let’s hope he can stop texting Kanye from his soon-to-be ex-wife’s bed and get up early enough to make it.