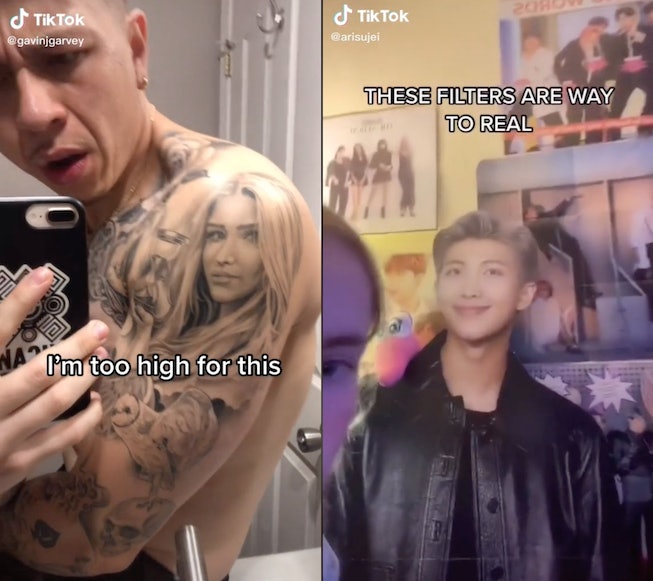 A TikTok filter that lets you animate photos is plunging TikTok users deeper into the uncanny valley than they’ve ever gone before.

The in-app filter, called “photo animation” gives physical characteristics to still images, like photographs, posters, or tattoos, making images of people smile or blink to appear life-ike. It’s that feeling you get when the eyes of a painting follow you as you walk, but approximately 100 million times creepier.

TikTok creator @gavinjgarvey used the filter on a tattoo of a woman, which immediately began blinking and demurely smiling. “I’m too high for this,” he wrote, succinctly expressing the sheer terror the filter induces. Turns out, the “photo animation” filter is still unsettling as hell even if you’re dead sober.

Deepfake-esque filters like this aren’t new. The MyHeritage Deep Nostalgia program and the Avatarify program, both of which also animate faces, took off on TikTok earlier this year. Last summer, TikTok added a policy combating deepfake tech, prohibiting “synthetic or manipulated content that misleads users by distorting the truth of events in a way that could cause harm.” This filter doesn’t seem to go that far, unless you count, um, feeling creeped out.

Now, some users are using the photo animation filter to bring back loved one who have passed, using it to animate their faces in old photos, a kind of emotional experience that’s straight out of a Twilight Zone episode.

But because it’s TikTok, you know there’s going to be at least some levity. Other creators have used it for less emotionally harrowing purposes, like animating celebrities’ faces on posters or magazine covers. Leave it to the robust Twilight community to make us laugh, like TikTok creator @mariellegreguski, who used the filter to animate Robert Pattinson’s face on a pair of Twilight underwear — the TwiHard community remains supreme!

The filter works on anything with a face, so action figures and dolls can come alive, too, if you’re into that sort of thing. You can even use it on your own reflection in the mirror to see a second, inhuman version of yourself trapped behind the glass. Anyone who has ever wanted to play out a fantasy from the Jordan Peele thriller, Us, the time is now! Horror movie screenwriters and A24 executives only need to head to their FYP pages to get inspired for their next freaky venture.