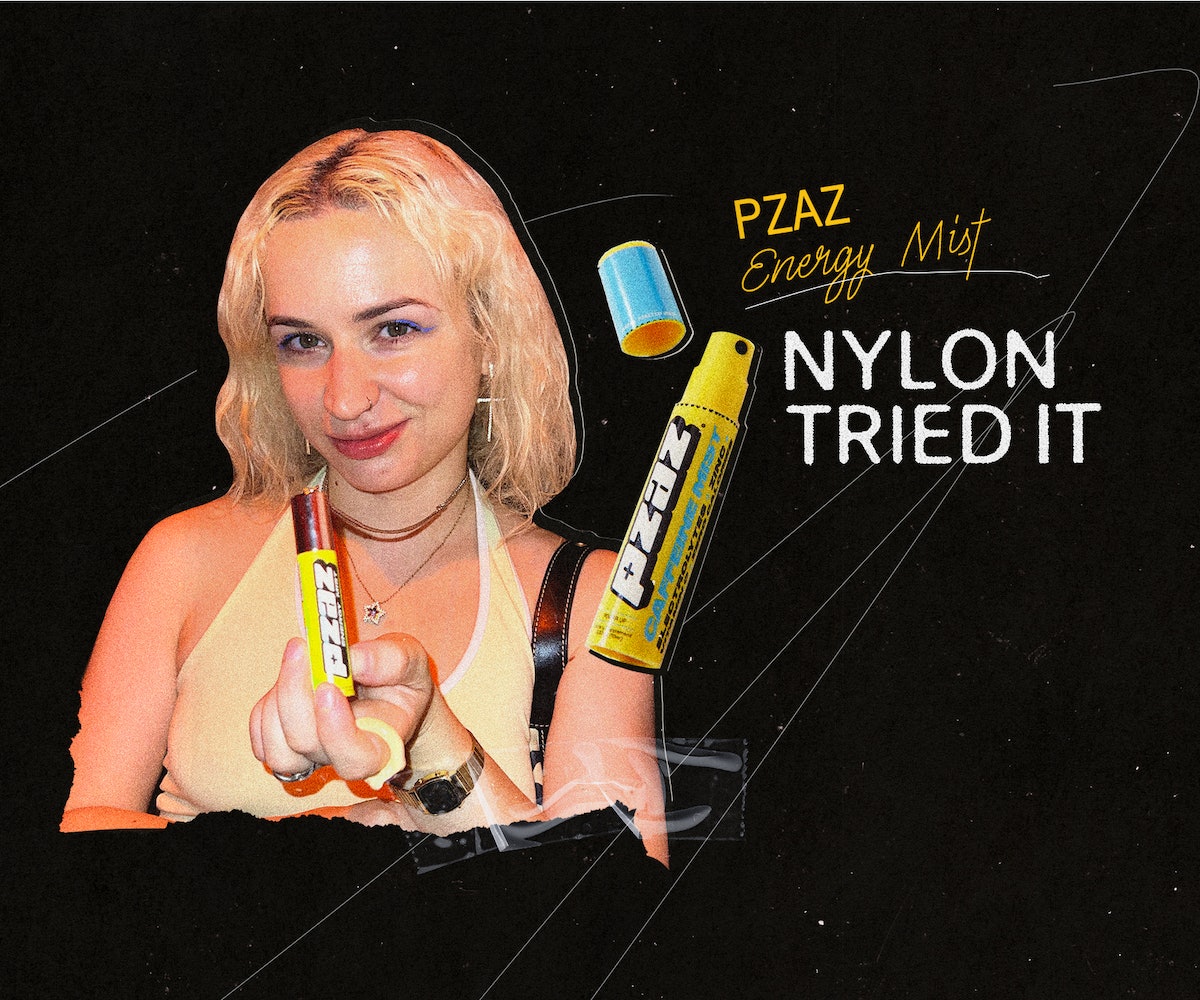 Partying has been back for a year now, and with it, all types of pro-party coverage, from intrepid reporting and the nightlife novel.

Every zeitgeist needs an accessory, and we’ve never been short on accessories for partying. Whether it’s the LED gummy rings of ravers, the poppers of first gay and now straight communities alike, or glitter for, well, anyone who’s fun, accessorizing partying has always been just as crucial as rave flyers or key bumps. Energy drinks, too, have a sanctified place in nightlife, whether it’s Red Bull, gentrified Red Bull (White Label Yerba Mate with a float of tequila) or, sure, even the espresso martini.

Now, there’s a new accessory to keep us caffeinated as nights crawl into sunrise. Pzaz is an “energy mist,” that comes in a taxi cab-colored tube in four flavors: Peach Bomb, Juicy Strawberry, Sour Apple, and Peppermint Ice, Y2K fonts abounding. Five spritzes of Pzaz will get you about the amount of caffeine as a quarter of an espresso, and an entire bottle has less caffeine than most coffee drinks, energy drinks, or energy shots, though you shouldn’t consume more than two tubes per day.

Not that you would be tempted to. For all the fun Pzaz promises, it tastes like your own backwash after eating a sleeve of sour straws. I could barely stomach five spritzes while I squirted it with glee into my mouth around midnight before getting in a cab to a James Murphy set at Good Room. Earlier in the night, my friend texted me that she was going to take a caffeine pill, which she always does when we go out. “You don’t need to do that,” I quickly texted back. “We have Pzaz now.”

Despite the taste, Pzaz promised me so much that I dutifully carried four flavors with me, even accessorizing with the product, which nestled into a silver chain the company sent over with the set of mists. “You look like you’re going to a rave,” my roommate said when she saw me, which wasn’t exactly a compliment. “I had to dress to match the Pzaz,” I shrugged.

The thing about Pzaz is that it’s trying to pander to me in too many ways. It reminds me of the unbridled joy I had upon first opening a box from Glossier, its packaging conspiratorially greeting me: “Skin Is In,” with a lightning bolt replacing the “I.” You get the feeling that no matter how much you like the product, you are, in fact, a sucker.

I feel similarly with Pzaz, which is so clearly trying to toe the line between the minimalist ingredients it thinks its consumers want, and the garish aesthetic of ornamental irony that’s become dominant over the last two years. Simply put, it should taste how it looks: artificial, sweet, fun, stupid, like sour candy. Instead, it prides itself on it being “zero-calorie,” with “natural caffeine,” and “exquisite flavors.” I’m holding a plastic tube (which is “plastic negative,” to be fair) that’s designed to be my generation’s answer to a Five Hour Energy; I don’t need it to taste like Goop’s answer to an energy drink.

I wanted to like Pzaz so much because it’s everything partying should be: silly, inconsequential, ornamental, ironic, and zazy — to borrow a favorite marketing word of theirs. But reading about the origin of the company, which was started by Jonah Reider, best known as New York’s dorm chef with his supper club Pitch, and later, the very good Pith Home Goods, I can’t help but feel a little bummed about just how hard he tried to make a product that would sell.

“I started the company because I wanted to create a consumable product that would thrive at the places where I most frequently shop,” Reider says in a press release. “After visiting hundreds of convenience stores and speaking to thousands of their customers, I became obsessed with the uncompetitive, gross, unsafe, and unappealing world of energy shots. I developed Pzaz with a team of experts who share my interest in revitalizing a dead retail category and redefining what it means to be energized.”

I’m not a neophyte: I know that companies need to sell things that people want to buy. It makes sense that tiny, consumable luxuries would be recession-proof. But I don’t know if the energy drink market needed a Y2K-injection in branding, but not in taste. I’m not even sure energy drinks were broken in the first place.

That’s not to say Pzaz doesn’t work. It does. I continued the spritz Peach Bomb into my mouth (the most tolerable of the flavors) for the better part of the night. Maybe it’s due to the plant-based caffeine sources, but I felt awake in my body, and sleepy in my brain, which is exactly how you want to feel when you just overheard the third man of the night refer to James Murphy as “a god.” My friend and I took Cobrasnake-style flash photos in the bathroom as a joke, only to see that Cobrasnake did in fact photograph the Pzaz launch party.

The irony is not lost on me that I just wrote upwards of 1000 words on an “energy mist,” that I ultimately just think its creators should take less seriously. In the grand scheme of everything, an energy mist is so innocuous that I’ll still carry it around all summer. After all, you can never have too many party accessories.

Pzaz launched June 1 and is available on pzaz.com and in hundreds of convenience stores throughout New York City.