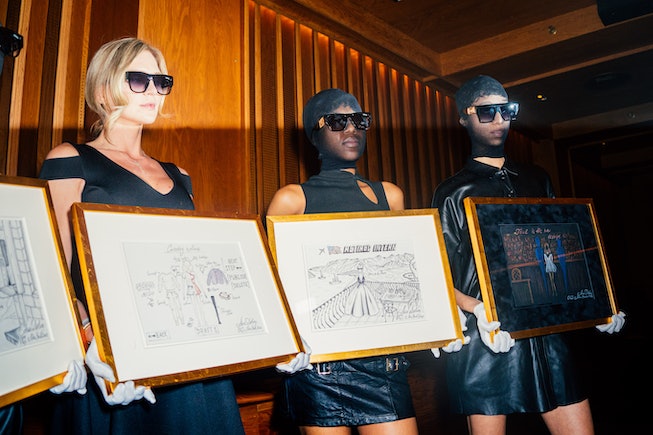 “I don’t want to say the ‘s’ word but it feels like we got scammed,” a reporter whispers to me while sipping on the cocktail of the night — an “Anna on Ice,” to pay homage to why the disgraced fake heiress was not in attendance at her own art show: She’s currently in an ICE detention facility in Orange County. The drink was not, in fact, served on ice, but in a champagne flute. We had been at Delvey’s art show at the Public Hotel for an hour, and had yet to see a single piece of art.

“Maybe the whole thing is art?” I muse. “She has the same PR people as Weinstein,” another reporter pipes in, whispering the director’s name. “They know what they’re doing.” From the start, it’s clear this isn’t going to be your standard Thursday gallery opening.

A week earlier, I received an email from Delvey’s new public relations firm updating me on her life “... Anna is currently self-sequestering in an ICE detention facility — the moment she leaves the facility, ICE will deport her to Germany. Because of her felony charge, she will be banned from re-entering the United States for at least 10 years. Anna is now appealing her criminal charge and the ICE deportation order,” the email read. “Additionally, I'd like to invite you to Anna's art show, next Thursday, May 19th.” There was no indication of where the show was, or what the art looked like, let alone its medium.

At a typical gallery opening, you stay for 20 minutes, fish a lukewarm Modelo out of a bucket of melting ice, and discard your pamphlet on the way out. At Delvey’s art show, there was a line to enter. The doors were illuminated by the flash of a photographer taking photos of two models. I showed my ID and a bouncer stamped my hand before ushering me into a dimly-lit cocktail party where Playboi Carti blasts from the speakers and servers walk around with trays full of champagne, which I immediately accept. “Welcome to Anna Delvey’s art show,” a sportscaster-like voice booms over the PA. I weave my way through models and dodge photographers’ flashes while chatting with other confused reporters from virtually every entertainment outlet in New York City. Everyone eyes each other, hoping someone can share information nobody had. Because there’s one crucial element missing: the art.

“I feel on edge, like I’m waiting for something bad to happen,” I confess to a girl I’d just met, who replies: “Yeah, like, are we getting scammed right now?”

A photographer who had just arrived from shooting in Ukraine said he heard a rumor that models are going to walk around displaying the art. “Ukraine? That’s a different kind of battlefield,” another reporter says, deadly serious. I order another drink.

Over the loudspeaker, we hear quotes from Netflix’s Inventing Anna, most pointedly a voice yelling: “You look poor!” Then a dancer, presumably dressed to resemble Delvey, launches into a dance to a mashup of Britney Spears’ “I’m A Slave 4 U” and Mariahlynn’s “Once Upson a Time.” I clock her costume, which includes Delvey’s signature black-rimmed glasses, a blazer, a jeweled corset belt, black mini skirt, and diamond-encrusted stilettos. “This is a fever dream,” I say out loud, to nobody.

Then, around 8:30, we hear from Anna for the first time. “Hi everyone, it’s Anna Delvey here. I hope you guys are enjoying your evening so far,” her voice booms from a loudspeaker. “I’m excited to unveil my first collection ever, titled Allegedly.” (This got an audible laugh.) “I wanted to capture some of the moments in the past year, both never seen before and iconic, using the limited tools I have at my disposal,” she says. “You’ve heard so many voices already, but this is the beginning of me telling my story, my narrative from my perspective.”

Moments later, everyone turns to large, curtain-lined doors at the other end of the room. We’re asked to clear a pathway. The doors open, and one by one, models wearing Versace sunglasses, mesh face coverings, and white gloves walk down the makeshift runway carrying Delvey’s framed drawings while Kanye West’s “Flashing Lights” blares from the speakers. I’ve never seen so many camera phones go up faster. I’m having the time of my life.

“OK, I’m slowly becoming an Anna stan,” the same reporter who earlier had called her a scammer tells me while we’re pressed up against five other people craning to film the models.

This goes on for about 15 minutes, after which we head upstairs for “part two” of the evening. There’s a mad dash rush in the hallway to get into the elevators. A girl in sweatpants carrying a takeout container asks me what was going on. “I’m just trying to get to my room,” she says.

I chat with two unfriendly art people, one of whom is holding a Frieze catalog as we waited to be corralled into the elevator by bouncers checking everyone’s hand stamp. “I thought you were Julia Garner when I first saw you,” another reporter tells me. Garner, who played Delvey in Inventing Anna, was not in attendance, but we both do have blonde hair. “Can I take a picture with you to send to my husband?”

Upstairs, the art is displayed, auction-style, on tables lining the carpeted room. There is another bar, and even more servers carrying trays of champagne flutes. I ask a guy who looks like he has some authority if he had anything to do with organizing the show. “I’m a venture capitalist,” he says, as if that answered my question.

There are QR codes next to the drawings, which direct you to a website to buy prints of Anna’s work, which are mostly crude, surrealist, satirical drawings of moments from her life, or aspects of her persona and reputation. “She’s really funny, huh?” someone says to me while we’re looking at a piece of art that’s a drawing of a newspaper, titled “The Delvey Crimes,” with the headline “Threat to Public Safety Back in Custody,” and shows Anna lounging on a daybed in a Dior dress. “We are selling up to 48% ownership in the Anna Delvey ‘Allegedly’ Original Collection to strategic investors.” The site values the 21-piece collection at $500,000.

Around 9:30, Delvey’s Orange County ICE facility mugshot pops up on screen, along with her booking number and booking date. There are technical difficulties while trying to call her, which only adds to the suspense and spectacle, the most alluring parts of the night, and of Delvey herself. While we’re waiting, a middle-aged man in a suit makes an announcement. “All this incredible art she’s done! Her talent is dripping all over this room! I just want to thank you so much for being here,” he says, before raising his fist in the air and chanting: “Free Anna, free Anna, free Anna!” In front of me, an influencer in a purposefully tattered sweatshirt yells, “F*ck yeah!”

Then comes the moment we’ve been waiting for all night: Anna herself. “I haven’t seen this many people at an art opening since Andy Warhol,” the voice conducting the interview says over a loudspeaker, which gets a big laugh. I have to admit I’m a little starstruck when I see Delvey on screen, wearing an orange jumpsuit and her black glasses, with the background of the ICE facility blurred behind her.

Delvey talks about her art, introduces us to one of her friends in ICE, and beams while everyone cheers for her. “They just have the worst of everything [in jail]. We only have a security pencil which is, like, so bad, like it's impossible to sharpen,” she says, explaining that someone bought her colored pencils and paper from Amazon and that’s all the supplies she had. And of course she doesn’t miss a chance to pitch her long-con: “The Anna Delvey Foundation will definitely be realized, just not in the same form.”

“Anna, the New York Times wants to see your outfit,” the interviewer says. She gets up and strikes a pose, hand on her hip.

Afterwards, there’s an after-party on the roof. Whoever is left from the show mixes with the crowd already at the bar upstairs, and we all stand in awe at the view, and at the night, wondering what could happen next. I don’t know if I can handle any more surprises. I leave feeling endeared to Delvey. It's too easy to write that that’s her ultimate con, but it’s also the thing that makes the most sense. Her whole con wasn’t, in the end, getting money. It was getting people to like her.

NEXT UP
Culture
Caroline Polachek In KNWLS & More Party Photos You Missed
Culture
On The List (With Melissa Rich): How To Throw The Ultimate Apartment Party
Culture
The 2023 Oscar Nominations Full List Is Here
Culture
Marie Faustin Loves To Waste Men’s Time
Style + Culture, delivered straight to your inbox.