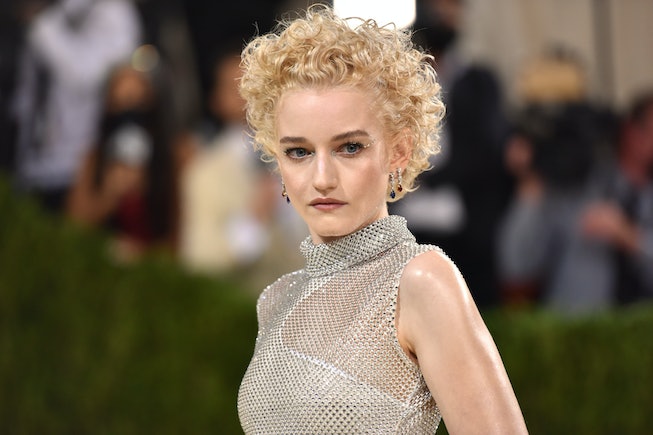 Inventing Anna, the highly-anticipated 10-episode Netflix series about everyone’s favorite grifter Anna Delvey — who swindled her friends and financial institutions out of hundreds of thousands of dollars between 2013 and 2017 — is out next month, and we’re getting a first look at the extensive preparation its star Julia Garner underwent for the role.

In an interview with Town & Country, Garner says that when she went to visit Delvey in prison, Delvey wanted to make sure the accent the accent Garner used to play her was perfect. (Something that Patrizia Gucci probably should have done for Lady Gaga in House of Gucci.)

“She’s like, ‘Please, let me hear it,’ ” Garner told Town and Country, adding that she started repeating everything Delvey said in the accent. “It got very meta.”

Delvey’s accent is a culmination of her various identities: She was born in Germany, but learned British English and then American English by watching shows like Gossip Girl, the article notes. Garner said Delvey’s accent was, “the hardest accent I’ll ever do,” which was made particularly more difficult by the fact that Garner was filming Ozark at a same time where she plays Ruth Langmore, who has a Southern accent.

“I really made sure that the script supervisor had an eye on my accent during that period of time,” Garner said. “Playing those two parts at the same time was probably the hardest thing I’ve had to do in my life. Those are not easy women.”

Garner worked with a dialogue coach to perfect the Delvey accent as well as watched interviews with the grifter, where she learned to pick up her mannerisms, such as tucking her hair into her coat with two strands loose in the front. She also listened to a ton of rap, including Delvey’s favorite song Eminem’s “Lose Yourself,” which may be too on the nose even for her. Garner says she became so enmeshed in Delvey that she started taking on her anxiety and even sleep-talking in the accent, a kind of all-consuming preparation not unlike the kind of prep Gaga did to portray Gucci, which included speaking in an Italian accent for 18 months.

“My anxiety was through the roof, and I realized it was because Anna had really bad anxiety,” Garner said in the interview. “My husband was like, ‘This has gotten out of control.’ ”

After the first trailer of Inventing Anna was released, confused fans took to Twitter to speculate about Garner’s accent — which, if you’re unprepared for it — does sound comical. But that’s kind of the point.

It’s unclear whether people are aware of Delvey’s mosaic of an accent, or if they just thought Garner butchered it. Either way, it’s one of the many things we’re looking forward to seeing in Inventing Anna.