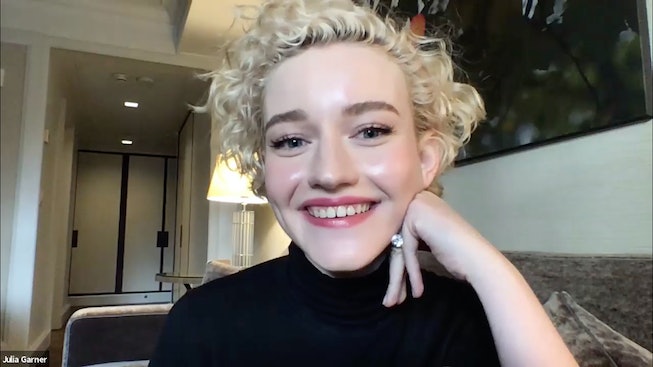 Filming is officially underway on the upcoming Netflix miniseries, Inventing Anna, which follows the life of Anna Delvey (real name Anna Sorokin), a con artist that climbed her way to the top after claiming she was a German heiress. It’s been nearly two years since news broke that Netflix, along with Shonda Rhimes, would be creating the series, and now, Inventing Anna star, Julia Garner is opening up about her new role.

Speaking with the Wall Street Journal, Garner revealed that she had visited Sorokin in jail, a decision which she believed was vital for the role. “You can’t dislike the person you’re playing for eight, nine months,” she said. “That’s going to come across on the screen, and the performance isn’t going to be as good. She had her reasons why she did all the things she did.”

Reflecting on her visit with Sorokin, Garner admitted that a few elements of Sorokin's personality were unexpected. “Anna in real life … she’s really funny. She’s actually hysterical. And she’s super soft-spoken and gentle, which I was really surprised about. Going into any part, you can’t have too many negative thoughts because you don’t want to start with the character judging them,” she said.

There’s no word yet on a release date for Inventing Anna, but a current Netflix description of the series notes that it will follow a journalist investigating the case of Delvey. Other big names are expected to appear in the series, including Anna Chlumsky, who will portray the journalist, Laverne Cox, and Jennifer Espositio.

As NYLON previously reported, journalist Jessica Pressler broke the story on Sorokin in 2018. Published on The Cut, “How Anna Delvey Tricked New York’s Party People,” quickly went viral. Scamming her friends out of hundreds of thousands of dollars, Sorkin was found guilty of attempted grand larceny in 2019, CNN reported. She was sentenced to serve four to twelve years in prison, but back in October, she was granted parole, Deadline reports. It’s expected that she could be released in February 2021.