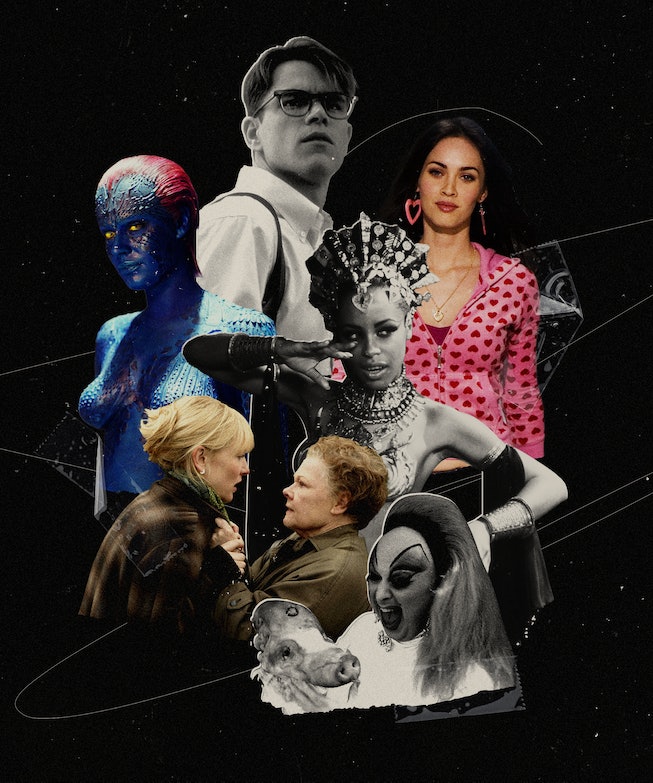 With expanding visibility for the LGBTQ+ community comes the inevitable codification of our culture, language, and imagination. Patting themselves on the backs for their inclusivity, Oscar voters have long embraced the dreariest of stories, featuring straight actors playing gay characters who tend to expire rather horribly. But how many of these gay-friendly films are really friendly to gays?

While the straight establishment praises punishing death-march movies like The Imitation Game, Philadelphia, or The Danish Girl, actual queers seek respite, resonance, and the occasional rapture in a more thematic constellation of cinematic archetypes. The genres we flock to don’t necessarily feature explicitly LGBTQ+ narratives, but they do offer fantasies of a world beyond the confines of mundane mediocrity, in which femmes, butches, mutants, and vampires can claim their moments, and leave everyone gagging. Here’s how we categorize the performances too big, the looks too outrageous, and the stories too fabulous to ever be considered straight.

Who needs a sad shaky-cam period piece about forbidden love when you can watch embodied queer women get rich and blow shit up? These outlaws begin as prisoners of a crisscrossed closet that binds gender, class, and sexual freedom to the whims of patriarchal authority. The coming is explosive, tragic, and worth every bullet. Get in the hot rod and kiss your partner in crime: There’s no going back.

Gay Love (And No One Dies!)

Sometimes, one wants to enjoy the sight of beautiful people making out — without a doomsday clock to imprisonment, exile, death, and dismemberment. Imagine! Not that these sagas are without heartbreak, so to speak, but there’s at least the possibility of optimism for its lovers, be they boarding school boys in Maurice or the closeted boys of Moonlight’s projects.

In the confines of the closet, you may find yourself crushing hard on your straight friends, who can’t help but enjoy the extra affection. Sometimes, what can’t be a real relationship becomes something more: a warped, artificial siblinghood, as in Single White Female and The Talented Mr. Ripley; or the Lestat and Louis vampirism of Notes on a Scandal. These rejects, ever unreciprocated and underappreciated, deserve love just like anyone else. Take rapture in the extreme ways they go to get it, and exorcise your old relationship demons as you learn from their examples.

For Drag, By Drag

Though we are still waiting for Guy Pearce, Hugo Weaving and Terence Stamp to receive their retroactive statues for The Adventures of Priscilla, Queen of the Desert, credit must be paid to the full-time drag darlings who brought their talents to the silver screen in low-budget showcases not fit for mass consumption. Divine’s legacy lives forever in the John Waters oeuvre, and the vision of Doris Fish and her cadre of San Francisco queens remains untouched and uncorrupted in 1991’s camp masterpiece Vegas in Space.

Sequels Made Better With A New Actress

After the masses have devoured the first film, producers often take bigger swings for the second entry, involving camp character actresses and wild plot swings. Here, some of the all-time greats can really go to town, riding a franchise all the way off the rails. An already-strong series is often made better with the addition of a grand vamp, be it Joan Cusack in Addams Family Values, Parker Posey in Scream 3 and Blade: Trinity, or, most essentially, Michelle Pfeiffer, who ripped through Grease 2, Batman Returns, Ant-Man and The Wasp, and Maleficent: Mistress of Evil like their first entries never existed.

When it comes to the big climax, we’re not looking for an explosion or an orgasm, so much as a revelation: the spectacle of our femme protagonist, fully manifest, crushing those who doubted her. This is the exit from the closet, in slow motion and formalwear, as Brandy’s Cinderella descends the steps and Megan Fox stomps the hallway in Jennifer’s Body. She is reborn in the fire, like Gina Gershon, literally erupting from a volcano in Showgirls; Angela Bassett setting her husband’s whip ablaze in Waiting to Exhale; and Aaliyah turning up at the club and incinerating her haters for delicious vengeance in Queen of the Damned. It’s your moment. Why not take your time?

Satire (But Make It Fashion)

Dress your commentary about capitalism, patriarchy, and the culture wars in a Chanel suit, and it will fly right over the masses’ heads. While men celebrate the literalistic, boring processes of their method-acting icons, the actresses of the age handle the real subtleties, rarely getting credit for winking through the subtext. As with just about any Kirsten Dunst performance, Dick builds a political thriller off of a knowing smile; but in the case of Rosemary’s Baby, Mia Farrow shrieks to the bourgeois panic of her generation.

From our childhood bedrooms in suburban purgatory, we watched as our favorite cosmopolitan women let loose in all manner of fictional soirees, parties, and after-parties. In All About Eve, Bette Davis proves that there’s no point in spilling tea if you’re not dressed to the nines and sipping a cocktail, while MVP Cameron Diaz, in Charlie’s Angels and The Sweetest Thing, rules the club in low-rise leathers and a crop top. And yes, the bouncer knows her by name!

Mutants And Crossbreeds, At The Rave

Yes, everyone fancies themselves the weirdo outcast who doesn’t get asked to the prom. But for those of us who really want out of the dominant social order, it’s in sci-fi’s alternate species that we find an appealing post-binary lifestyle. Besides, these freaks know how to have a good time, as evinced by the vampires of The Lost Boys, Blade, and Underworld, or the crones and cross-dressers of The Witches. Once you’ve given up on trying to fit in, embrace your superiority with a bitchy panache, like Ian McKellen and Rebecca Romijn in X2: X-Men United.

NEXT UP
Culture
Phoebe Dynevor Will Not Return for Bridgerton Season 3
Culture
Succession Season 4 Trailer Explodes With Family Drama
Culture
Loewe’s Howl's Moving Castle Collection Is An Anime Dream
Culture
The Madonna Biopic Is Being Scrapped
Style + Culture, delivered straight to your inbox.