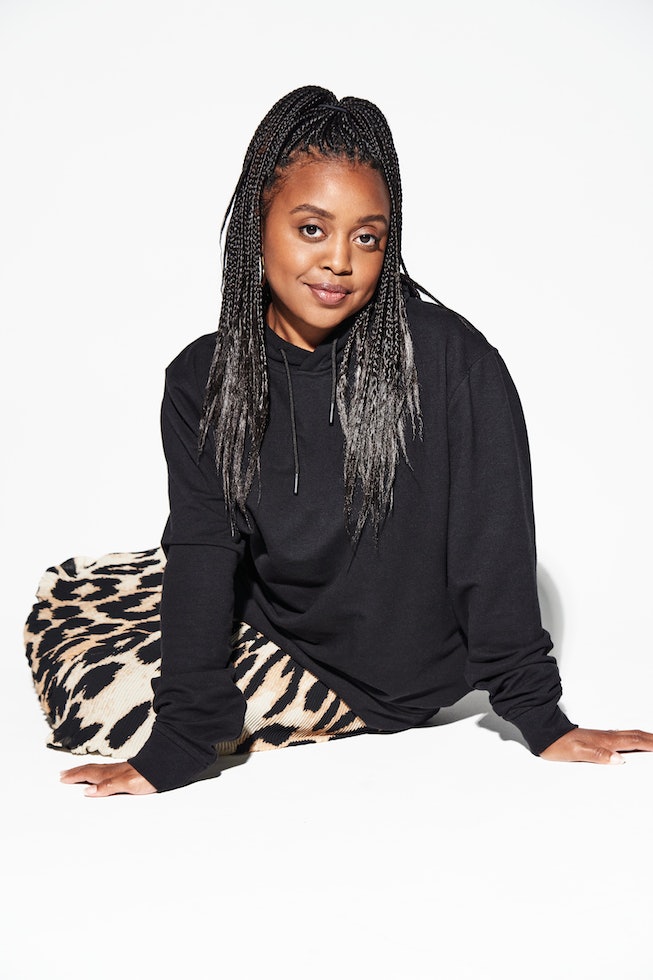 Quinta Brunson followed her mother’s footsteps in becoming an elementary school teacher in her own way — by creating and starring in Abbott Elementary. The mockumentary sitcom follows a group of deeply underfunded, incredibly passionate teachers at a Philadelphia public school as they make ends meet and do God’s work in shaping young minds; it also happens to be one of the funniest shows on television, and a record-breaking one at that.

In Los Angeles, Brunson is in the early stages of the Season 2 writer’s room, and plans to start shooting Abbott Elementary’s highly anticipated sophomore season this July. And while the team is cooking up more laugh out loud and touching stories of teachers, Brunson is doing her part in helping IRL teachers around the country.

Brunson’s appreciation for teachers runs deep, which makes sense for a show named after the actor’s real-life sixth grade teacher. Now, for Teacher Appreciation Month, Brunson is teaming up with Box Tops to help fund schools and give educators the support and respect they need as they fight the good fight.

Below, Brunson gives the lowdown on Abbott Elementary, working with the inimitable Janelle James, and how you can make a difference in the classroom with her partnership with Box Tops.

What can we expect for Season 2? What can you tell us?

I think you could probably expect more laughs, of course. Goal is to keep it funny, but also, more nuanced stories about teacher life. We really prided ourselves, in the first season, on telling unexpected stories about teachers, and not just the typical picture day. Even if we did approach the typical story, it was finding a different way to approach it. That really gave a little bit more of an inside look on teacher life. More of that, I'm so excited with what we're already planning to start out with. I don't know. I get really excited by going into the more nuanced spaces.

I know your mom is a teacher and that Abbott Elementary was in part inspired by her experiences. What are her thoughts on the show?

She loves it. She really enjoys it. She gives what I think is the best compliment, which is that she would watch it even if I wasn't in it, and didn't make it. I think that's the biggest compliment I could get from her.

Your character, Janine Teagues, is obviously fictional. That being said, I’m curious how much overlap you feel you share with her?

Not that much, I think we carry two different kinds of ambition. If anything, I feel more like a Barbara/Ava hybrid. I do think Janine the character is way more naive than me, and not in a bad way. She has a lot to learn. I think she's more optimistic than I am, which is also not a bad thing at all, but I think that's what's cool about playing her. She does feel vastly different than me. I think she's more peppy, more excited.

Speaking of Ava, honestly, the way that she would make me laugh out loud. Janelle James is so funny. What is it like being on set with her?

Incredible. Her line delivery makes me laugh out loud. We do a lot of modifications to her lines on the spot, and we often get the written thing, and come up with something else on set. It's fun watching her say something new, that I didn't see on a table read. She's hilarious, and was born to do this role. It's one of those people where, if she didn't audition, I don't know what we would've done. I'm 100 percent sure the show would not have been the same, because when she auditioned, I was like, "Yep. End of story. The role was made for you." We were having a little trouble finding someone who got it the way she did, and she got it immediately. Got who the person was, and knew where the funny was in the character.

Something that I really enjoyed about the show, in the interpersonal dynamics, was the character of Tariq. He isn't this typical, quintessential bad guy. He has a lot of growing up to do, but he's not a horrible person. You still want Janine to break up with him, but you understand why their relationship has stayed on for as long as it did. What was the process when you were ideating his character?

Exactly the stuff you just talked about, which was, we knew that we wanted to show these characters that were more growing apart from each other than either of them were bad people. I think, with some of the bad boyfriend tropes of the past, it was like, "You got to get them out of there." You know that they're bad for your protagonists, or whatever, but I think there's a little bit more nuance to people than that. That's something that we believe to be true with all of our characters, that everyone possesses the ability to be both right and wrong, good and bad, and exhibit growth. We thought that to be true, even for Tariq. We really thought it was important, with these young characters, to not show it being sour and awful, in a crash and burn breakup. But, to show that you cannot outgrow someone, and that's perfectly okay. We knew in order to do that, his character had to be funny. We needed him to be likable, and even in their breakup, or their break, for him to still be well liked by the audience.

We wrote that character as such, and we were really fortunate, once again, it's similar to the Janelle situation, that Zack Fox auditioned. I'm good friends with him, but I didn't know if he wanted to do that role. He did, and I don't know who else would've been able to pull it off, because he got the key thing about him, which is that he's kind of a doofus, but not a bad guy.

This goes without saying: You love and appreciate teachers. I want to talk to you about your partnerships with Box Tops. How did you get involved, and what are you hoping to achieve?

I'm so excited about this Box Tops partnership. When I was approached with it, it really felt like a no-brainer, because Box Tops were such a big part of my childhood. I have such fond memories of them being a part of something to do with my mom, and something to do with my teachers, and working toward a common goal. After learning a bit more about their mission, which is, ultimately, to support a child's education, believing that it's the foundation to achieving their fullest potential. That made sense to me, and felt like yet another way I could show my appreciation for teachers, which has been important to me before Abbot, but since we're making the show about Abbot, I find it even more important, making an effort to appreciate teachers more and more each day.

During teacher's appreciation month, I really wanted to do something special, but something that involved other people. While I'm getting to donate $20,000 in Box Tops with them, to my middle school, Andrew Hamilton Elementary School, everyone has the ability to make a donation. If they make a General Mills purchase, they can download the Box Tops education app, and enter a referral code, which is, "Teachers make us better," during their registration. They can earn $5 for a school of their choice, which, $5 may not seem like a lot, but when that's coming from a bunch of different people, that can really help a school out. I thought that was such a fun, cool, easy way to get involved with this legacy effort that has been around for the past 25 years. It really felt like a no-brainer, and I'm so excited about doing it.

It's been a minute since I thought about Box Tops, but they were very integral at my school, as well. And $5? That's a pack of markers. That goes a long way.