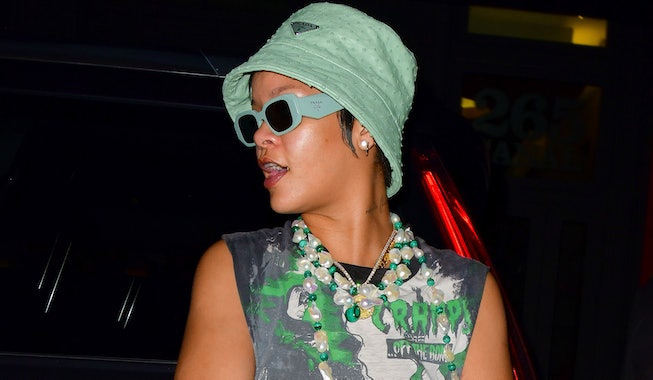 I’ve said it before and I’ll say it again: Rihanna is the premiere multi-hyphenate of our time. She’s created what is the only necessary celebrity makeup and beauty line, a lingerie collection that routinely includes the most avant-garde runway shows, calls one of the prettiest men alive her boyfriend, and as if that wasn’t enough, still manages to be one of the best pop stars out there. Her legions of fans, often referred to as the Navy, have learned to respect that time moves differently when you’re Rihanna. It doesn’t matter that it’s been over five painful years since the release of her opus Anti. You will get new Rihanna music when it is given to you! And that’s final!

Rihanna’s glacial pace when it comes to releasing new music has become its own meme. Which will come first, Fenty Healthcare, or a new album? Although Rihanna has famously opted for a troll-forward initiative when it comes to inquisitive fans online, the singer finally handed over a morsel of new information regarding her highly-anticipated new album while promoting the her latest Savage X Fenty show. (This bad gal stays working!)

“You’re not gonna expect what you hear. Just put that in your mind,” she told AP. “Whatever you know of Rihanna is not going to be what you hear. I’m really experimenting. And music is like fashion, you should be able to play. I should be able to wear whatever I want, and I treat music the same way. So I’m having fun and it’s gonna be completely different. That’s it.”

Longtime Rihanna scholars know that R9 was initially promised to have a reggae influences, but at this point, we really have no idea what Rihanna is cooking up in the Fenty lab, only that whenever it does come out, it’s going to be fun as hell.