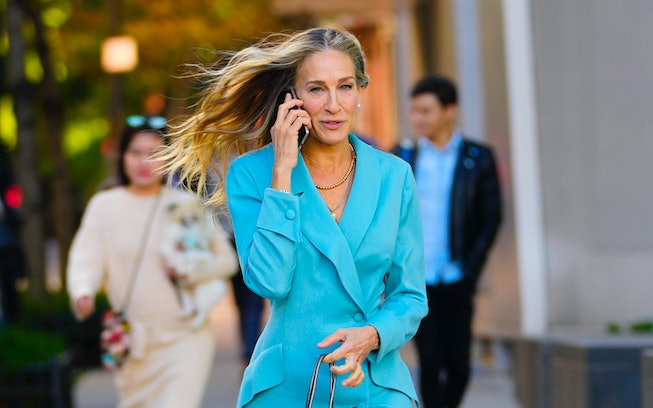 Sarah Jessica Parker’s most notable celebrity side biz has always been in tandem with her most infamous character Carrie Bradshaw’s: her Bloomingdale’s shoe brand SJP. Now, she’s getting in touch with Carrie’s literary aspirations as she announces the launch of her own publishing imprint this week.

In partnership with independent publisher Zando, SJP will publish four to six books over a three-year span, and is planning to be “heavily involved” in the publishing process, from cover design to marketing (à la posting on Instagram for her 7.9 million followers). Zando seems to be the new go-to for celebs wanting to dip their well-manicured toes into the lit world pool: It also has deals with Lena Waithe, John Legend and Gillian Flynn.

Parker is certainly going to give Reese Witherspoon — the current reigning A-lister who famously likes to read — a run for her money. But this isn’t actually SJP’s first foray into the lit world. She used to have an imprint with Hogarth, where she published Fatima Farheen Mirza’s novel A Place for Us in 2018, about an Indian Muslim family navigating life in California. Now that And Just Like That, the awful, yet perfect Sex and the City reboot has ended, SJP can get back to having a series of lucrative side hustles.

“It is with tremendous pride and delight that I announce the launch of my new imprint, SJP Lit. I make no secret of my devotion to books, the necessary role they play in my life and my endless admiration for authors and storytellers,” SJP said in a statement. “So it’s simply a dream come true to have the opportunity to participate again in the discovery and support of extraordinary new voices. I feel especially fortunate to take part in the process of helping readers uncover their new favorite books and authors, a task I don’t take lightly and will tend to fiercely.”

We can surmise that “I make no secret of my devotion to books” refers to SJP’s wild, cryptic Instagram, which is just as filled with videos of her filming rabbits on the first day of the month with the caption “rabbit, rabbit” as it is with glossy hardcovers of books she’s reading — because we all know, if you read a book and don’t post about it on Instagram, it doesn’t count.