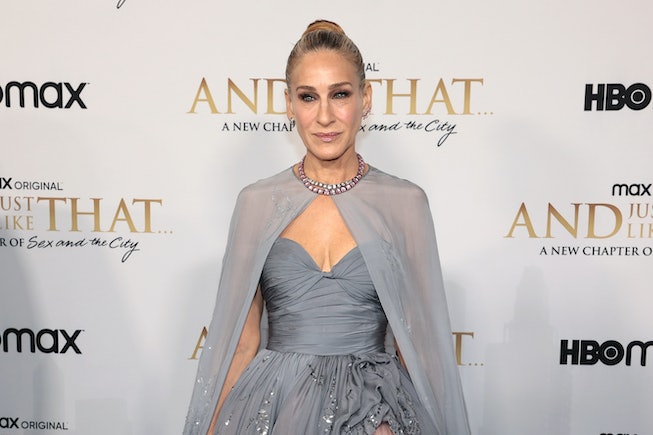 Welcome to That One Time... a NYLON series spotlighting culture’s funniest, most slept-on moments.

Sarah Jessica Parker fancies herself the queen of New York City. She posts videos on Instagram of her on subway platforms, of the Empire State building, or in locales near her Midtown shoe store. These are somewhat standard fare for a celebrity to post on Instagram — but there’s something about when SJP posts them that feels wildly off base.

Maybe it’s the captions, where she waxes poetic, writing vague haiku-like stanzas that sound like a beatnik: “Subway station NYC. / Always something to occupy the eye when waiting for your train./ X, sj” she writes next to a photo of a mosaic. She captioned a bouquet of flowers with: “Never have I ever./ Peonies in various shades of faded blue./ They are as fragrant as they are otherworldly./ X,SJ.” My personal favorite is a photo of a dirty penny on the ground, which she captioned: “2 times today./ But I left them there for you./ Thompson St. Just north of Houston./ X,SJ.”

But nothing is so mesmerizingly cryptic and deranged as her most-used caption: “Rabbit Rabbit,” which she posts, by a cursory count, at least once a month. Sometimes the caption is accompanied by a video of some kind of rabbit, whether it be a drawing of a rabbit on some dishware or an olde time illustration. Sometimes there are no rabbits in sight at all. Sometimes she posts “rabbit rabbit” next to a photo of light coming in through a window or a video of a pile of leaves, or whatever this tin shed is. Last month, she posted maybe the most unhinged video of all — where she revealed a series of Post-It notes where she scribbled “rabbit rabbit,” with the same intensity that that kid in The Shining wrote “REDRUM” on the mirror.

As I sat there scrolling through Sarah Jessica Parker’s Instagram, I couldn’t help but wonder...what is she talking about?

There’s nothing I love more than a celebrity with an off-center presence on an app that demands perfection. So the first time I opened SJP’s wild and precious Instagram, I knew I was in for a treat. The first thing I saw was her avatar photo, which is a blurry close-up photo of her eyeball, her lashes thick with mascara. SJP’s lack of a firm grasp of the platform is enchanting, but what really keeps me coming back is how accidentally wild it is.

The whole reason why following celebrities on Instagram is fun is because it offers a sense of sincerity, a sneak peek into their lives that they — not paparazzi — control. But the best celebrity Instagram accounts, like Ariana Grande, are the best because there’s a sense of exclusivity, whereas accounts like Taylor Swift’s feel like they’re only there for self-promo. SJP’s falls somewhere in the middle: She does a good job with self promo especially with the (cursed) release of And Just Like That. But whereas Grande knows she’s good at Instagram, SJP doesn’t appear to have any strategy other than what she earnestly feels — whether that’s her delight at a friendly bird or a mediocre-looking milkshake, and I can’t get enough of it.

But as it turns out, “rabbit, rabbit” does have its roots in something. It’s a phrase I’m confident hasn’t been uttered by anyone except her in at least half a century, but according to the Farmer’s Almanac, it’s good luck to say “rabbit, rabbit” on the first of the month, because rabbits have traditionally been seen as being good luck. I don’t know what a tin shed or a pile of leaves has to do with rabbits, but we’ll take SJP’s word for it.

NEXT UP
The Art Issue 2022
True Life: My Partner Is Obsessed With NFTs
Culture
Allie Rowbottom’s Novel Aesthetica Isn’t About Instagram — It’s About Survival
Culture
An Exhaustive Breakdown Of The Balenciaga Controversy
Culture
Spotify Wrapped Is The Only Social Media That Doesn’t Lie