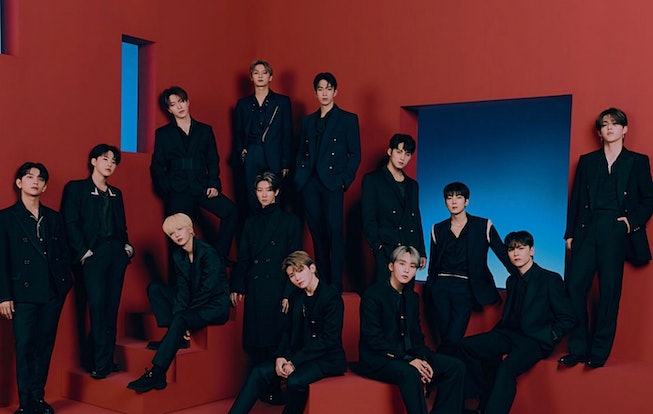 It’s hard being a fan of bands that are based nearly 7,000 miles away. They may not be coming to the United States soon, but if you want your live K-pop fix, you’ll soon have the chance — especially if you’re a Carat, or a SEVENTEEN superfan. The 13-person K-pop boy band announced they are playing a massive online concert titled “POWER OF LOVE” next month at the KSPO Dome in Seoul, where the 1988 Summer Olympics were held.

“POWER OF LOVE,” will center around the vague but powerful concepts of “power” and “love” and will be held across different stages in the dome on November 14 and 21 at 5pm Korean Standard Time, which is 4am Eastern Time. (Set those alarms!) There will also be a delayed single-view streaming option, which is on November 20 and 27 at 11am KST, or 10pm ET, which is maybe a better option for those of us wanting to rock out in the U.S. The concert is likely part of SEVENTEEN’s 2021 Power of Love project, which started with the release of Mingyu and Wonwoo’s duet “Bittersweet” in May.

The announcement comes just a few days after the group released their ninth mini-album Attaca, which features the bouncy single “Rock With You.” Sadly for fans of The8 and Jun, the Chinese members of the group recently returned to China, where they’ll stay for the remainder of the year.

Speaking of favorite bands 7,000 miles away, BTS also just had a virtual concert. “Permission to Dance On Stage” was held this past weekend, hot off the release of the BTS-Coldplay collab, a duo we never thought we’d see but somehow also makes a lot of sense. It was live-streamed from Seoul’s Olypmic Stadium and viewed by a whopping 197 countries.

Ticket sales for “POWER OF LOVE” begin on October 29 at 12 pm KST, which is 11 am EST. Seeing SEVENTEEN isn’t cheap, not even for a live-streamed show: A one-day ticket cost 49,5000 won, which, for those of us who haven’t mastered our conversion rates even after watching Squid Game, is approximately $42 USD, while a two-day pass will fun fans approximately $77 USD. Official fan club members will have access to an HD multi-view option which includes four screens. (Is this the future of livestream concerts one where, instead of buying better seats you buy more screens?) Both one and two-day passes will be available at a link shared by the group’s official Twitter account.

Until then, watch the wholesome “Rock With You” music video.