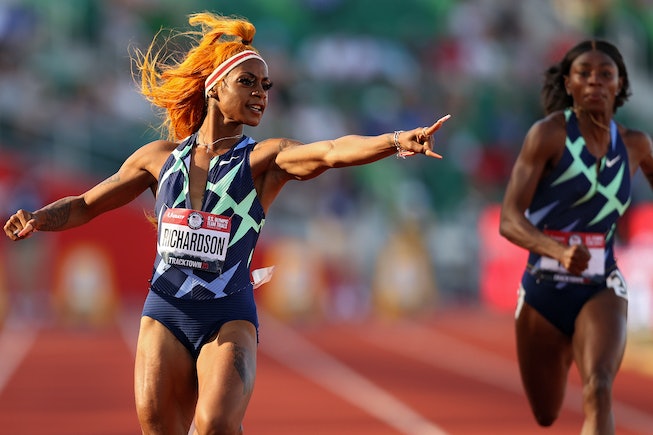 Rising, beloved track star Sha’Carri Richardson, who, last week was suspended from competing in the 100-meter dash at the 2020 Olympics after a drug test came back positive for THC, the active chemical in marijuana, will officially not be competing in any event at this year’s games.

Richardson’s suspension from the 100-meter dash has started a debate about marijuana drug policy in the United States, which, despite being recreationally legal in 19 states (including Oregon, where Richardson took the drug test) is still illegal on a federal level. Richardson apologized and admitted to using marijuana to cope with the death of her mother, which happened a few days before her race.

Despite the suspension, there was still a chance for her to compete on the relay team. Track officials are allowed to pick two athletes for the relay regardless of how they perform at the trials. But on Tuesday, U.S. track officials announced that Richardson would not be included.

In a statement, U.S.A. Track and Field said that while they think the rules around marijuana should be reevaluated, those rules shouldn’t be amended now: “While USATF fully agrees that the merit of the World Anti-Doping Agency rules related to THC should be reevaluated, it would be detrimental to the integrity of the U.S. Olympic Team Trials for Track & Field if USATF amended its policies following competition, only weeks before the Olympic Games,” they wrote.

The World Anti-Doping Agency (WADA) changed its policy this year to reduce the time professional athletes would be banned from competition for recreational drug use, lowering the ban from one to three months instead of two years. But there have long been calls for WADA to remove marijuana from its list of in-competition banned substances, particularly since it doesn’t enhance performance.

Despite being wronged, in true, bold Sha’Carri Richardson style, she tweeted that she’ll be back next year to be our World Champion.

NEXT UP
Culture
How Fragrance Posting & Niche Perfume Houses Evolved The Scent Industry
Culture
Elliot Page Reveals Pageboy, His Forthcoming Memoir
Culture
“Goblin Mode” Is The Word Of The Year
The Art Issue 2022
True Life: My Partner Is Obsessed With NFTs