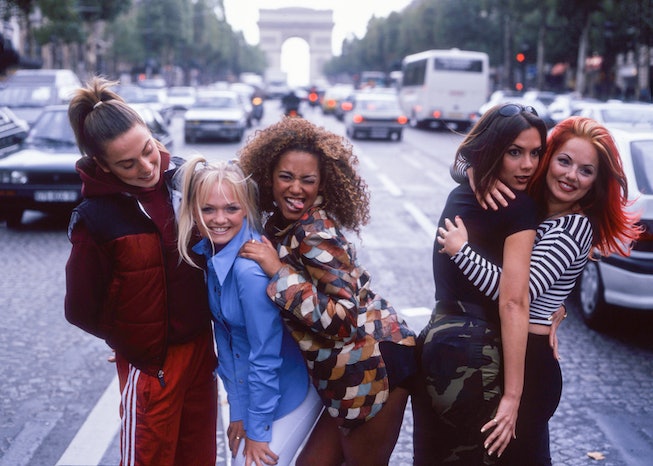 The ‘90s nostalgia machine may continue its grip on culture at large, but on the bright side, it gives us the chance to celebrate things that really matter — like the 25th anniversary of the debut album that changed everything, Spice by Spice Girls.

As one of the UK’s finest cultural exports, Spice Girls are doing it up for the celebration, releasing a deluxe edition featuring bonus tracks, b-sides, and previously unheard recordings. Spice25 will be curated by the band themselves, and will be released as 2CD set inside an A5 hardback book on Oct. 29. Spice25 will appease both digital and analog lovers equally; the pop stars will release an Apple exclusive remastered edition of the original album using Dolby Atmos, as well as a selection of vinyl and cassette versions. Until the official Spice25 release next month, Spice Girls are wetting palettes worldwide with a new, funkier version of “Say You’ll Be There” with Judd Lander’s harmonica replaced by a saxophone solo.

“All I ever wanted was to be accepted and to make everyone around me – gay, straight, brown, black, shy or loud like me – to feel they can celebrate who they are and to be free to be themselves,” said Mel B, aka Scary Spicy, regarding the anniversary. “All I hope – 25 years on – is that message has been heard loud and clear. It’s true that in the end love IS all you need so I thank everyone who has ever bought a Spice Girls record or stood in the rain to greet us or got dressed up in pink, in a tracksuit, a ginger wig, a leopard print catsuit or put on Vic’s iconic pout!”

Geri Halliwell, the artist formerly known as Ginger Spice added: “From the first wannabe baby steps to conquering the whole world with a team of Spices, thank you doesn’t seem enough to all of you who have supported us, followed in our footsteps, walked in our great big shoes and who have shared our dreams. It’s been 25 years of pure magic. Spice Girls forever!”

Listen to the Spice25 version of “Say You’ll Be There” below, and read on for more Spice Girls anniversary news.

Nostalgia is one of the most powerful forces on the planet. It resurrects films and television shows from the dead on a regular basis, has people dressing like they did when they were 13, and now it has its sights set on one of pop music’s biggest girl group sensations: Spice Girls. The era-defining UK pop stars are back with new music for the first time since 2007, releasing a new track titled “Feed Your Love” as part of the 25th anniversary of their breakout hit single, “Wannabe.”

For the uninitiated, “Wannabe” catapulted Spice Girls into worldwide stardom, topping the charts in 37 countries, then continuing on to become the seventh best-selling debut single of all time, as well as the longest-reigning Number 1 by a girl group. The “Wannabe” celebrations include a four-track EP, Wannabe25, which drops July 9 on streaming services followed by physical copies of vinyls and cassettes on July 23.

The new track “Feed Your Love” is a demo of a previously unreleased number from “Wannabe” co-writers Richard 'Biff' Stannard and Matt Rowe that was shelved back in the day because it was considered too “racy” for Spice Girls’ audience. (That’s a little hard to believe, considering another Spice Girls banger “2 Become 1” is one of the raunchiest songs to ever get air time, but alas!) “Feed Your Love” is being described as a “a slow, soulful ballad” and features vocals from all the women, including the famously mum Victoria Beckham aka Posh Spice of “little Gucci dress” fame.

Fans had been hoping Spice Girls would whip something up for their 25th anniversary on the pop scene, and with news of a new EP, perhaps hopes of a tour aren’t too far off from reality. “People need a bit of entertainment. Music brings people together. I would love it as soon as the rules allow it,” said Mel B back in January, per The Mirror. “Us lot are definitely up for it. It's just a case of timings and safety. I'm always itching to get back on to the stage.”

NEXT UP
Culture
Aly & AJ's "With Love From" Video Is A Postcard Of Melancholy
Culture
A Third Princess Diaries Film Is In the Works
Culture
Jenna Ortega’s Childhood Hobbies Included Animal Autopsies
Culture
Remember When Gossip Girl Made The Quintessential Thanksgiving Episode?