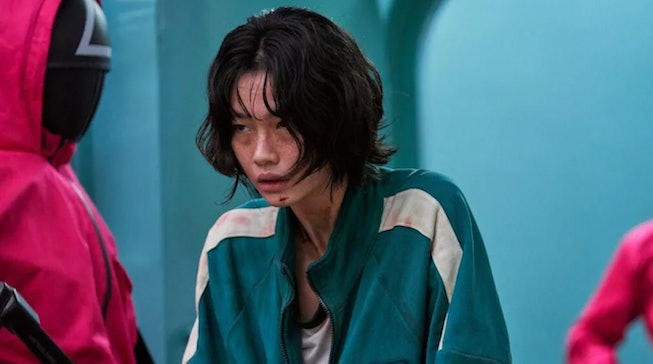 By now you know the drill. If there’s anything remotely popular happening in culture, the Twitter gods bequeath us with a never-ending stream of memes. Even when there’s an all-day Facebook and Instagram outage, Twitter is there as always to guide us spiritually and mentally through the throngs of pop culture. And there’s nothing more popular happening in pop culture right now than Squid Game, the South Korean Netflix show about a group of people facing crippling debt who play a deadly game in hopes of winning the a massive jackpot to be able to pay it off.

Have you looked at at your timeline lately and wondered, “What the hell is this giant freaky doll, and what does she want from me?” That’s Squid Game, baby! As far as memes go, there’s a lot of raw material to work with when it comes to smash Netflix program: Matching tracksuits with white Vans, a cast of stunning hotties including the heavenly model-turned-actress, Jung Ho-yeon, the aforementioned animatronic, executioner doll that shoots people in a horrifying rendition of the childhood game Red Light, Green Light, the looming specter of a life lived under astronomical debt, and so much more.

Netflix CEO Ted Sarandos — who, every day is getting as rich as the promised jackpot in the series — recently said the show is on track to be Netflix’s biggest ever, outpacing the Edwardian salaciousness of Bridgerton, the camp of Stranger Things and the 60s styling of Queen’s Gambit. And we all know the bigger the show, the funnier the memes. See all of the best Squid Game memes the internet has to offer, below.

Something for the fashion week devotees

You’re telling me a squid made this game?