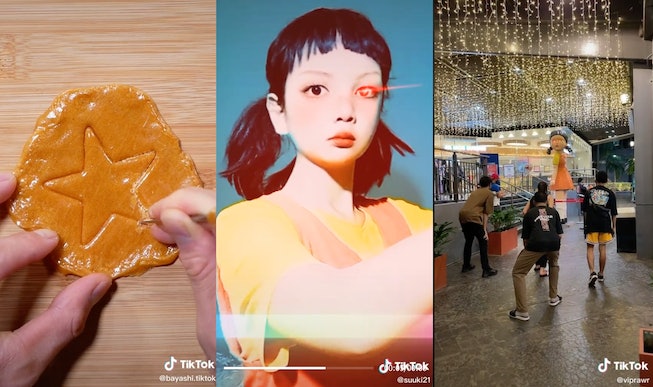 TikTok can’t get enough of Squid Game, Netflix’s new dystopian Korean show that’s become the platform’s most popular since premiering earlier this month. The show, which feels part Hunger Games, part very twisted obscure Game Show Network series, is about a group of people who, facing economic disaster, join a game series to try to win money — but they soon learn seemingly innocent games like red light, green light and tug-o-war are deadly — and if they lose, they’ll be killed.

Now, TikTok creators are reenacting the games on the platform, and thankfully, it’s in a non-deadly way. (Please, we can’t handle another cinnamon challenge!) The show is as wildly popular on TikTok as it is on Netflix: The hashtag #squidgame has a staggering 12.9 billion views. The main Squid Game-inspired video centers around the red light, green light — the recess game where someone yells “green light,” and everyone runs towards them, but when they turn around and say “red light,” everyone has to freeze or be eliminated. It’s wholesome, elementary school fun, except that in the show, the person is immediately shot.

The videos use a sound clip uploaded by TikTok user Yovinca Prafika, of the doll singing in a high-pitched, creepy lullaby voice: mugunghwa kochi pieotsumnida, which is what the Korean version of red light, green light is called. In many of the videos, users are visiting a mall in the Philippines that has a terrifying 10-foot replica of the doll. Groups of people creep behind it until it turns its head, its eyes turn red and everyone freezes. But for everyone else, there’s Roblox reenactments or some double-screen action.

The other Squid Game-inspired video users are creating involves attempting to cut a shape out of dalgona candy, a toffee-like snack that’s a popular Korean street food that vendors will sometimes give you for free if you can carve it into a shape without breaking it. In the show, players have to carve either a star, an umbrella or a circle using only a sewing needle.

And of course, as with any fandom, there’s a slew of videos of theories and memes — but our favorite is the people who dress up as the creepy doll, which will undoubtedly be an overused, yet very chic, Halloween costume this year.