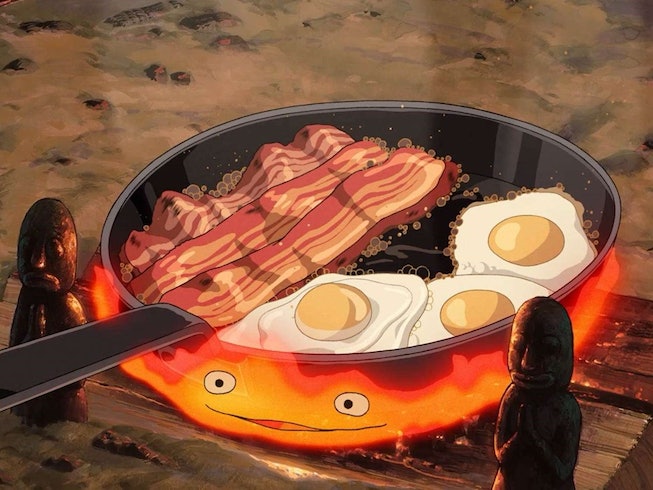 Part of the most entrancing details of the magic that is Studio Ghibli films is the food. In the world of Studio Ghibli, the sensory aspects of food are dialed up; there’s something strangely soothing about watching characters in Spirited Away gouge themselves on red bean buns, or bento from My Neighbor Totoro, or the scrumptious bacon and eggs from Howl’s Moving Castle, with ASMR-like sizzles and slurps.

Now, there is yet another cookbook inspired by the fare in Studio Ghibli films. The Studio Ghibli Cookbook: Unofficial Recipes Inspired by Spirited Away, Ponyo, and More! is a culinary tribute to the studio’s ouvre. Written by Minh-Tri Vo and translated Lisa Molle-Troyer and featuring 20 recipes, it will be released on October 25. Including the seafood salad from the lesser-know When Marnie Was Here (2014), nut cake from Nausicca of the Valley of the Wind and herring and pumpkin pie from Kiki’s Delivery Service, the book is a gastronomical tribute to some of the most well-animated dishes of all time.

This season marks a special time for Studio Ghibli fans across the globe, as the long-awaited Ghibli theme park opens in November in Nagakute, about 90 miles east of Kyoto. The first attraction that will open will be the My Neighbor Totoro house, which guests will be able to enter. Attractions inspired by Princess Mononoke, Howl’s Moving Castle and Kiki’s Delivery Service will open later this year. A little closer to the U.S., My Neighbor Totoro is also currently being adapted for the stage in London, premiering in early October and running through January.

And in even better Studio Ghibli-related updates, Hayao Miyazaki, Studio Ghibli’s auteur director, announced last year that he will come of retirement to bring his favorite childhood book How Do You Live to life. Why? “Because I wanted to,” he told The New York Times in his first interview with an English-speaking outlet since 2014. What a concept!

In the meantime, while you browse flights to Japan or London, the easiest way to access Studio Ghibli magic is to simply log on to your roommate’s parent’s HBO Max account, which is currently the most reliable place to stream Miyazaki’s masterful collection.

The Studio Ghibli Cookbook is available for pre-order on Amazon for $29.99 and is out October 5.