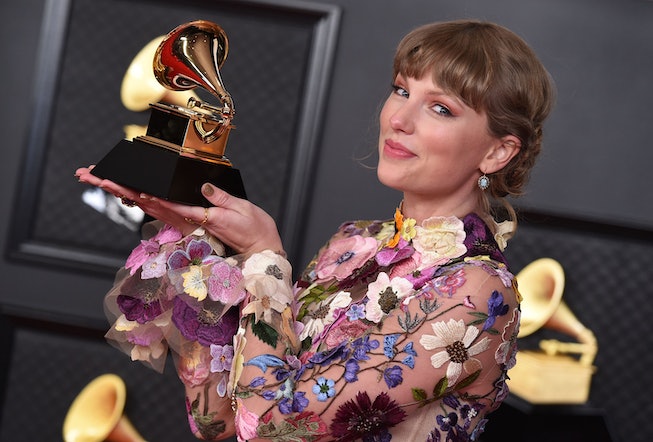 Taylor Swift fed her fans some crumbs on Twitter this morning, posting a teaser trailer for her Red (Taylor’s Version) album out November 19. In classic Swift fashion, the post made nothing explicitly clear and instead opted for level 10 cryptic messaging. The post shows an animated video of garbled words flying out of a vault, with earthy tones and quietly garbled vocals that are impossible to make out, that don’t sound unlike a Lana Del Rey song. Below, we try to answer some questions about the post, of which there are many.

The post reads: “*presses post* *cackles maniacally* Level: casually cruel in the name of being honest.” Swift is of course evoking the pain of her Red banger “All Too Well,” and guess what? Maybe we are a crumpled up piece of paper lying here!

Has she done these shenanigans before?

Yes. The pop star has always been known for leaving cryptic clues as to what her next releases are in promo art and videos for her albums. In April, she gave fans a golden vault of letters to decode in advance of the rerecording of her sophomore record, Fearless.

Okay, but do we actually know anything about her next release?

In June, Swift announced her next re-recorded album would be Red, which would include 30 songs that were originally meant to go on the album, including one 10-minute song.

Some Swifties have taken it upon themselves to solve Swift’s little riddle, positing that the words might reveal a crossword or word search puzzle, which uncovered “phoebe bridgers” and “zayn,” possibly teasing some future collaborators.

The sleuths of the Swiftie community took it a step further, laying out the words into a square grid to see what they reveal. Other pointed out possible song titles they could see, including “Better (Man),” and “Minute + Version (All Too Well).”

In case you somehow missed it, Swift is rerecording her music catalogue after a long and complicated battle to buy back her masters from Scooter Braun.

As with any Swift-related clue drop, Twitter is nothing short of a frenzy. Amidst the tweets from serious sleuths, other tweets ranged from sheer delight to expressing frustration over feeling obligated to solve the riddle Swift has bequeathed on us on an otherwise pleasant Thursday morning. Some of us have jobs!

The singer didn’t leave her legions of fans in the dark for too long. “I know some of you thought that would be like trying to solve a crossword and realizing there’s no right answer BUT…you played it good & right,” she wrote on Instagram. “Congrats pals, you guessed the correct titles and feature artists on Red (my version).”

Swift wrote that the Red vault tracks will feature Chris Stapleton, Phoebe Bridgers, Mark Foster, as well as the first song she and Ed Sheeren wrote together when they met in 2012.

“I can’t express my gratitude enough to these artists for helping me bring these songs to life,” she continued. “I can’t wait til we can dust off our highest hopes and relive these memories together. We’ll also be making a bunch of new ones too, since Red (Taylor’s Version) includes so many songs you haven’t heard yet.”

She closed her statement with a lyric from the titular single “Red” because at the end of the day, she can’t help herself! See the whole thing, below.