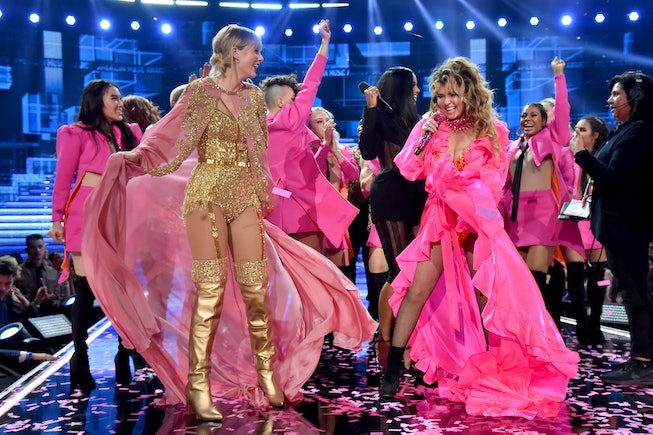 Taylor Swift’s impact on country-pop can’t be denied. The girl is a master at what she does. There’s never been a hook that Swift couldn’t make catchy, and her sincere, narrative songwriting is the reason Olivia Rodrigo burst onto the music scene with a song about one of life’s most mundane tasks, getting a driver’s license. Swift knows who helped pave the way for her music to go from Tennessee country girl to global pop superstar, and she hopped on TikTok to let everyone else know, too.

The singer did her own take on the viral “Mama Said” TikTok trend in order to pay tribute to the perennially unimpressed woman who never cared if you’re a rocket scientist, Brad Pitt, or have a car: Shania Twain. Swift challenged the thought that “country girls can’t go pop” with photos and videos of Twain, and captioned the video “learned from the best.” No lies detected!

It’s a sweet moment, and thanks to the innumerable powers of TikTok, it only gets sweeter. Twain then did her own take on “Mama Said” with the same caption — but this time, the mama in question was none other than the longtime queen of country, Dolly Parton. Swift then did a TikTok duet with the video and propelled into full-on fangirl mode, calling the two trailblazers the queens of her heart. Who amongst us could keep it cool? “I have ceased to be a person anymore,” Swift captioned the video. “I have exploded into a cloud of confetti hearts.”

Swift shifted from her Tennessee country girl roots to greater pop with the release of 1989, which won her both album of the year and best pop vocal album at the 58th Grammy Awards in 2016. Twain had kind words for her back then, too. "I think that everybody should just follow their heart and do their artistic best, and just enjoy their creativity," Twain told ET Canada at the time. "She's a singer-songwriter-performer. She does it all ... the world is her oyster."

Parton has also long been vocal about her admiration for Swift and her work as a woman in country music. "She knew exactly who she was, she had her dream and she stuck with it," Parton told People in 2015. "That's what you gotta do. I'm just so proud of her." Is it safe to call Twain and Parton Swifties? I don’t see why not! For now, watch the tender TikTok saga unfold, below.