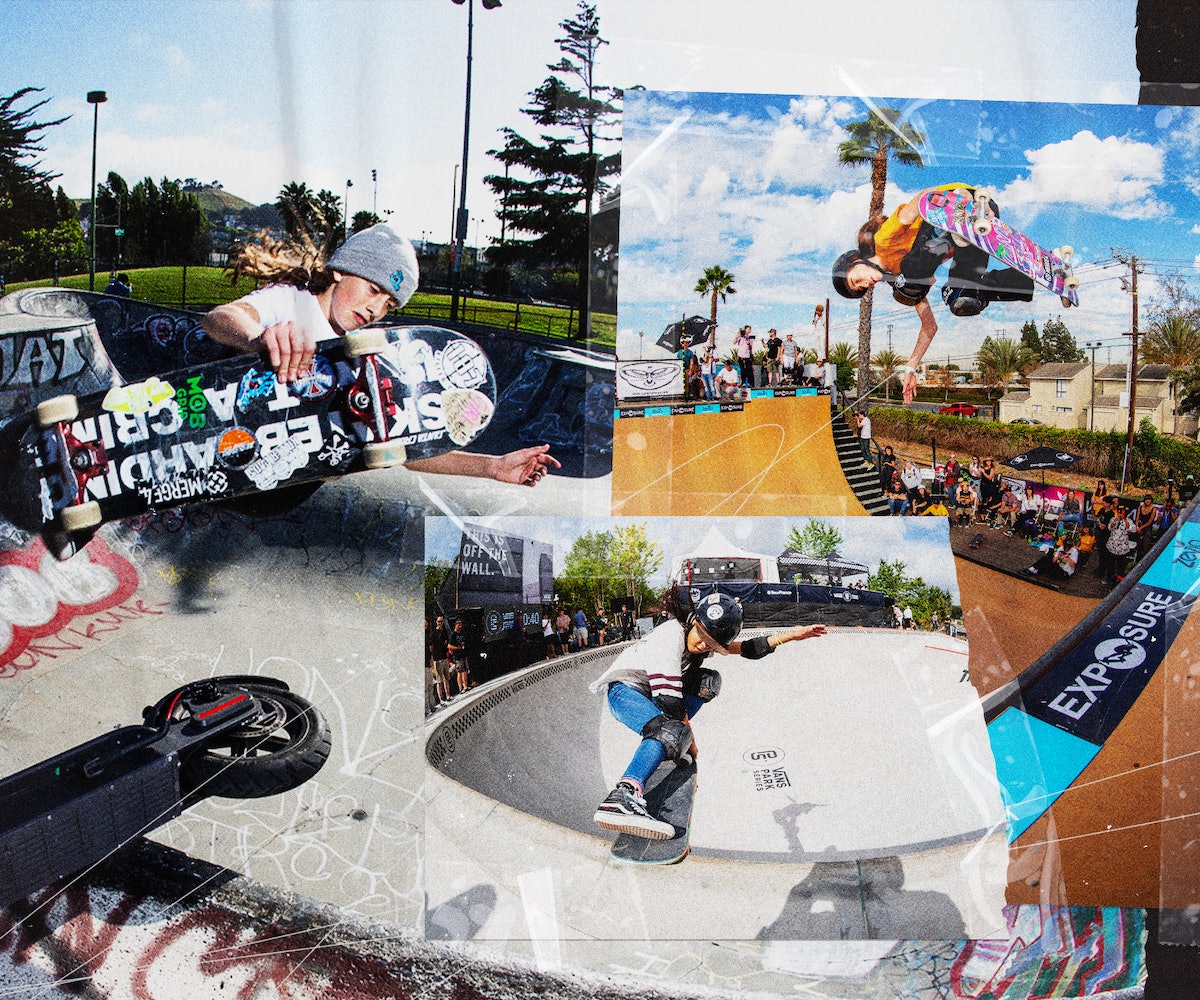 Minna Stess didn’t necessarily wake up anticipating a win. Really, what she wanted on that day in May was to land her tricks and finish her runs clean. But during the 15-year-old’s second run during the park skateboarding finals at the U.S. national championships in Vista, California, she went for it. She landed a kickflip off of the steeply banked side of the bowl, a trick she’d gradually dialed in over the previous few months till she could execute it consistently under pressure.

It pushed her into the lead — and she stayed there. “After the last few runs it was like, I’m still in first place,” she tells me recently. “It was pretty surreal.” She narrowly missed qualifying for the Olympics; instead, she was selected as a team alternate. But in Tokyo, teenagers, many of them roughly Stess' age or even younger and most of them women, continued to sweep the podiums. The gold medalist in the women’s street event was the Japanese skater Momiji Nishiya, then 13; the silver medalist, Brazil’s Rayssa Leal, also 13. Along with the bronze medalist Funa Nakayama, 16, they composed the youngest Olympic podium ever. (Competitive skateboarding often includes two disciplines: street, in which skaters attempt tricks on obstacles like rails and stairs, and park, where they execute routines on a course resembling a drained pool.)

OK, sure, teenagers skateboarding is not new. “There’s a whole pool of talented kids,” says Mimi Knoop, a former professional skater and the high-performance director and women’s coach of USA Skateboarding. (She also coached the U.S. Olympic team.) “That’s a reason skateboarding is so special.” Knoop cites Ryan Sheckler, who became the youngest X Games gold medalist ever at age 13 in 2003, and Nyjah Huston, who went pro at 11 in 2006. Nor are women skateboarders new; pioneers like Peggy Oki and Elissa Steamer are still celebrated in skate circles.

What is new, though, is the concentration of teen girls excelling right now at contests (as skateboarders call their competitions). Over the past few years, “a tsunami of talent presented itself on the women’s side,” says Brandon Graham, a longtime X Games skateboarding commentator. “All of the sudden, the kids are all right. Like, they have arrived.” Four years ago, Brighton Zeuner seized Sheckler’s title when she won an X Games gold one day after turning 13. Now, Misugu Okamoto, 15, is the No. 1-ranked park skateboarder in the world.

So where’d they come from? And why are they so good? Their visibility now reflects, in part, an overall shift in skateboarding — from the street to competitions — as opportunities for women to make a living skating start to catch up with those for men. Skateboarding history is littered with stories of girls who were solo among so many boys when they were starting out. That’s changing: Recently, a combination of pop culture (think Skate Kitchen), social media, and advocacy by skaters like Knoop, who was part of an equal-pay movement in the early ’00s, has helped foster a more inclusive atmosphere for girl and nonbinary skaters. There’s still room for growth, though. “I got a lot of crap from older girls,” Zeuner, now 17, tells me. (She competed on the U.S. Olympic team.) “I would be not included, or people wouldn’t say hi to me or would ignore me because I was a little one coming up.” Lately, she says, she and others like Bryce Wettstein, 17, have been trying to do better by younger girls.

The announcement that the sport was headed to the Olympics helped accelerate this existing momentum; Knoop tells me that’s when mainstream brands started getting interested in women skateboarders. I looked for evidence of this and found it: In 2017, Nike introduced its first skate shoe for women. That same year, Nora Vasconcellos became the first woman skateboarder to sign a pro sponsorship deal with Adidas. Around then, the pool of competitive athletes also widened: “It went from having the same crew constantly at the same contests,” says Jenn Soto, 25, a professional skater who was a member of the first U.S. national skateboarding team in 2019, “to seeing these new faces that you’ve never seen or heard before and they rip, and you’re like, ‘You’ve been under the radar? Where have you been at?’”

As a result, these teens have come up at a time when an increasing number of women skateboarders, like Lizzie Armanto or Letícia Bufoni, were demonstrating what a career could look like. They could see themselves reflected in the sport. “It’s very much based in the power of belief,” Knoop says. “Now, these young people have possibility models.”

Moments after Cocona Hiraki dropped in for her first run during the park finals in Tokyo, she popped over the lip of the pool, pressing the front of her board into the coping for a trick called a nose grind. The Japanese skater, then 12, glided through a series of grind tricks (to get technical: a feeble, a lip slide, a 5-0) and aerials that propelled her into second place. She won the silver medal. “I like to focus on what I like to do,” Hiraki, now 13, tells me over video chat, speaking through an interpreter, “and focus on the tricks that not a lot of girls are doing.” She adds that the topography of skate parks near her home in Hokkaido, where she lives and trains, is more conducive to practicing grind tricks than getting big air anyways.

It reflects something I heard repeatedly: The young skaters breaking out right now are honing reliable, signature moves that help close the gap with their older, more experienced peers. “You have to prove yourself,” Graham says. “I think one way you do that is you show consistency and you put down tricks that no one else is doing.” And though the variety and amplitude of tricks among girls still trails those of the boys, they also have an established arsenal pioneered by previous generations of skaters to select and build from. “When I first started skating in girls’ contests, there were like three tricks you had to do to win. It was always the same,” Zeuner says. (Early on, she looked at men’s skating for inspiration.) “Now, everyone has a different bag of tricks.” At the same time, kids are also expanding what’s possible on a skateboard: At 11, Sky Brown became the first woman to land a frontside 540 in competition; on the men’s side, this past July, Gui Khury, 12, became the first person to land a 1080 — three full revolutions in the air — off a vertical ramp during a contest.

But the kids’ and teens’ skills on their boards may also have something to do with having the time and energy to practice a ton without grown-up obligations (a lockdown year of extra time couldn’t have hurt) and the fearlessness to pick themselves up again when they fall. “It’s just easier when you’re young,” says Bombette Martin, 15, who skated for Great Britain’s Olympic team in the park event alongside Brown. “Especially being a girl, I can imagine it would be really hard to start when you’re a teenager, just because you’re all self-conscious.” And one consequence of the sport’s exposure is that more kids are inspired to get on their boards younger.

That’s not to say that kids will continue to dominate competitive skateboarding; after all, the youngest male skateboarding medalist at the Olympics was 18-year-old Keegan Palmer of Australia, who won gold in the park event. Soto predicted the current generation’s powers will only continue to grow as they rack up experience. “They’re going to truly be unstoppable, and I look forward to watching,” she says. “I’ll be rooting them on for sure.”

NEXT UP
Culture
Mowalola Teams Up With Bratz For A Daring, High Fashion Collection
Culture
In Cann’s Holiday Campaign, The Greatest Gift Is Being Chill
Culture
Simona Tabasco Is the Lifeblood of The White Lotus
Culture
A Britney Spears-Inspired Musical Is Coming To Broadway